When you think of Billfish, you probably imagine a monster Blue Marlin bursting out of the water, or a pack of Sailfish tearing through a tight ball of Ballyhoo. These are definitely the A-listers of the group, but there’s a lot more to them than that. Billfish are a whole family of fish, with eight species spread all over the world, from the surface to the murky depths below.

We’ve written a lot about Billfish over the years, so it only seems right to put it all together. Whether you’re looking for identification guides, techniques, tournaments, or top fishing spots for each species, you've come to the right place. We’ve rolled everything into one complete guide to the oceans’ most impressive fish family.

The four main types of Billfish are Marlin, Sailfish, Swordfish, and Spearfish. Marlin are the most diverse, with four separate species: Black, Blue, Striped, and White, in rough order of size. White Marlin live in the Atlantic; Black and Striped Marlin live in the Indo-Pacific; Blue Marlin live pretty much everywhere.

Sailfish and Swordfish are the only children of the Billfish family. Some people say that Atlantic and Pacific Sailfish are separate species, but the only difference is that they get bigger in the Pacific. Everyone agrees that there’s only one Swordfish, although some people call them Broadbill instead – because fish names are never that easy. 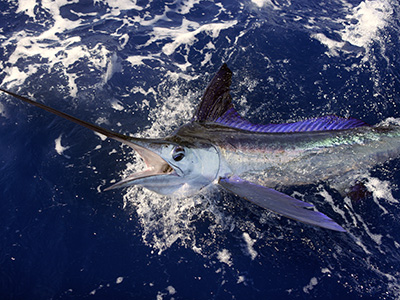 The world of comics has Batman and Superman, we, anglers, have Sailfish and Marlin! These mighty fish may... 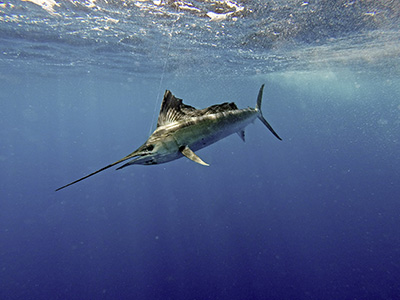 Sailfish and Swordfish are two of the most awe-inspiring fish you’ll ever see. Widely recognized as apex...

All Billfish have a distinctive look: sleek body, long fins, and of course, that signature bill. This makes them instantly recognizable, but tough to tell apart. Marlin are the trickiest, partly because there are so many of them, but the main way to identify them at a glance is by their dorsal fin.

In general, the bigger the Marlin, the smaller the dorsal fin, relative to their body size. Black Marlin are the biggest and fattest with the smallest fin, running through Blues and Stripes to White Marlin, which are the smallest with a giant, rounded fin. There’s a lot more to it than that, obviously, and we go into each species in detail in our Marlin fishing guide.

Sailfish are easy to spot thanks to the massive fin that earned them their name. Their sail runs from head to tail and is bigger than on any other fish. A Spearfish's dorsal fin also run the length of its body. However, it's much shorter, and sticks up higher at the front. Oh, and in case you didn’t guess, Longbills have longer bills than Shortbills.

Lastly, Swordfish. The thing that makes these guys different is that they’re built for power, not speed. Their tail is larger, their fins thicker and longer, and their bill broader than any of their cousins – hence the nickname, Broadbill. If that's not enough, Swordfish also have much bigger eyes to help them hunt in the dark waters beneath the surface. 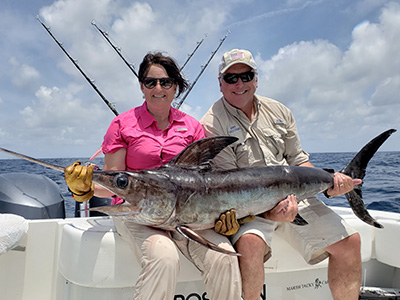 Swordfish are among the fiercest predators in the ocean, praised by anglers for their brutish demeanor and meaty... 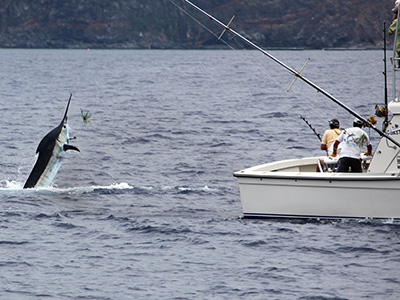 Marlin fishing is one of the most exciting challenges facing any angler. Marlin are fast, they’re athletic, and...

Billfish are very cool to look at, but the reason most anglers love them is the way they fight. Nothing will test your skills like a 500 lb Marlin on the end of your line. Even the humble Spearfish puts on a show when hooked. You’ll need the right gear and the right tactics to stand a chance against any of them.

The go-to technique on most billfishing trips is trolling. Setups vary wildly, from colourful spreads of lures and teasers to a single live fish. Sailfish guides sometimes fly kites to keep your bait skipping along the surface. Whatever you’re using, the logic is the same: pull something tasty-looking behind the boat and tempt nearby fish to bite.

Swordfish are a different story. These guys live hundreds of feet below the surface, and that’s where you need to catch them. They hunt closer to the surface at night, which makes them easier to target. However, some anglers also go swordfishing during the day, using specialized deep dropping gear. Think glow sticks, electric reels, and lots of patience.

None of these float your boat? Not a problem! People have caught Billfish in all sorts of crazy ways, from fly fishing to spearfishing. We’re not going to pretend these are easy, but with enough practice and a little luck anything is possible. 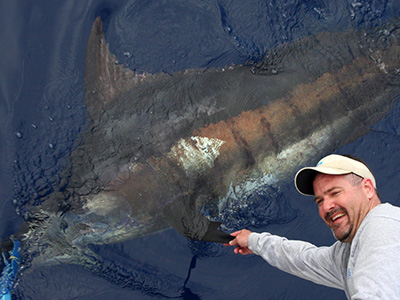 Ever since Ernest Hemingway’s Old Man And The Sea, Billfish have held a special place in... 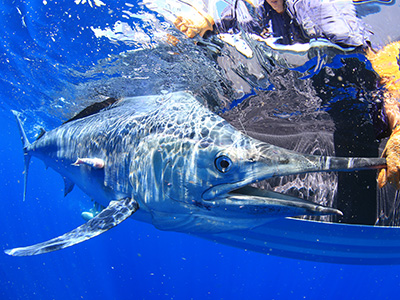 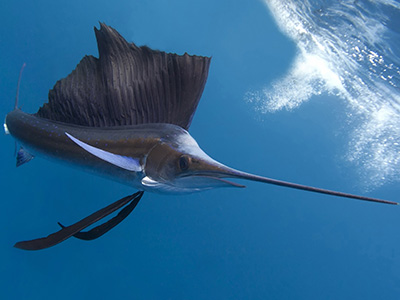 Looking out into the Gulf Stream, Florida’s Treasure Coast is perfectly suited for amazing offshore...

So, you’ve got your heart set on landing a monster. But where should you do it? Billfish prefer deep, warm water. Beyond that, a lot depends on your priorities, not to mention your budget. However, when it comes to the fishing itself, here are some of the best spots for each species. 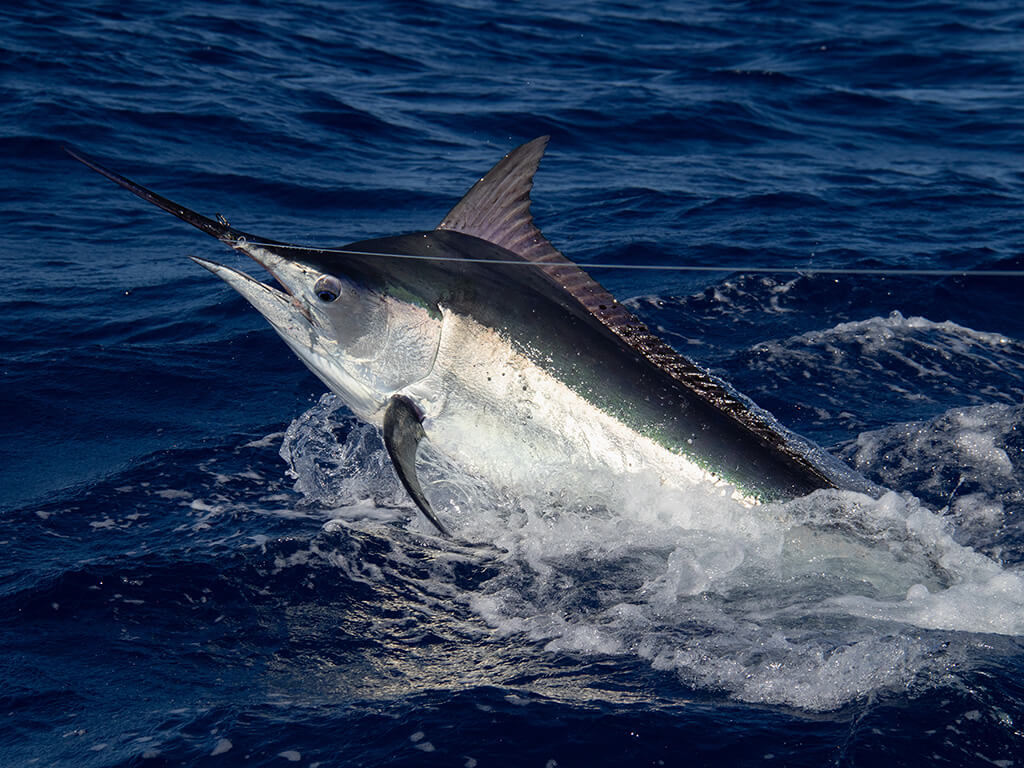 Cairns, Australia: Giant. Black. Marlin. We really don’t need to say much more. Heavy tackle season on Australia’s Great Barrier Reef is the stuff of legends, and Cairns is the best place to launch out from.
Panama City, Panama: Looking for a city break with world-class sportfishing thrown in? Look no further. Panama’s capital city has an outstanding Marlin bite, especially around the islands offshore. 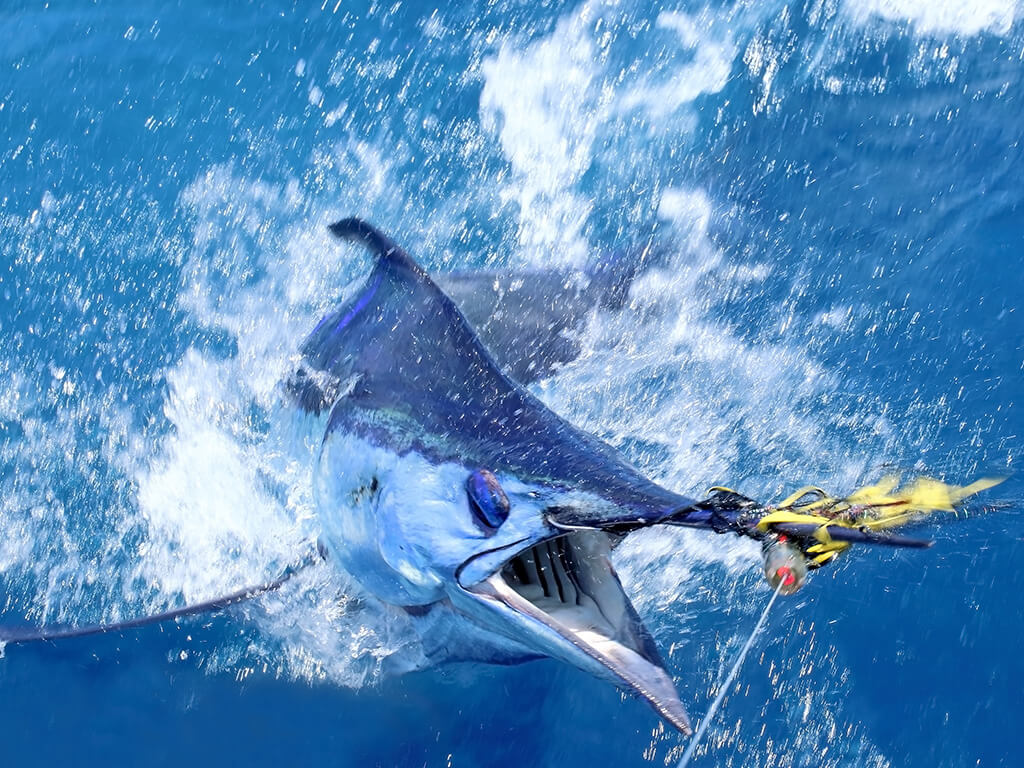 Madeira, Portugal: This small Portuguese island chain comes up time and again in the Billfish record books. Why? Granders are caught here every year, just a stone’s throw from shore, that’s why.
Watamu, Kenya: Kenya only made it onto the sportfishing map a few years ago, but it’s made a real name for itself thanks to some truly giant Marlin, with super-sized Sailfish as a bonus! 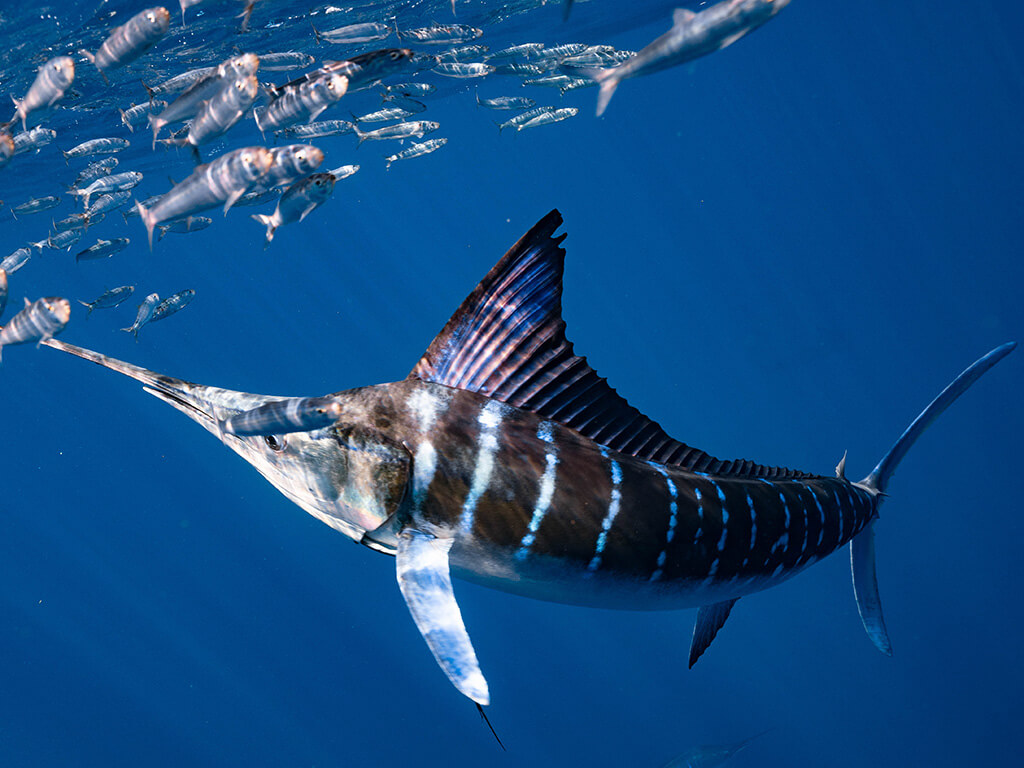 Bay of Islands, New Zealand: This is the best place for Striped Marlin, period. Over 20 world records were set for them around the remote islands off the north of NZ – including the all-tackle record.
Cabo San Lucas, Mexico: Cabo can’t compete with New Zealand, but it doesn’t need to. The fishing here’s amazing, for more than just Stripes. Plus, it’s a darned sight easier to get to for most people. 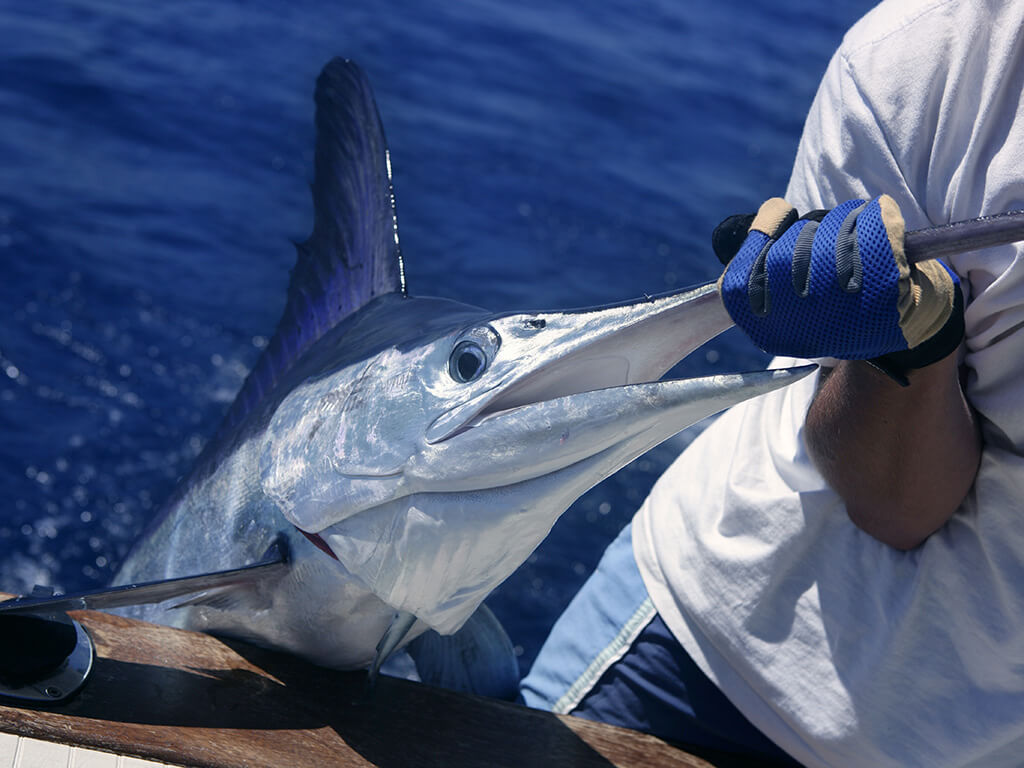 Ocean City, MD: Ocean City has some of the best and most consistent White Marlin fishing around. It may not be the most famous East Coast fishing spot, but when it comes to Marlin, this is the top dog.
Punta Cana, Dominican Republic: Punta Cana’s White Marlin season sees literally thousands of Billfish channeled straight past the island. Double-digit hookups are a real possibility here. 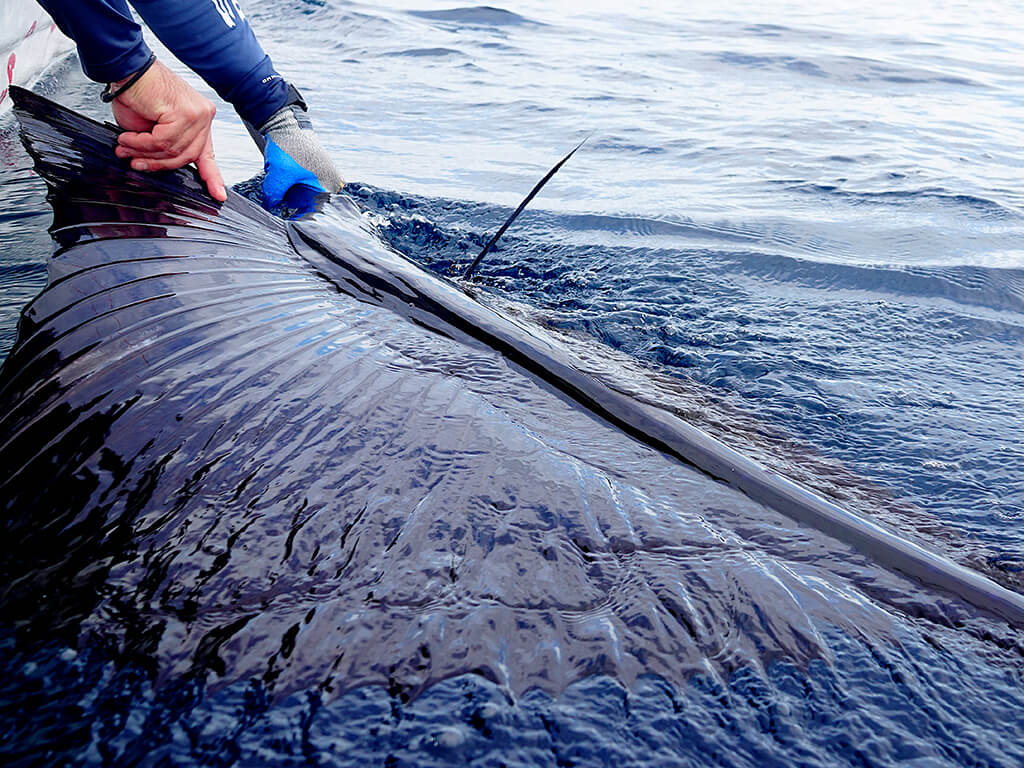 Jacó, Costa Rica: We chose Jaco because of the giant marina at the nearby Los Sueños resort. But honestly, the entire country is outstanding, with extra marks for its emphasis on sustainable fishing.
Stuart, Florida: Sitting in the middle of the infamous Sailfish Alley, Stuart has earned the title of “Sailfish Capital of the World.” And with packs of angry Sails just a mile or two from land, we can see why. 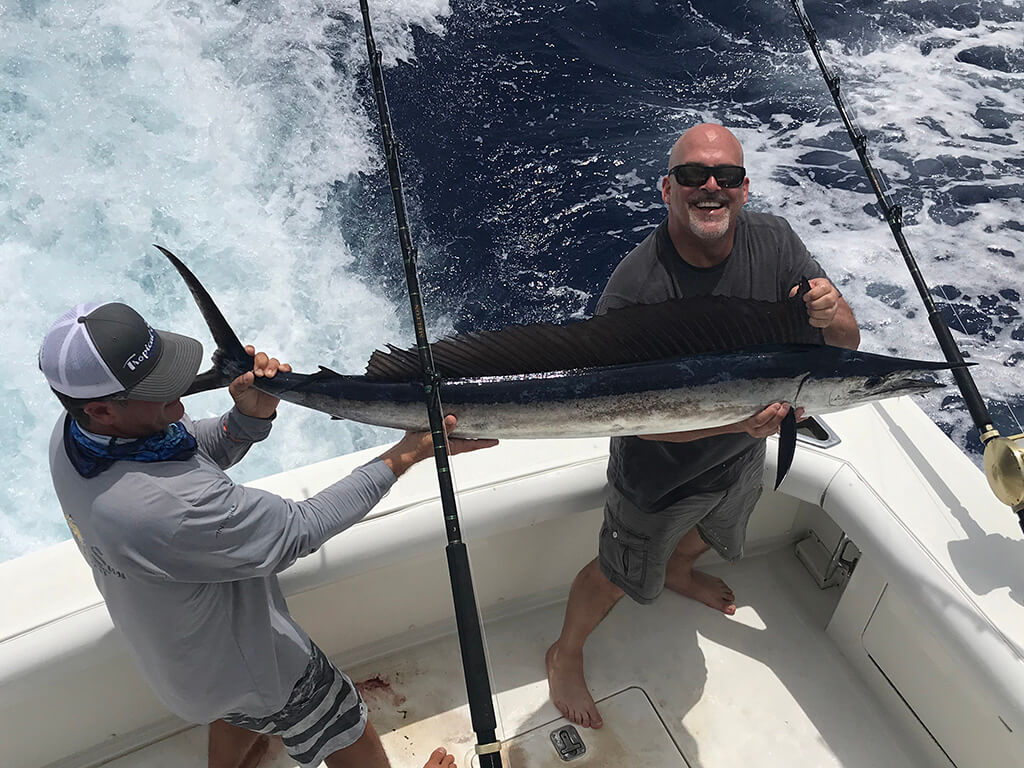 Kailua-Kona, Hawaii: There are only a few places on earth where you can actively target Spearfish. Hawaii's the best because even if you don’t catch a Spearfish, you'll probably hook a Marlin or three instead.
Mallorca, Spain: The Mediterranean is mainly known for its Bluefin Tuna fishing. But if you’re set on Spearfish, Spain’s Balearic Islands are about as good as it gets. They sure are pretty, too. 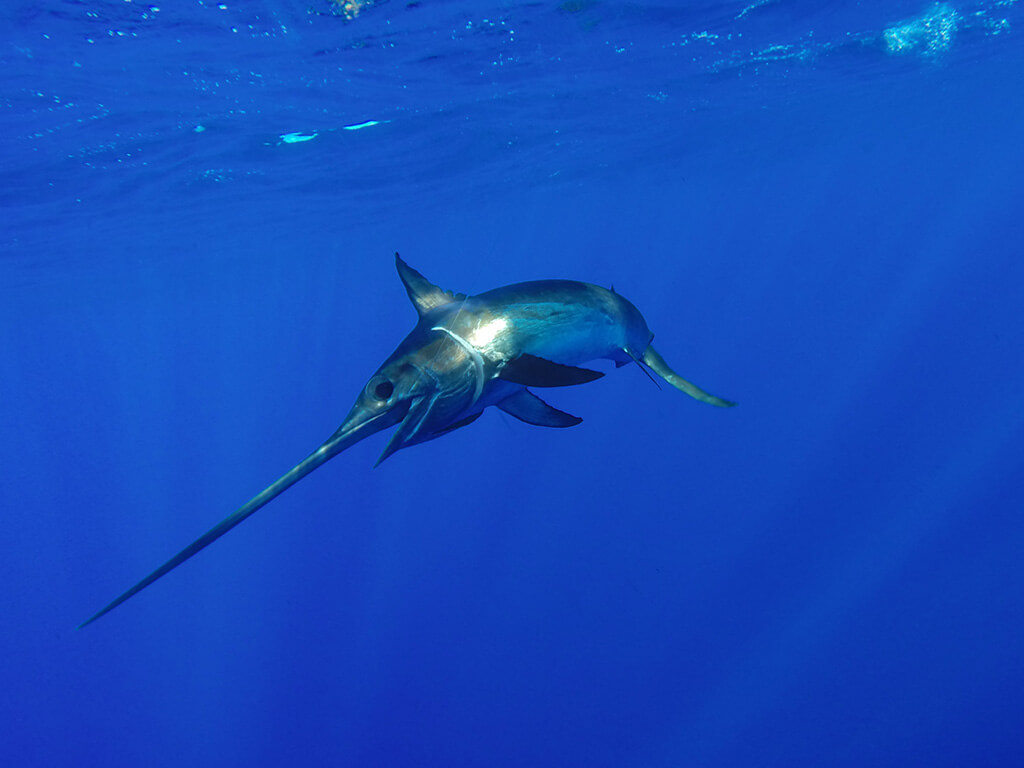 Keys, Florida: The Florida Keys are the heartland of swordfishing, as is nearby Miami. Daytime swordfishing was born here, and local captains are still the best in the business when it comes to Broadbills.
Bay of Islands, New Zealand: The Bay of Islands makes it onto our list twice, it's just that good. Truth is, though, the entire Northland Peninsula is a Swordfish hotspot – as is much of the country. 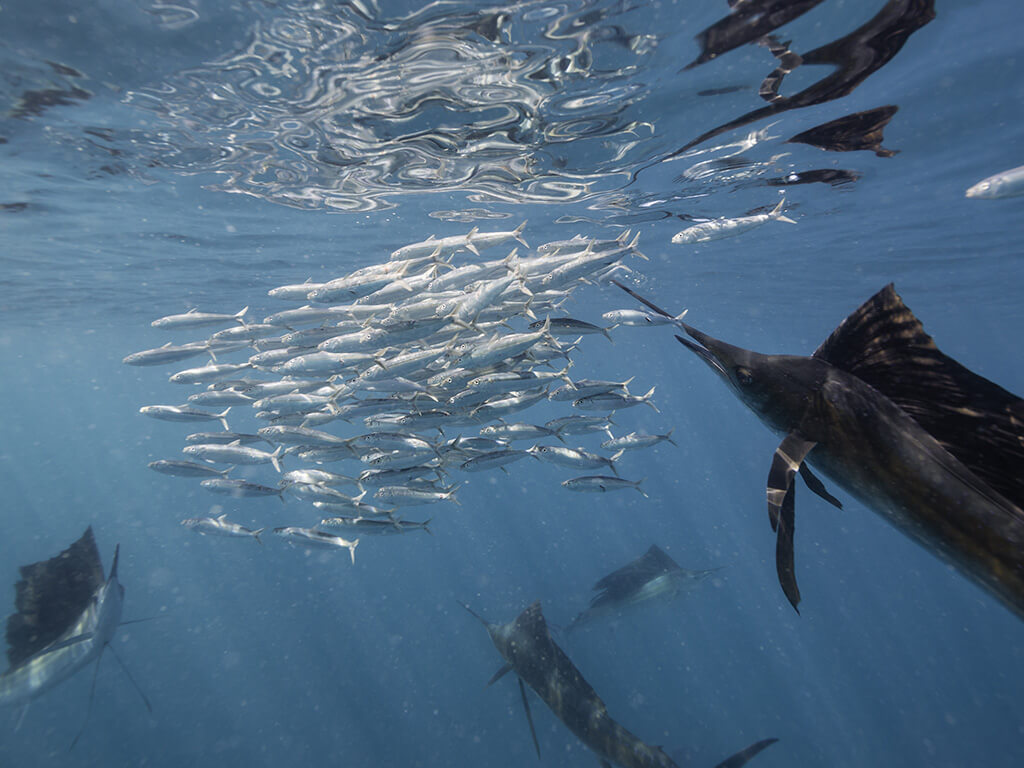 Cabo San Lucas, Mexico: If you want multiple types of Billfish in a single day, this is the place. Blue, Black, and Striped Marlin are all here, as are Sailfish, and even Swordfish if you know where to look.
Kailua-Kona, Hawaii: Kona is a magnet for big Billfish, with the same four Marlin species that call Cabo home. Hawaii doesn't get many Sailfish for some reason, but they do get a lot of Shortbill Spearfish. 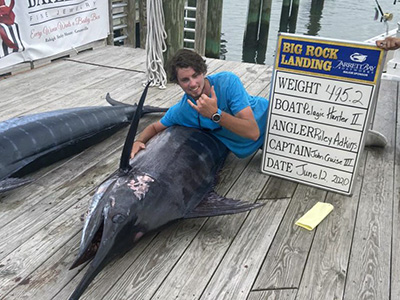 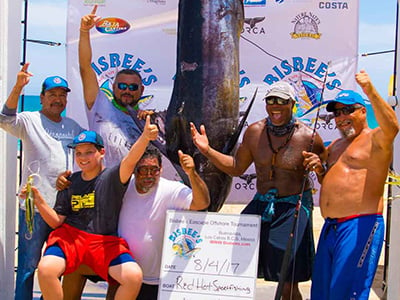 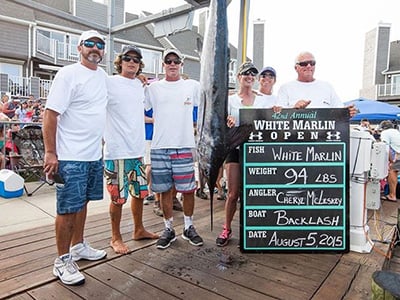 There are literally hundreds of Billfish tournaments around the world. We won’t go into every single one, but tournament fishing is such a big part of the billfishing scene we had to tip our hat to a few.

If you’re strictly about the Blue Marlin, Morehead City’s Big Rock Tournament is the one for you. Prefer Whites? Ocean City’s White Marlin Open is a must. Then there’s the Bisbee Black and Blue. This is the biggest, most famous tournament out there, with millions of dollars in prizes and the kind of parties you’d expect for such an extravagant event.

This is just the tip of the iceberg. But honestly, you'd need an entire book to cover every Billfish tournament in the world. Wherever you’re fishing and whatever you’re targeting, if it’s big and billed, you can bet there’s a tournament for it somewhere close by.

Billfish really are the ultimate species for ambitious anglers. Bass are fun, Salmon are exciting, but nothing beats the feeling of spotting a Sailfish basking on the surface, or the thrill of a Marlin bursting out of the water. People travel all around the world for a chance of catching them. If you ask us, that’s time well spent.