The United Arab Emirates is a nation defined by its oil. The country’s towering skyscrapers, luxury living, and political power all flow from its vast oil fields. What a lot of people don’t know is that the oil industry also has a real effect on the area’s fishing. And no, not in a bad way. Fujairah oil tanker fishing offers a unique angling experience. According to some, it offers the best sportfishing in the Middle East. 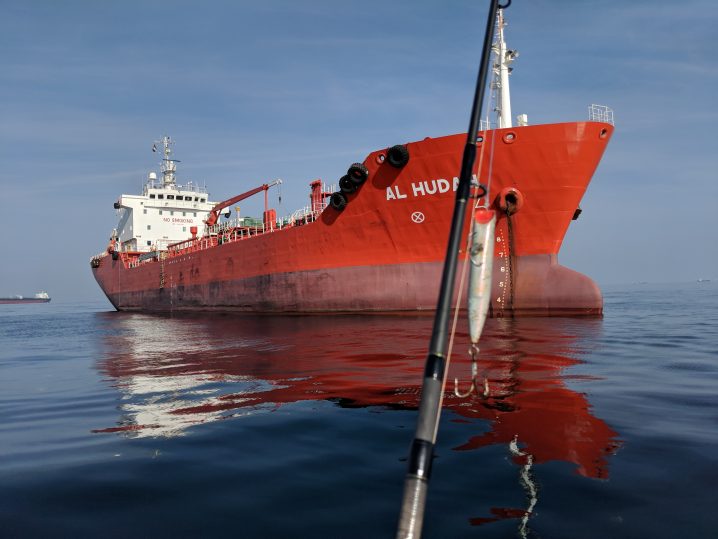 We had heard some great things about Fujairah’s tanker fishing. Bull Mahi and Billfish just a few miles from land. A wide range of tasty bottom fish hiding below. And bringing it all together, hundreds of ships holding a ton of baitfish. How true were the tales? We decided to check it out, so we jumped on a plane for a team building/fishing vacation. Here’s what we found.

We hit the marina late for our first day of fishing. Bleary-eyed and legs aching from the long flight, we clambered down the ramp toward our boats. We all jumped aboard and sped offshore, happy to feel the wind on our faces. Even in November, the mercury was in the mid-80s. We soaked up the breeze and got ready for action as the ships came into view. 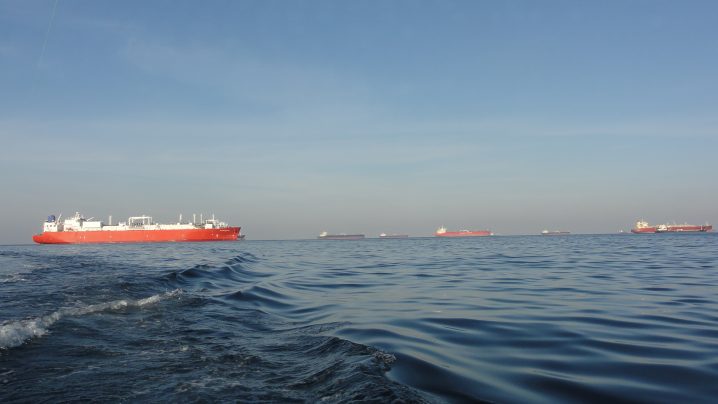 They may not look like much, but Fujairah’s oil tankers are some of the best fishing spots you could ask for.

You can find the whole food chain around Fujairah’s oil tankers, from Flying Fish to Snappers to Tiger Sharks and even Marlin. We had set up a light-hearted tournament to make the most of this during our two days on the water: catch as many species as possible, and land the biggest fish while we were at it.

We had barely gone 5 miles from shore when our captain, Johnson, started setting up. Our main target for the day was Sailfish, so Johnson threw out a spread of chugger-head trolling lures. He also set a lighter daisy chain on one side in case a Bonito took interest – you can never have too much bait. Besides, we weren’t set on just one fish. 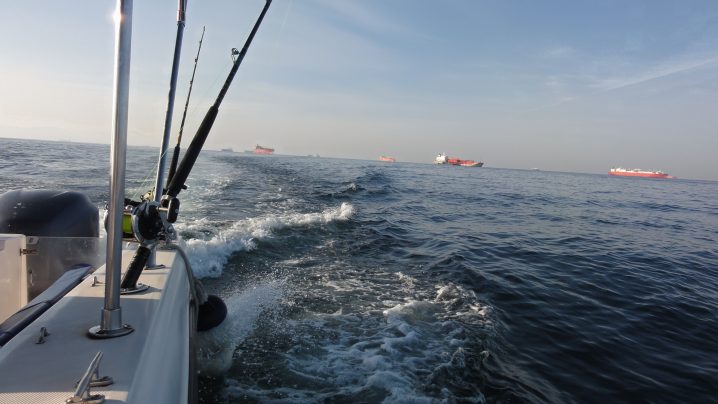 As we trolled around our first tanker, the crew leaned over the rails high above us and gave us a cheery wave. Some of the ships in the Gulf of Oman are docked for months or even years, waiting to sell their cargo at the right price. Watching people fish must break up the monotony of waiting at anchor. You can also imagine a certain pride in someone hooking up around your ship.

Sadly, today was not the day. Hour after hour, we trolled. Not a bite. Not even a bump. We re-rigged to try for Mahi, which are much more common than Sailfish. Still nothing. It seemed like Lady Luck wasn’t on our side.

“Are you eating a banana?” I heard someone say at the back of the boat. “Don’t you know that’s bad luck?” Now, I’ve never been one for superstitions, but it seemed a little too much for coincidence. Half the day trolling and not a fish in sight? If nothing else, we had found something to blame it on! 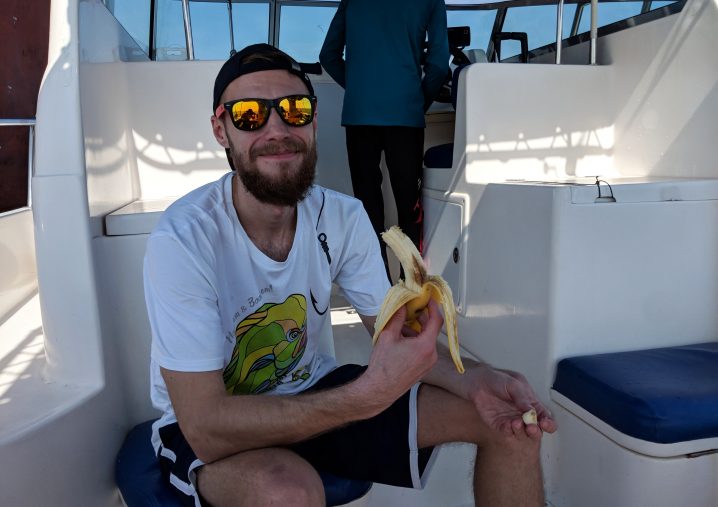 Was the banana bad luck or just well timed? Either way, the fish weren’t biting.

Banana eaten and the offending angler taught the error of his ways, we decided to change spots. Johnson said that the nearby marker buoys were great for Mahi. We threw out a couple of live baits and tested the water with poppers, too. We came up empty on the first spot, but finally saw a flash of yellow on the second.

“Fish!” I grabbed the rod and started reeling, but the line was snagged on the buoy. All of a sudden, it went loose. I reeled, but nothing happened. The fish had broken off. Would we never escape our bad luck?

The captain took the rod to re-rig. The line was almost to the boat when, suddenly, it went tight again. The fish was still on! A couple of less-than-expert attempts at gaffing by yours truly, and we had a fish aboard. Finally, our first Mahi. 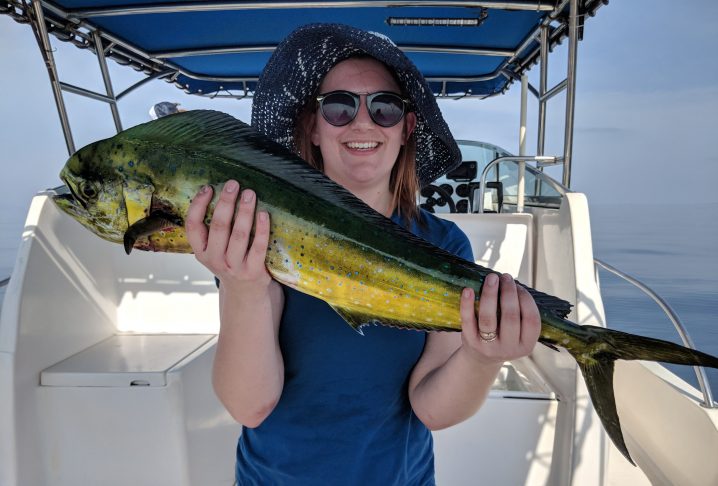 First, and last. By the end of day one, all we had managed to catch was one Mahi, one Bonito, and a couple of plastic bags. But back at the dock, it turned out that the other boats had done much better: 22 Mahi, a handful of Bonito, and a Golden Trevally to top it all off. Hopefully, our luck would turn on day two.

Good Omens for a Great Day

After a fishy feast and a few hours of sleep, we were back on the water early. This time, we were determined to catch fish. There were some good omens straight away. First, a school of dolphins playing on the surface. Next, a huge turtle basking in the morning sun. Suddenly, my fishing buddy, Cat, let out a shout: “Sailfish!” It was long gone by the time we circled back around, but it sure gave us a good feeling for the day ahead. 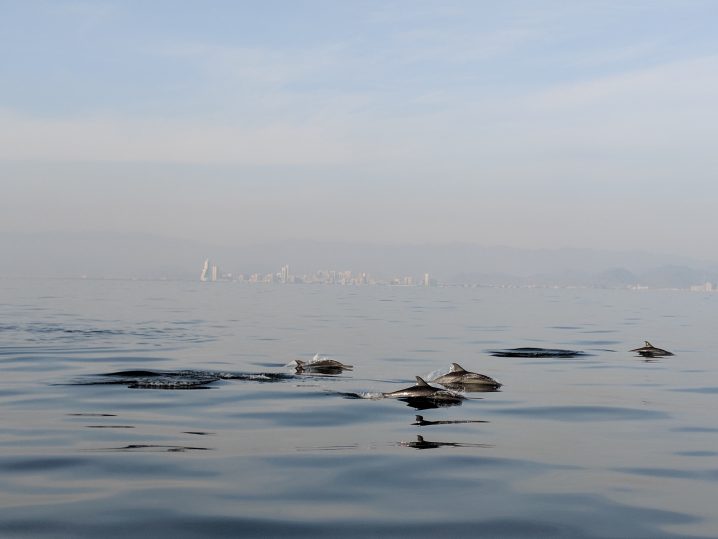 We started the day by casting, as that had landed our only fish the day before. Our new captain, Nickson, set out our live baits while I worked poppers off the front of the boat. The omens held true and we didn’t have to wait long. Within minutes, one of the baits disappeared and the line went tight. It was hardly a bull, but it was a fish. A quick photo, a safe release, and back to the action.

Things couldn’t be more different than the day before. Over the next two hours, we caught and released half a dozen Mahi, including a couple of decent-sized bulls. Despite my best attempts, the fish completely ignored the poppers, with only the briefest knock all day. It was the live sardines that they went crazy for. 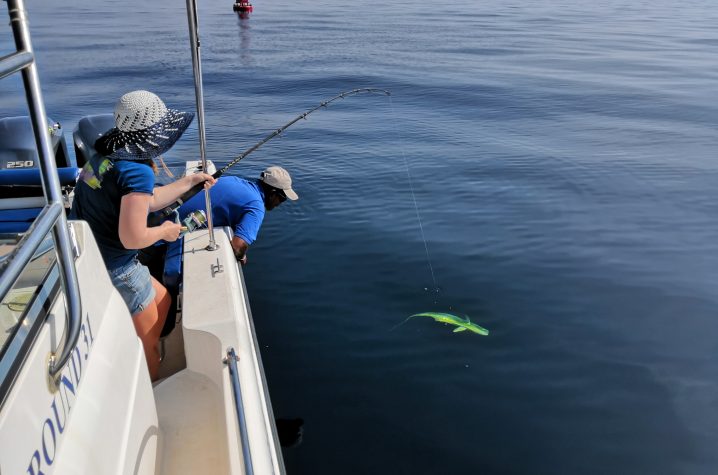 Mahi number three on the live baits. The fish clearly weren’t fooled by my topwater game.

The Mahi weren’t the only ones in the mood for sardines, either. We lost one to a baby Bonito, which we threw in the tank to use as bait. Just after that, the captain gave a shout and ran to the helm. He had spotted what we were searching for all trip: Sailfish. Two Sails basking on the surface right next to each other. This was our chance.

The captain turned the boat around while we rigged up our freshly-caught Bonito. But by the time we got to them, the fish had dived. We waited tensely, watching our lines and waiting for a hit. After a few minutes, the drag started chattering and the line went tight. It wasn’t a Sailfish though, it was another Mahi. Not what we were hoping for, but after our luck the day before, we weren’t going to complain. 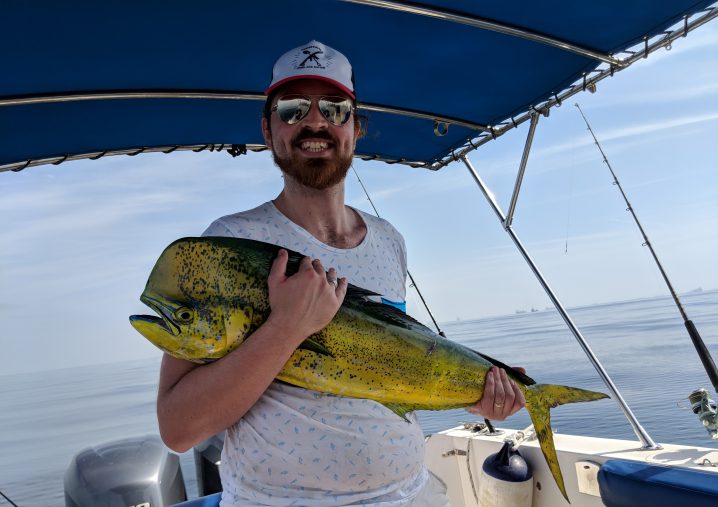 A Mahi is no Sailfish, but it’s much better than nothing.

More Than One Way to Fish an Oil Tanker

By this point, the sun was high and the heat was really setting in. We’d caught a load of Mahi and used up most of our baits, so we decided to switch to trolling. After a morning of constant casting, it was almost a relief to sit back and watch the lines. We were certainly happy to feel the wind again.

At the second ship we circled, we ran into some of our group working the tankers in a completely different way. A lot of fish like to lurk around the tankers’ anchor chains, so they were dropping jigs to maximize their species count. Clearly, they had high hopes of winning our great Fujairah oil tanker fishing tournament. Their main catch so far had been Threadfin Bream, known locally as “Sultan Ibrahim,” but you can also find anything from Rainbow Runner to Barracuda hunting along the anchor chains.

We dropped Sabiki rigs for bait while we chatted to the other teams, then wished them luck and moved on to troll a less crowded spot. After all, with almost 200 tankers to choose from, Fujairah fishing spots aren’t in short supply.

You know Fujairah has plenty of fishing spots when meeting another boat is an event.

Winding Down, Diving In, Heading Home

We trolled for another hour and caught a couple more Mahi. They seemed to be everywhere. We even saw one leap out of the water, a clear sign that there were bigger fish around, too. But whether it was a Shark or a Sailfish, we never found it.

We rounded off the day by diving off the boat – never miss the chance to swim in a new sea. Back at the dock, it seemed like Mahi had dominated the day. Some groups had gone to the edge of Emirati waters. Others had spent the whole day in sight of land. The one thing in common? Lots of Mahi and huge smiles all round after an unforgettable fishing trip. 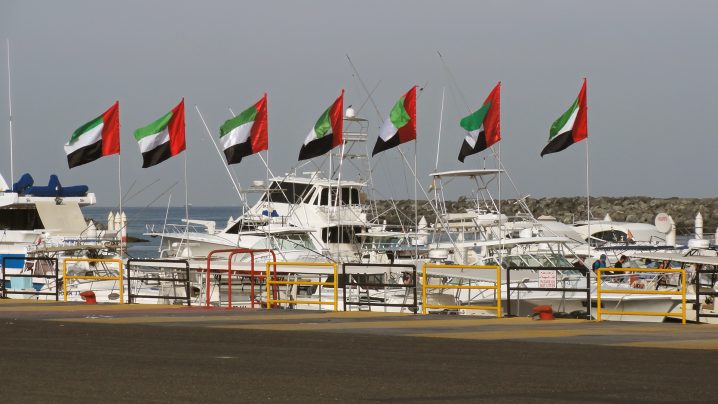 Thanks, Fujairah, you’ve been a blast!

A lot of us went fishing, and many of us for the first time. We learned a bunch during our trip and here are some tips worth passing on. I won’t bore you with the obvious ones like “keep hydrated” and “bring sunscreen.” instead, I’ll mention some often overlooked details:

Have you fished around big ships? Do you believe in the bad luck of bananas? Let us know in the comments below, we’re always happy to talk fish!