The Great Barrier Reef is, without question, the world’s premier big game fishing destination. It also happens to be a locale of dazzling beauty. This unique stretch of ocean provides a perfect battleground for Black Marlin fishing. With Cairns as its central hub, the area boasts a number of world-class fishing charters providing thrilling encounters with some of the biggest Black Marlin ever seen. Today, you’ll learn all you need to know in order to land the fish of a lifetime! 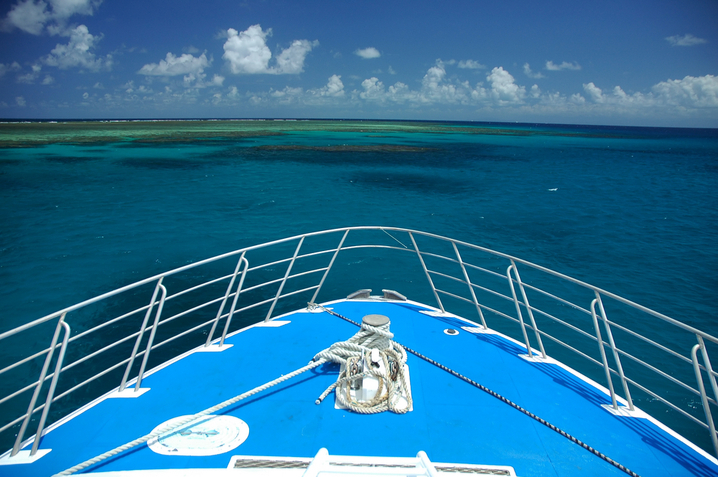 Every year, thousands of anglers flock to The Great Barrier Reef to try to catch a Black Marlin. And no wonder. Often referred to as the “Marlin Mecca,” you have a better chance of catching a “grander” (a 1,000+ lb Marlin) near the Reef than anywhere else on the planet. Seriously, casting a line here is like a giant lucky dip.

That being said, catching a Black Marlin is no easy task. These fish will put up a fight and make you work for it. But oh, is the fight something. There is nothing as awe-inspiring as seeing this giant Billfish leap out of the water once it’s hooked.

Before we get into the nitty-gritty of Black Marlin fishing, we really need to mention the paradise that is The Great Barrier Reef. The Reef is larger than the Great Wall of China and is the only living thing visible from space. One of the seven wonders of the natural world, this is the planet’s largest coral reef, boasting a wealth of diverse marine life, with hundreds of picturesque tropical islands. 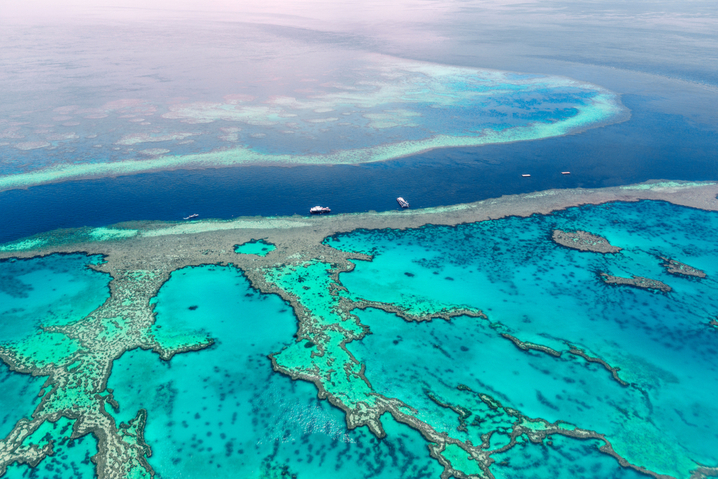 The place that provides the best variety in this area is Cairns. Considered to be the gateway to the Reef, this bustling town provides you with so many possibilities that it’s tough to soak them all in at once. Whether it’s exploring astonishing beaches, snorkeling, hopping on a skyrail through the rainforest, or going with a more urban approach, your endorphin overdose is guaranteed. Last but not least, Cairns is home to some of the best fishing charter operators in the world. 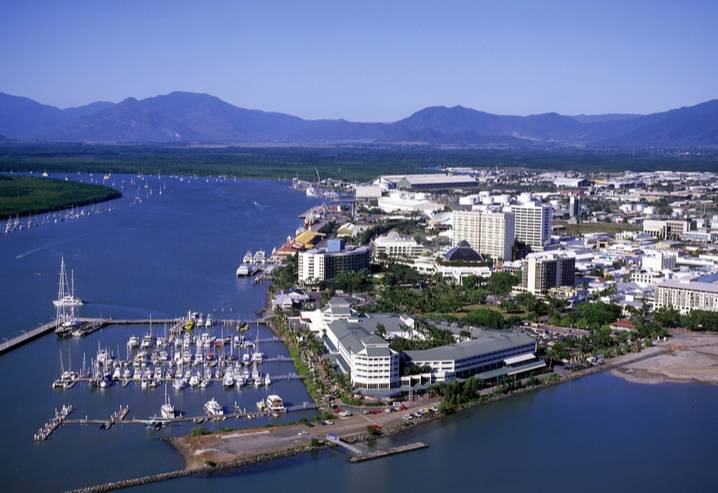 Fishing is so rich and diverse in this area, you really can’t go wrong. The Great Barrier Reef is home to an astounding 1,500 species of fish. You will likely experience more species here than anywhere else.

The charter boat possibilities are varied as well, featuring everything from the affordable workhorse to the ultimate luxury fishing vessel. One thing you can be certain of, the skippers in this area are experienced. With waters teeming with fish of all shapes and sizes, the average skipper in this area probably sees as many fights in a season as other captains see in three.

When and Where to Find Black Marlin

In 1966, American Richard C. Obach caught a grander in these waters – a 1,064 lb Black Marlin on an 80 lb test line. Ever since that moment, this area has been synonymous with epic Black Marlin fishing. Each year, 1,000+ lb Marlins are caught near the Reef, and thousands of anglers flock to the Marlin Mecca in hopes of being the next to land such a catch. Most quests for the famed Billfish start off from the area between Cairns and Lizard Island. The region is unquestionably the best place in the world to catch “the fish of a lifetime.”

To catch a Black Marlin, you’ll first need to know where to find them. The annual spawning cycle of adult Marlin in North Queensland produces a massive tide of baby Black Marlin. These fish grow at a rapid pace, and can reach 18 lb in just eight months. By early spring, the East Australian Current drives these small Marlins south, where they can feast on the abundant Sardines and Mackerel. While they’re young, they like to move in very close to the shore, so you can expect some great inshore fishing.

But if you’re like most people, you’ll want to have a go at the bigger ones. The further offshore you go, the bigger they get. Still, Black Marlin like warm waters, usually in the 24–27 °C range (75.2–80.6 °F). The presence of birds and species like Mahi Mahi, Mackerel, or Skipjack Tuna are all indicators that this Billfish is near.

Black Marlin fishing season runs from late September to mid-December. As for timing, you’d best be on the hunt around the full moon and the week after. Species that Black Marlin like to feed on move to the water surface at this time, which makes it easier for you to locate the Billfish. Once you find them, it’s game on. As we’ve mentioned, these beasts can put up a fight and give you a run for your money. Sometimes, fighting a Black Marlin can take up to three hours. 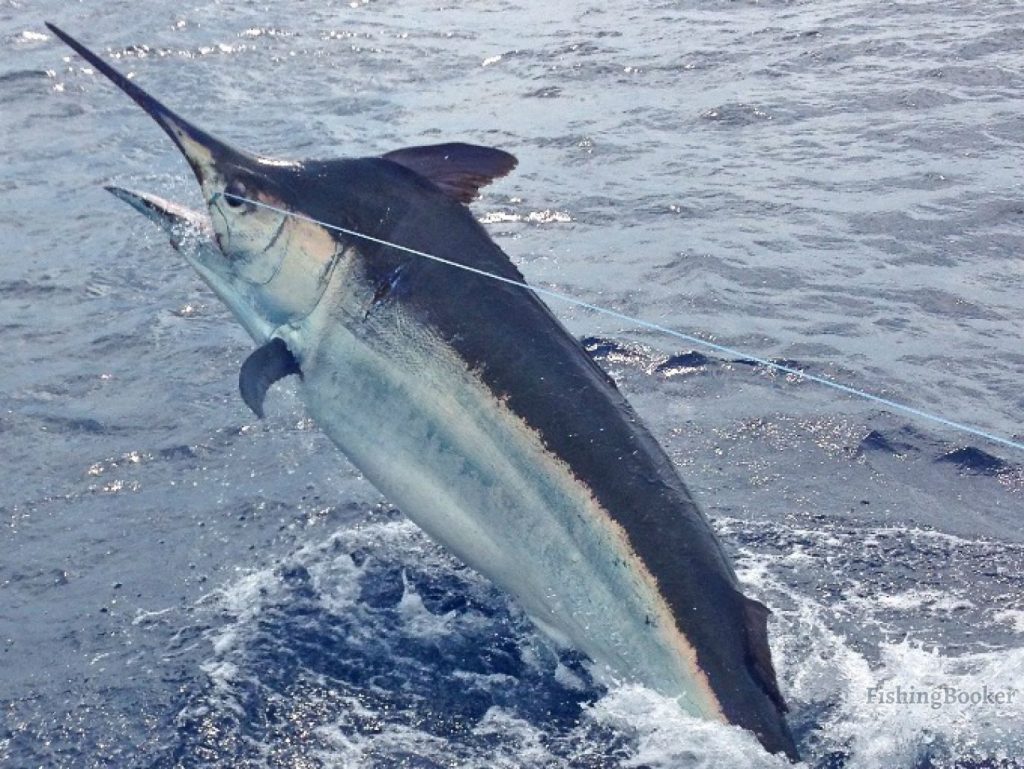 So, how do you catch a Black Marlin? Here are four proven methods for catching them:

Using lures for catching Black Marlin in nearshore waters is simple and fun and the bites are usually great. The good thing about lure trolling is that you cover a lot of ground in a day, and it’s super easy to do. Also, it’s a good method to catch tasty bycatch such as Mahi Mahi and Wahoo. The disadvantage to lure trolling is that it has the poorest hook-up rate of any method. It’s really tough to penetrate the bony jaws of a Black Marlin.

This method is just a little more complex, but it can pay off big time. What you do is set up your trolling gear: hookless lures with belly strips of Tuna or Mahi Mahi sewn onto them and a good teaser (preferably lime green). When the Marlin gears up to take the lure, that’s when the fun starts. As you see the Marlin take the lure, you should cast your live bait. For bait, we recommend skipjack tuna or Mahi Mahi, but Mackerel or Garfish would do as well.

Not a lot of things can compare to the sight of a Black Marlin jumping right at your cast. From then on, it’s you against the fish. One thing to look out for with this method is having smaller species like Wahoo chew through your lures. A mate is crucial in these situations because they can keep an eye on the lures and the teaser.

A traditional Queensland fishing technique, dead bait trolling is one of the best ways to catch smaller Black Marlin. The setup is a combination of garfish and carefully rigged split tail mullet, which are trolled at a speed of around 5 knots. This one requires a lot of precision and skill to set up, as well as some preparation time, so getting a good captain is very important here. That said, this method is very effective and has proven to produce a high rate of strikes to hook-ups.

Live baiting is proven to be very effective. In contrast to the previous methods, it can be a little less exciting, at least until the bite is on. You would be using this method when the Black Marlin are a little deeper in the water. What you should do first is locate a school of bait fish. Sometimes, when larger schools of Mackerel are in place, it’s not uncommon to see more than a few Black Marlin nearby.

We recommend at least an eight hour trip when going for Black Marlin. For a more immersive experience, you can go with a liveaboard option, spend a few days on the water, and truly get to know big game fishing at its best. 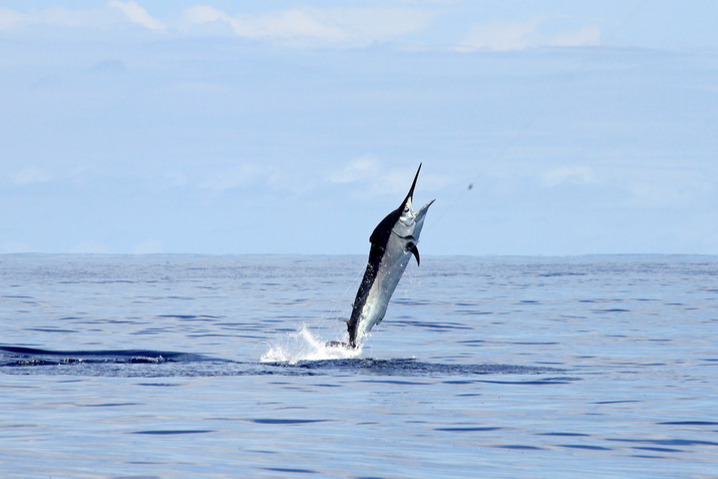 Black Marlin is one of the most difficult species to catch, and is surely not for the faint of heart. However, anglers who’ve seen what Marlin fishing is know that there is nothing quite like it. In the end, you’re the one who ends up being hooked! For big game enthusiasts, catching a Black Marlin is a bucket list must. And where better to do this than the tropical paradise that is The Great Barrier Reef?

What are your thoughts? Have you ever gone Black Marlin fishing? What would you recommend to a first timer? Let us know in the comments below.