Lionfish Invasion: 7 Easy Ways You Can Help Save Our Reefs

The Lionfish invasion has already been dubbed the worst environmental disaster the Atlantic will probably ever face. In less than 30 years, the Lionfish has all but completely taken over the western coast of the Atlantic ocean, decimating native fish population and wreaking all kinds of havoc to our reefs.

The flamboyant fish has no natural predators in the Atlantic, but what it does have is an appetite so insatiable it often leads to obesity and liver damage, paired with the ability to spawn tens of thousands of eggs every few days. Oh, and they’re also totally venomous. 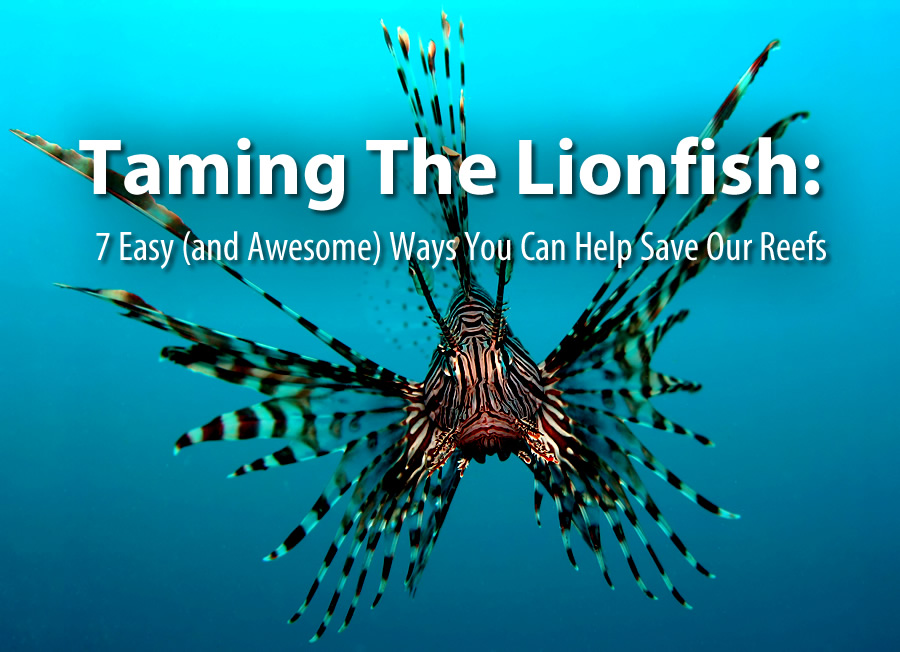 In this article, we’ll take a look at how Lionfish managed to become such a big problem. You can also pick up some real-world tips on how to beat back the Lionfish invasion.

An Appetite for Destruction

Just in case you thought the image of an overweight psychedelic fish doesn’t adequately convey the urgency of the situation at hand, here are a few terrifying figures for you to consider.

On average, a Lionfish will eat about 60,000 reef fish by the time it turns two. They reach sexual maturity around their first birthday, at which time they begin producing somewhere between 30 and 40 thousand eggs every four days. They are the perfect invasive species.

Unsurprisingly, this has led to their numbers exploding wherever they make their home. In recent years, they have taken over reefs all around the Gulf of Mexico and the Caribbean, as have spread up the Atlantic Coast as far north as Long Island.

Lionfish aren’t really what you would call a picky eater – well, unless by “picky” you mean they’ll eat pretty much any fish they can fit in their gigantic mouth, up to half their body size. Without any known natural predators, they can wipe out up to 90% of a reef.

But hey, here’s where the part with all the good news comes in, right?

Actually, not so much.

Scientists say we’re unlikely to ever completely get rid of these pesky invaders. The best we can hope for is controlling its population as much as we can. And that’s where you come in.

What do you do when a species threatens to kill your reefs by eating as much fish as they physically can? You fight fire with fire. 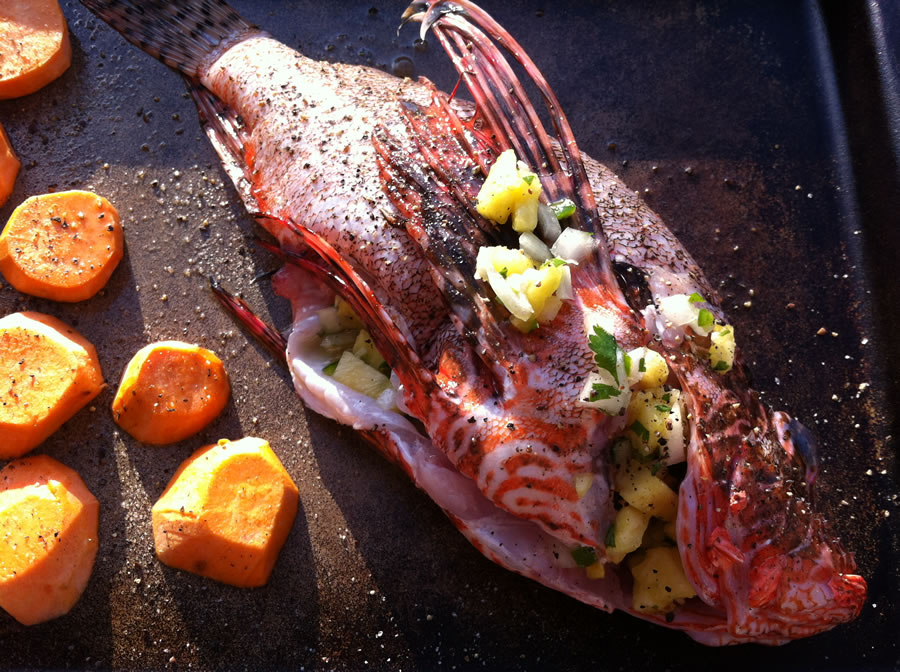 Several restaurants are leading the way in trying to entice seafood lovers everywhere to consider Lionfish as their new favorite meal. The fish tastes just like Snapper and Grouper, which are exactly the species we are at risk of permanently losing if we keep ignoring the warning signs.

Besides, how many lunches can you name that come served with “feeling like a marine conservationist” on the side?

There are still a few reasons to be cautious when preparing and eating Lionfish. Although the flesh itself has no poison, its spines are in fact venomous. Carefully removing the spines and cooking the fish should do the trick.

Check out this guide to master the basics of preparing one yourself, or just stroll down to your local restaurant and convince the management there’s a demand here that they could fill! Here are some of the places proudly serving Lionfish already.

The FDA recently voiced its concerns about some of the tested Lionfish containing elevated levels of ciguatoxin, a potentially dangerous neurotoxin. The toxin is not endemic to the species and can be found in various reef fish. So far, few cases, if any, have substantiated these claims by the FDA. Hundreds of Lionfish are eaten at derbys and tournaments each year, and there are still no instances of ciguatera poisoning reported. 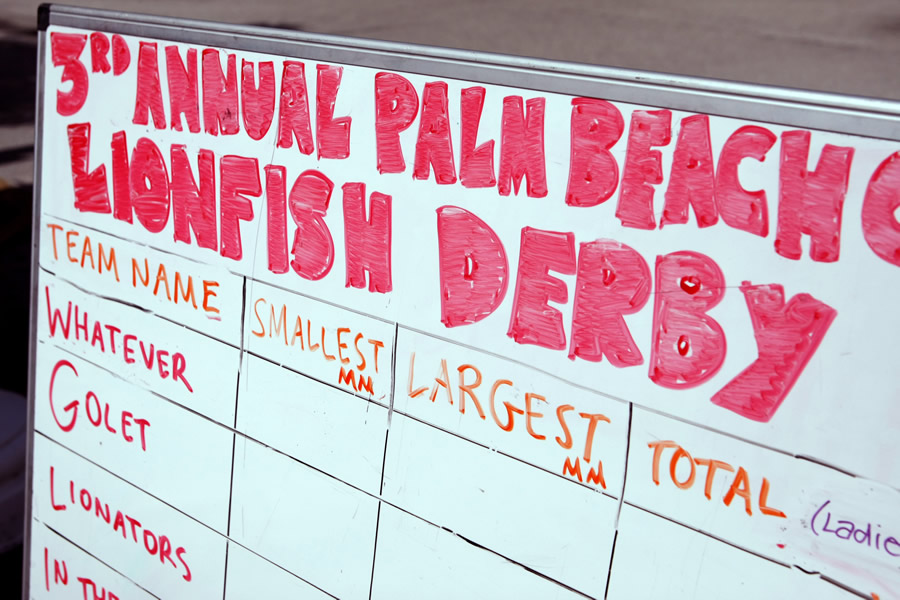 “Local control efforts such as Lionfish derbies have shown to be an effective means of Lionfish control”, says the Florida Fish and Wildlife Conservation Commission. In fact, not only are there no closed seasons for Lionfish, the lawmakers are actively loosening regulations in order to encourage passionate divers and spear fishermen alike to join in on the all-you-can-kill buffet.

There are dozens of Lionfish derbies and tournaments organized all over the US each year, and they’re always looking for new applicants. Catch fish, make friends, and compete for the grand prize! The main goal behind these events is to raise awareness and promote Lionfish hunting as the next classic water-based activity, just like fishing or snorkeling. And why shouldn’t it be?

In any case, if spearfishing is your thing, this is your time to shine. Many niche products have flooded the market recently, specifically designed for hunting Lionfish. No one had heard of the Zookeeper a few years ago; now, they’re the go-to accessory for any serious invader hunter. Whatever your weapon of choice may be, now’s the time to get out there and use it.

In order to mobilize its efforts effectively, the FWC needs to know where the Lionfish are spreading, at what pace, and how many of them you guys are neutralizing with your awesome new spearfishing gear. That’s why it launched a new Report Florida Lionfish App, which allows divers and fisherman to share their info about relevant Lionfish sightings and personal invader killing sprees. The app also lets you take photos of your catch, which will likely be used in the future for raising awareness about the issue on social media.

The FWC will use this data to choose which sites should be given priority when it comes to Lionfish removal. All data collected will be publicly available, basically acting as socially powered, impromptu hit lists for your next ocean journey. If you’re more old school but still want to help, you can also do so by reporting Lionfish sightings at MyFWC.com/fishing.

The main reason behind the Lionfish invasion’s massive success is the fact that the fish has no natural predators in the Atlantic ocean, and we have yet to fully understand what keeps them in balance with the rest of marine life in its native Indo-Pacific.

That is why some divers and marine enthusiasts have taken it upon themselves to try and create at least an artificial predator for the species, by training Sharks, Groupers and Moray Eels to eat Lionfish on sight.

Although it’s certainly been tried with the best of intentions, and although it looks freaking amazing on video, it has so far done much more harm than good to the eradication efforts.

The reasoning is simple enough – make a certain species eat a Lionfish once or twice, and they’ll incorporate it into its everyday dietary habits, right?

Well, since these beastmaster sessions first started, there have been numerous cases of increased hostility from Groupers, Sharks and even notoriously shy Moray Eels toward divers.

Because they’ve been conditioned to take fish off of a pole spear, and are now beginning to associate divers with food, leading to encounters like the one above.

In any case, there has so far been little evidence that any of this can help curb the Lionfish population.

Divers and spear fishermen, on the other hand, have been much more effective at handling the issue, and we don’t want to lose one of our most valuable resources by trying to play god with nature. Which brings me to my next point:

At least don’t do it carelessly. The intro was depressing enough already without adding to it one of the saddest parts of this entire ordeal – this is all entirely our fault. In fact, even worse than that – by most accounts, it’s entirely the fault of just a couple of irresponsible pet owners.

There’s still some speculation as to how the Lionfish made it to the Atlantic in the first place. However, the DNA evidence was able to trace all the Lionfish currently present back to only between 6 and 8 female Lionfish, which strongly supports the hypothesis that the species was first introduced to the Atlantic by pet owners who thought that the colorful fish should be free to live in its natural habitat.

Although that might be true, these people got the ‘natural habitat’ part terribly wrong, leading to one of the biggest environmental catastrophes of the 21st century.

This isn’t the only time an animal was introduced into a non-native environment in this manner, but it is by far the most destructive. In fact, due to its ornate beauty, they are still a pretty popular pet among aquarium fish lovers.

So a quick word of advice – if you’re planning on going all ‘Free Willy’ on your pet Lionfish some time in the future, please make sure to book a ticket to a nice place, preferrably somewhere in the middle of the Pacific Ocean. We’ve got enough troubles as it is.

If you’re allergic to seafood and prolific spear fishing expeditions, there are still various ways you can help. There are plenty of organizations and university students’ research papers on the topic that could really use your help.

This issue has now outgrown the Lionfish themselves, so volunteering in, or donating to any of the numerous organizations struggling to restore and protect the endangered reef ecosystems is money well spent. Organizations like this one, or this one.

7. Spread the Word by Sharing 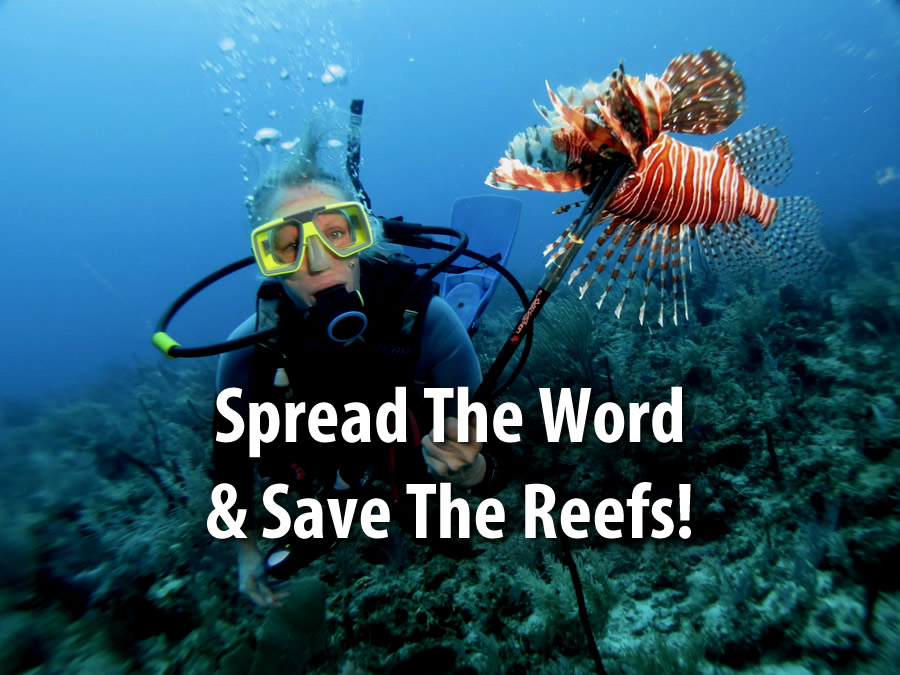 The Lionfish invasion has certainly garnered increased media attention in the last few years, yet many still lack elementary knowledge on the issue, and all the various ways that they can help keep the problem under control.

So become an ambassador in your community. Talk to your local restaurant about possibly serving Lionfish. Organize a derby. Share this article. Whatever you do, just remember that we’re the ones who started this, and we are the only ones that can fix it. So please, act now.