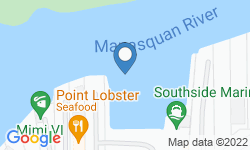 Are you itching to test your angling skills against some real, fighting prey? Jersey Nutz Sportfishing will put you on some of the hottest offshore bites in the Northeastern US – it’s up to you to wrestle those big boys on board.

Join Captain Cody Melton on board his imposing 45’ Custom Carolina offshore sport fisherman. She’s a big vessel, easily able to hold 6 anglers fishing at the same time without tangling lines. She’s not sluggish either, powered by twin Volvo engines with 450 HP each – you can cruise at a top speed of 25 knots. Your safety is paramount to the captain and the boat follows all the USCG standards.

She’s got all the comforts needed to give you a quick recharge between epic fights, especially on longer trips. You can freshen up in the onboard freshwater shower, or the full-head bathroom. For overnight trips, there are comfortable beds, as well as a kitchen and an air-conditioned cabin. Everything is set up so you can focus on the fish and not worry about anything else.

Speaking of focusing on the fish, a flybridge will help you spot your topwater prey from further away. When trolling for the likes of Marlin, Tuna, or Mahi Mahi, outriggers will extend your reach, while downriggers allow you to target deeper-dwelling species. Fishing with live bait is also made easier by the onboard live bait tank – it’ll keep your baitfish appetizing long after it’s caught.

Capt. Cody will take you after a very wide range of species. Ranging from Fluke, Seabass, over to the tasty Tilefish, with a sprinkle of predatory Sharks. The big prestigious beasts are the stars of the show, so you can target Swordfish, Bluefin and Yellowfin Tuna, Blue and White Marlin, and many others you may run into.

Ready to feel the rush of adrenaline as you scramble to fight a massive Bluefin that just took your bait? If so, you’re ready to book a trip with Jersey Nutz Sportfishing and cast off on an unforgettable fishing adventure!

Jersey Nutz Sportfishing
Point Pleasant Beach, New Jersey, United States
Captain Cody Melton has spent the majority of his life fishing and working on the water. He earned his captain's license at the age of 21, and refused to stop guiding customers on amazing fishing trips every since. He's fished in some of the biggest tournaments on the East Coast. He's also a New Jersey Heavy Weight state wrestling champion, so you know he can reel that big boy on board!

Custom Carolina (Offshore sport fishing) originally built in 1998, and restored in 2020. Powered by 2 450HP Volvo engines, with a maximum cruising speed of 25 knots.

PayPal
When paying the remaining balance with a credit card, an additional 3% charge will apply.