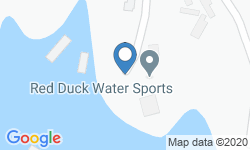 Whether a seasoned fisherman or just keen to see what the fuss is about, Elite Striper Guide Service of Texas has you covered. Get out on the rich waters of Lake Texoma and get your fish on. Full to the brim with Striped Bass, you’ll have the chance to go after one of the nation’s favorite freshwater game fish with a seasoned captain.

Captain Randy Jackson has been fishing all his life, running charters since 2014. An avid angler, he wants to share his passion with each and every customer and prides himself on nothing more than putting a smile on his guests’ faces. He’ll even clean and prepare your catch at the end of the trip for you to take home!

Explore these productive waters aboard a 23’ Falcon Striper Deluxe center console. With space for up to 6 guests, you’ll have the whole 360-degrees of the boat to fish at the same time, battling out with each other over who makes the biggest catch. Powered by a 350 HP GM engine, you’ll speed away from the dock, getting on the fish in no time to start casting away.

The huge lake is home to numerous fishing grounds and you’ll have the chance to vary your fishing techniques. Troll behind you as you speed off, or jig while you drift to entice the bite of exciting and delicious Striped Bass. Known to put up an intense fight, Stripers won’t only be a tasty treat at the end of the day, but they’ll also provide a fun-filled fishing experience.

A family man himself, Capt. Randy welcomes children of all ages aboard. Bring the whole family and get them hooked on Bass fishing. All you’ll need to do is to bring some snacks and drinks aboard and settle in for a thrilling day with Elite Striper Guide Service of Texas.  A true Texan trip awaits.

Randy Jackson
Pottsboro, Texas, United States
A husband and a father of one, Capt. Randy is a family man with a passion for fishing that drives him to try to be the best. He's been fishing all his life and takes pride in putting a smile on people's faces. Running charters since 2014, he enjoys all types of fishing but admits that he's a Bass fisherman at heart. His biggest catch is a 20 lb Striper, and is looking to match that catch on each and every charter. 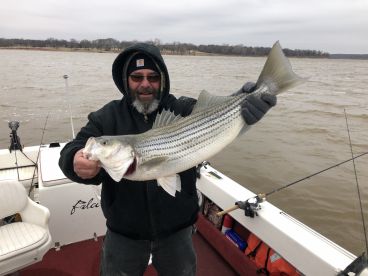 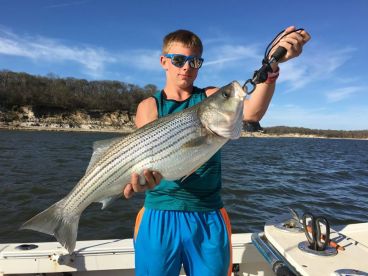 27 reviews
Pottsboro  • 28 ft  • 8 persons
Almost there...
/
Settings
Finding the best local fishing charters for you...
3 people are looking at this charter.
Charter added to wishlist
Charter removed from wishlist