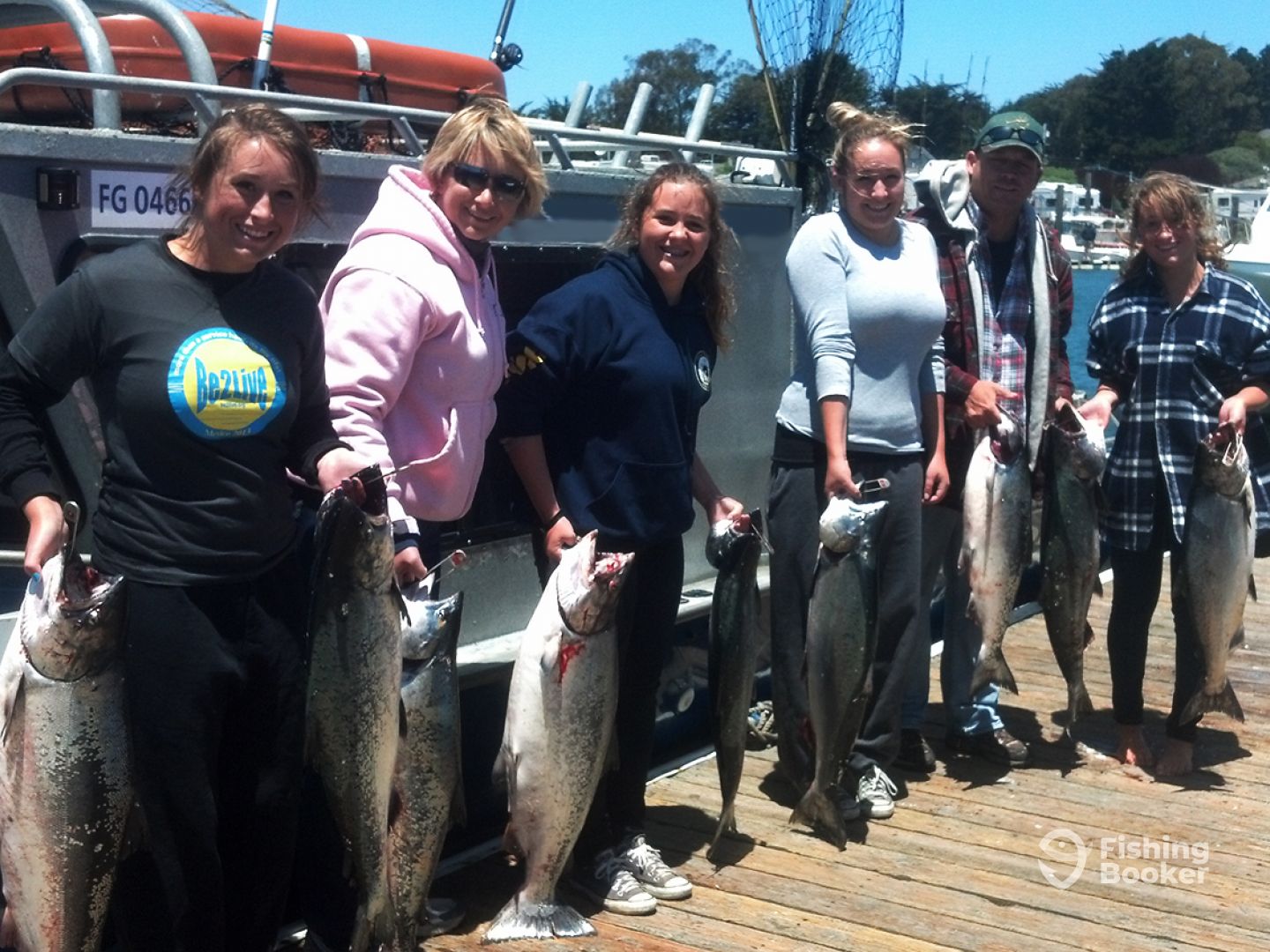 Step aboard a 28’ Design Concepts boat, built in 2004 and powered by a 225 HP Honda engine. This vessel is equipped with GPS and a fishfinder, leading you straight to the good stuff! She’s got enough room for up to 6 anglers, so be sure to bring along some friends for the ride. 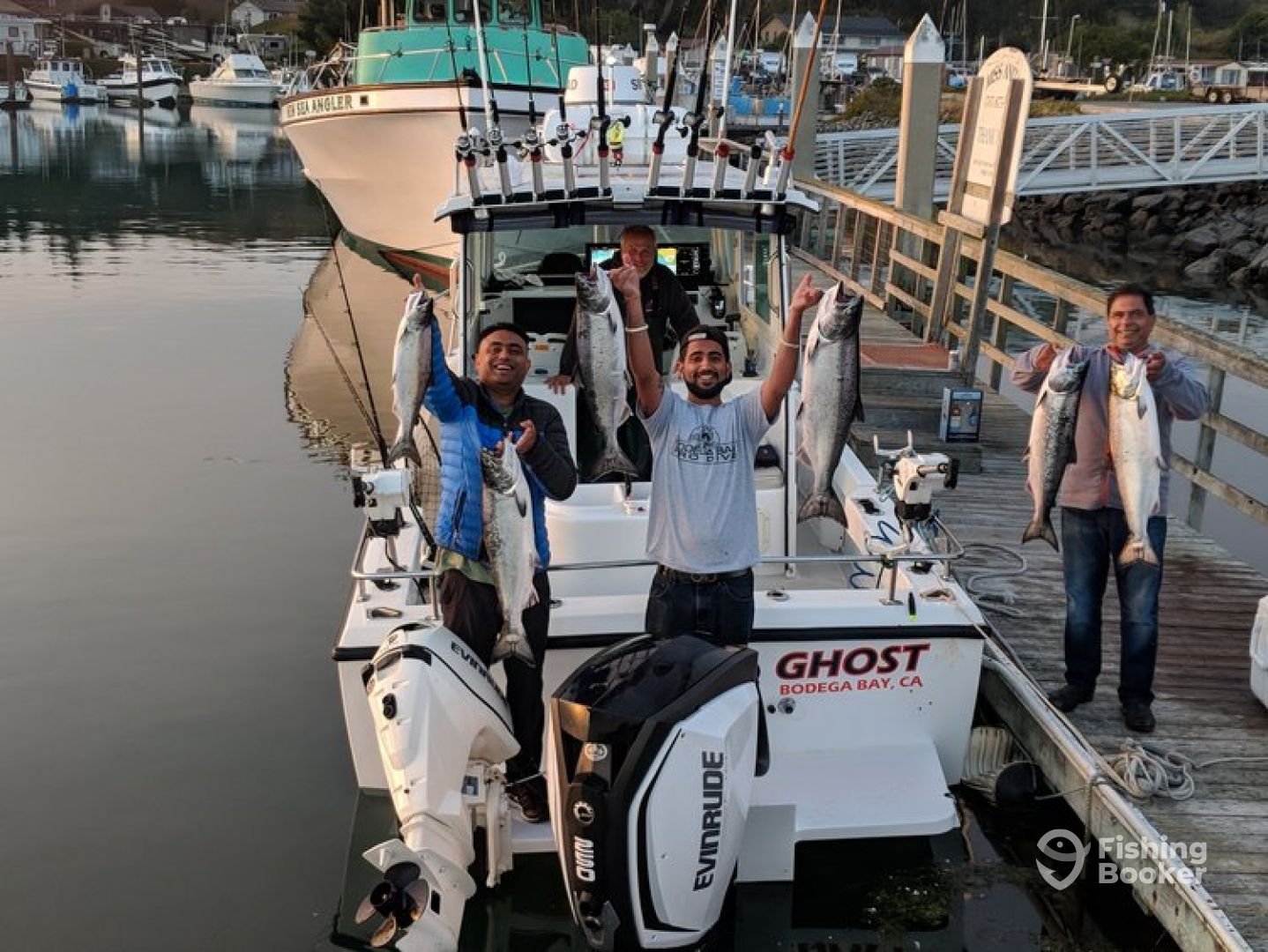 Your boat for the day is the “Ghost,” a 23’ Farallon center console that’s recently been fully restocked and refitted. Running on a single 250 HP E-Tec Evinrude engine, she’ll get you to the fishing grounds before you know it. She’s also outfitted with top-of-the-line Simrad navigation electronics to ensure you’re locked on the fish at all times.

Bodega Bay Salmon fishing didn’t earn its reputation without good reason. From spring through fall, you can find King (Chinook) Salmon almost everywhere in and around the Bay. This annual migration draws anglers from far and wide to the shores of Bodega Bay, eager to earn bragging rights to this impressive catch. Delicious and capable of putting up a tremendous fight when hooked, Salmon really are king when it comes to sport fishing on the west coast.

When and Where to Fish for Salmon

King Salmon start showing up off the coast of northern California in April and May. At the start of the season, anglers catch specimens weighing around 10 lbs. You can experience the very best of Salmon fishing in July, when it’s possible to reel in fish after fish, many of them weighing up to 20 lbs. By the end of August, most Salmon have made their way up into the rivers to spawn. The season for ocean Salmon fishing usually closes in November.

Some of the most productive local fishing grounds are found in Bodega and Tomales Bays, as well as various offshore locations. Charter boats target Salmon off the coast of Point Reyes Beach and near Whistle Buoy, about 2 miles out from Bodega Head.

You’ll see anglers trolling for Salmon all along the west coast, and Bodega Bay is no exception. Few methods are as tried and true as this one. Anchovies are usually the bait of choice, since ocean Salmon in California already gorge themselves on this baitfish. It’s common to troll with a flasher or an Apex.

A Salmon fishing technique even more specific to the west coast is “mooching.” Anglers from California to British Columbia rely on this method, albeit with slight variations everywhere you go. In many places, mooching is similar to drift fishing. Unlike trolling, this method is hands-on, meaning anglers hold the rods the entire time and keep the bait in motion by reeling it up and letting it sink repeatedly. Many prefer this method because you can feel the Salmon striking the bait.

Salmon (Chinook) fishing in Bodega Bay is highly variable throughout the year. High season is June to August. Closed season is January to March and November to December.
Bodega Bay
4.36
Based on 22,153 reviews by FishingBooker anglers