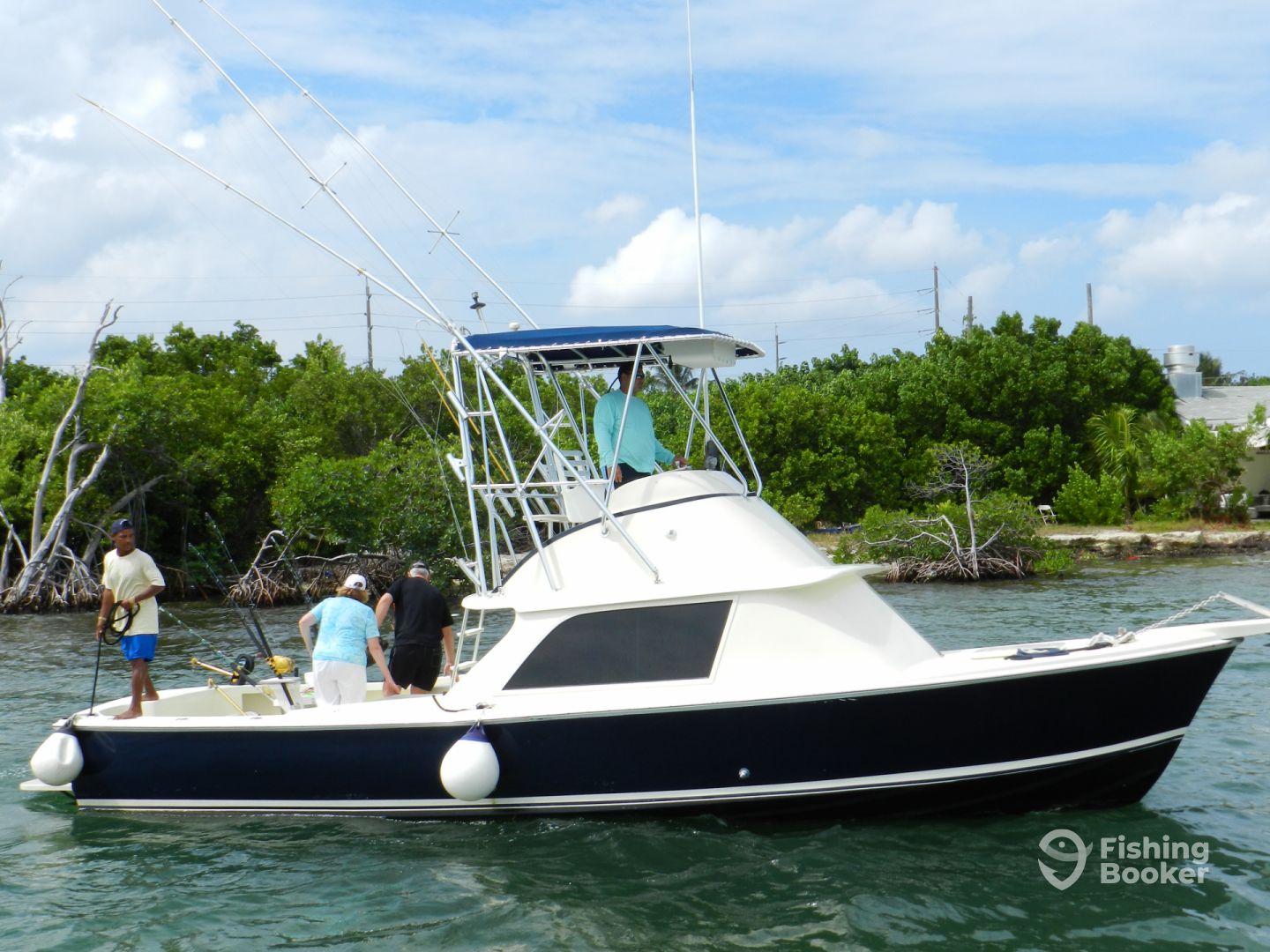 On your day out, you will be able to try your hand at deep sea fishing and reef fishing, targeting anything from Bonefish and Tarpon to Wahoo, Marlin, Tuna, Grouper, Mahi Mahi, Snapper, and Sharks. All the proper fishing equipment for anyone involved will be provided by the crew, along with snacks and lunch that are available upon request. 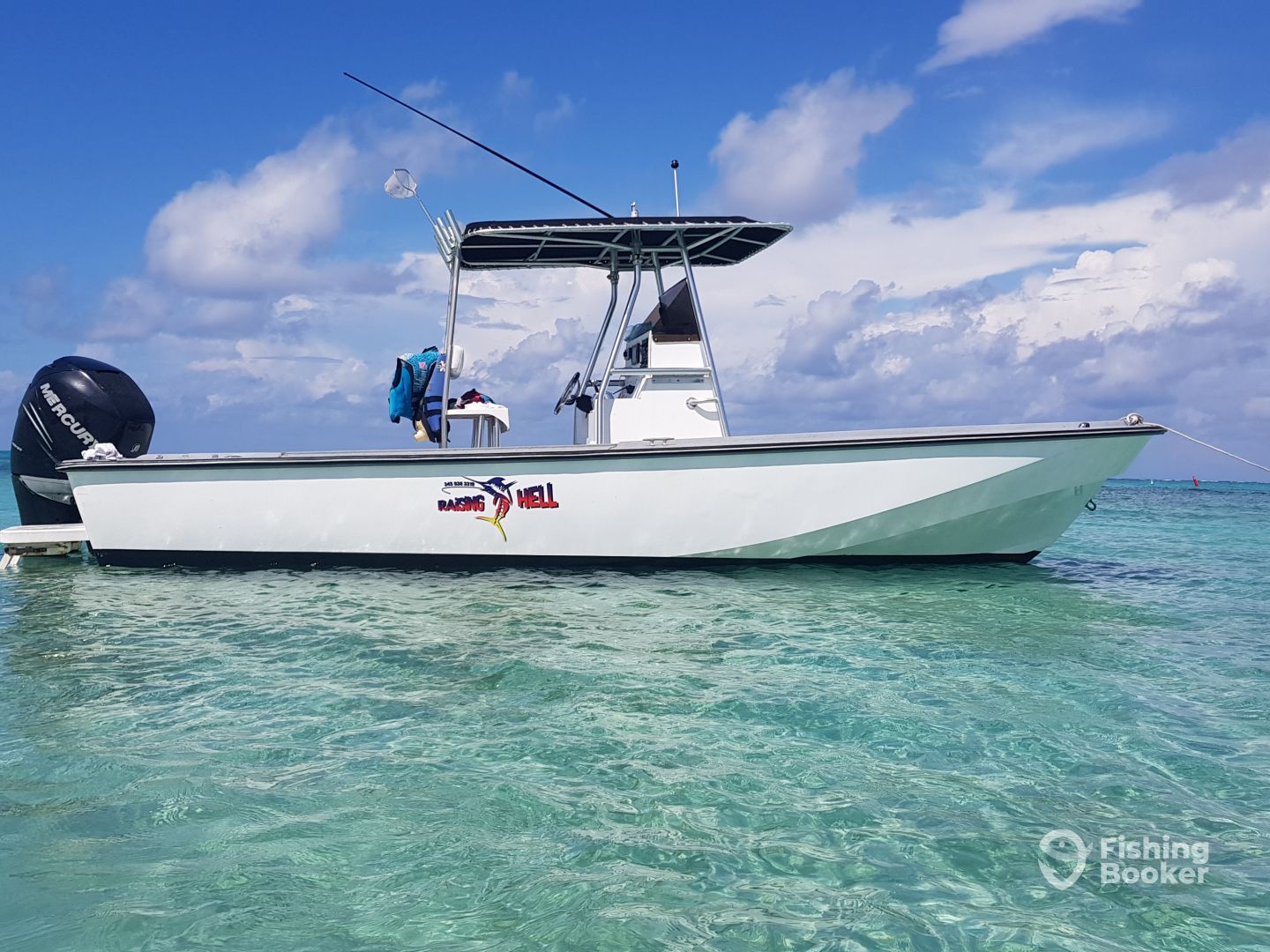 Go Wild Charters wants to share the passion and show you what fishing is all about. Going on a trip with this charter means you’ll join the team that knows what it takes to catch a fish. The crew is here to make your trip an unforgettable one. They can get you to Cayman fishing hotspots in comfort and ensure a great start of the day.

Anglers can enjoy some of the most exciting fishing in Grand Cayman without even boarding a boat. Various flats around the island are home to excellent inshore action throughout the year, and many guides will lead you into the thick of it on foot!

The grassy flats of Grand Cayman are home to many species that you can catch year round. The most sought-after fish in these waters are Bonefish, Tarpon, and Permit (the “grand slam”). This coveted trinity is always biting, though Permit is rarely caught these days due to overfishing. You are very likely to catch Bonefish in spring and summer. Tarpon are biting most in late summer, on the flats as well as in canals and backwaters.

The flats are also frequented by Barracuda, Pompano, Jacks, Snook, Mutton Snapper, and Triggerfish. In recent years, Snook have been spotted more often than before. Your chances of catching one in these waters are fair in summer and fall. You are highly likely to catch Barracuda and Jacks year round, with the possibility of landing a Triggerfish as well. You are most likely to catch Mutton Snapper in winter and spring.

You will find anglers in Grand Cayman fishing the flats by spinning with light tackle and fly fishing. Inshore fishing charters may include guided wade fishing or casting from a skiff. Some of the most popular destinations for flats fishing are Prospect Point, Frank Sound, North Coast, East End, West Bay, and Rum Point.

You can target Bonefish by casting a heavy bucktail jig tipped with shrimp, or by fly fishing. When fly fishing for Bonefish in Grand Cayman, you can use many of the same patterns as usual so long as they are lightly weighted. The greatest challenge is adapting to the thick grass covering the flats of Grand Cayman, which demands precise casts and slower stripping than average.

The Tarpon in Grand Cayman are privy to floating plugs and small, yellow bucktails. It’s best to target Tarpon early in the morning or at dusk. You can fly fish for Tarpon as well, with poppers or bass-bugs.

Like Bonefish, you will sometimes find Jacks feeding on the flats. You can target them using virtually any lure or fly. You can also catch these fish by blind-casting off the edges of flats, using flashy flies and a quick retrieval. You can occasionally find Triggerfish on the flats of Grand Cayman, as well. Stealth is necessary, as they spook easily in shallow water. Yarn crabs in #6 should do the trick. Small, heavy Crazy Charlies work well for Pompano. These fish like going after pink, in particular. While you are very unlikely to find a Permit, you are sure to entice one with a soaked piece of conch or crab bait when you do.

Snook are less predictable than Bonefish and Tarpon. They generally will not chase a lure as far, and they’re unlikely to get overly excited about a topwater lure or fly. Snapper are also tricky to target, but you might reel one in while fishing for Bonefish and other species. You can find them on the flats or the edges of flats, where slow-stripping a fly might prove effective. They will also go for crab bait or a soaked piece of conch.

Grand Cayman
4.22
Based on 20,063 reviews by FishingBooker anglers

Full Day with Real Esea
Gracie P. fished with ReelEsea Charters on February 10, 2020
We didn’t catch the fish we hoped to but it is called “fishing” not catching!!! Not the captain and crews fault, just reality!
2 hour trip
John C. fished with Stress Relief Charters – Dusky on December 8, 2019
Told the captain we had young kids, so catching a good amount of fish was the goal more than keepers. Mission accomplished, plus the boat ride was fun and fast.
July fishing trip
John M. fished with Stress Relief Charters – Dusky on July 31, 2019
I would make sure the boat has live bait.
Full day trip to the Caymen Bank
Lyles B. fished with ReelEsea Charters on July 24, 2019
Lots of options; deep drop, reef, or blue water. Grand Cayman is unique in that it has access to the deepest water in the Caribbiean. Try to hit the tuna bite earlier than July to give you the best options for a big catch.
Fishing with Daniel
Harry G. fished with Outcast Charters Cayman on July 2, 2019
Put a variety of bait and lures, see what they are hitting and work those.
Half Day Reef Fishing with Captain Stephen
Yvette M. fished with Reel Vibes Charters on June 14, 2019
Be patient but the captain will find the fish.
Most knowledgeable captain!
Stacy W. fished with Captain Asley’s Watersports on May 26, 2019
Put sunscreen on before you get in the boat and dont forget your legs. Water can get rough farther out so take the less drowsy dramamine.
Full day trip with Captain Nick on the GUNNER
Patrick P. fished with Get Bent Charters on May 23, 2019
Do arm workout the week proceeding...especially the fore arms