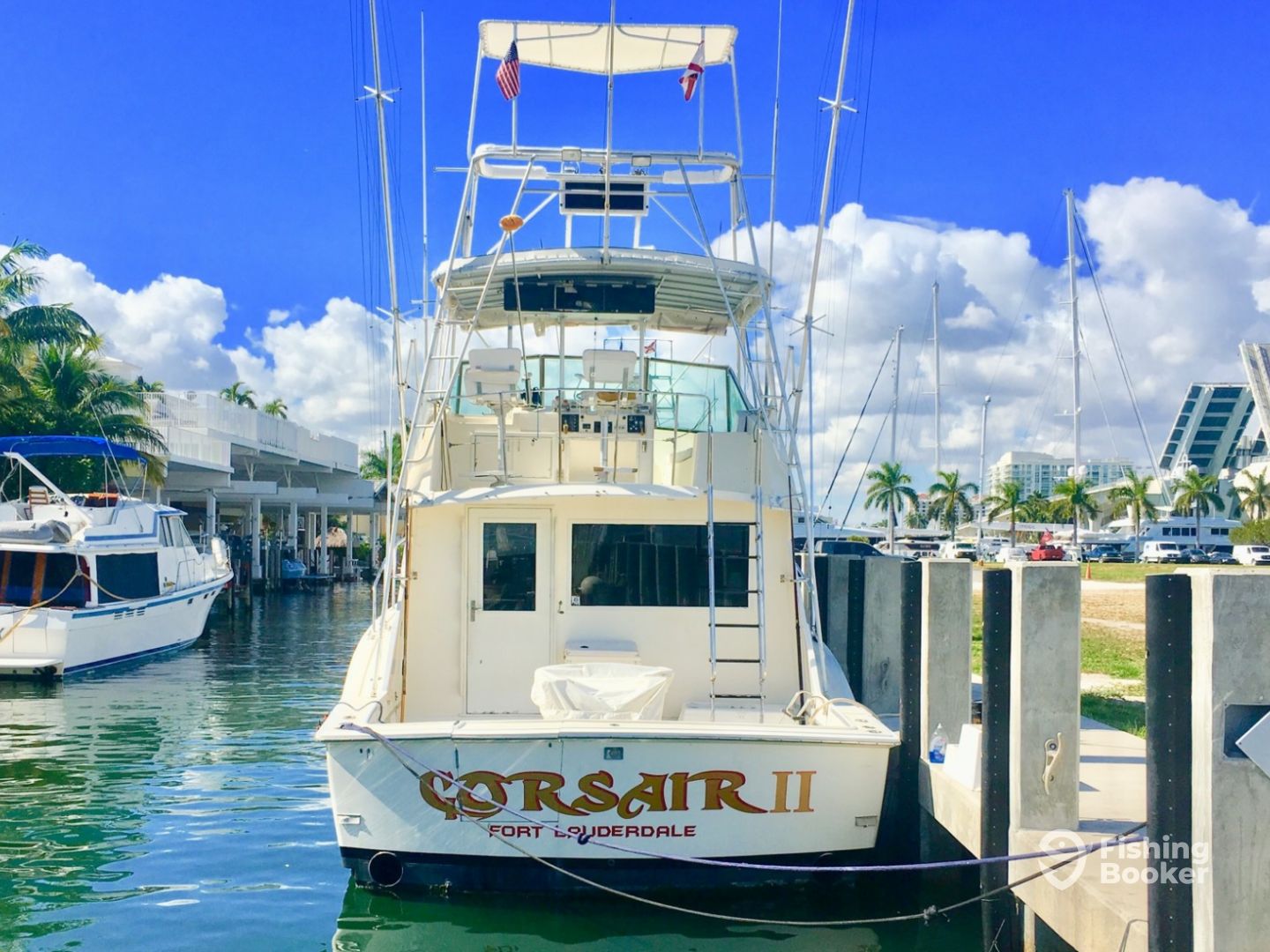 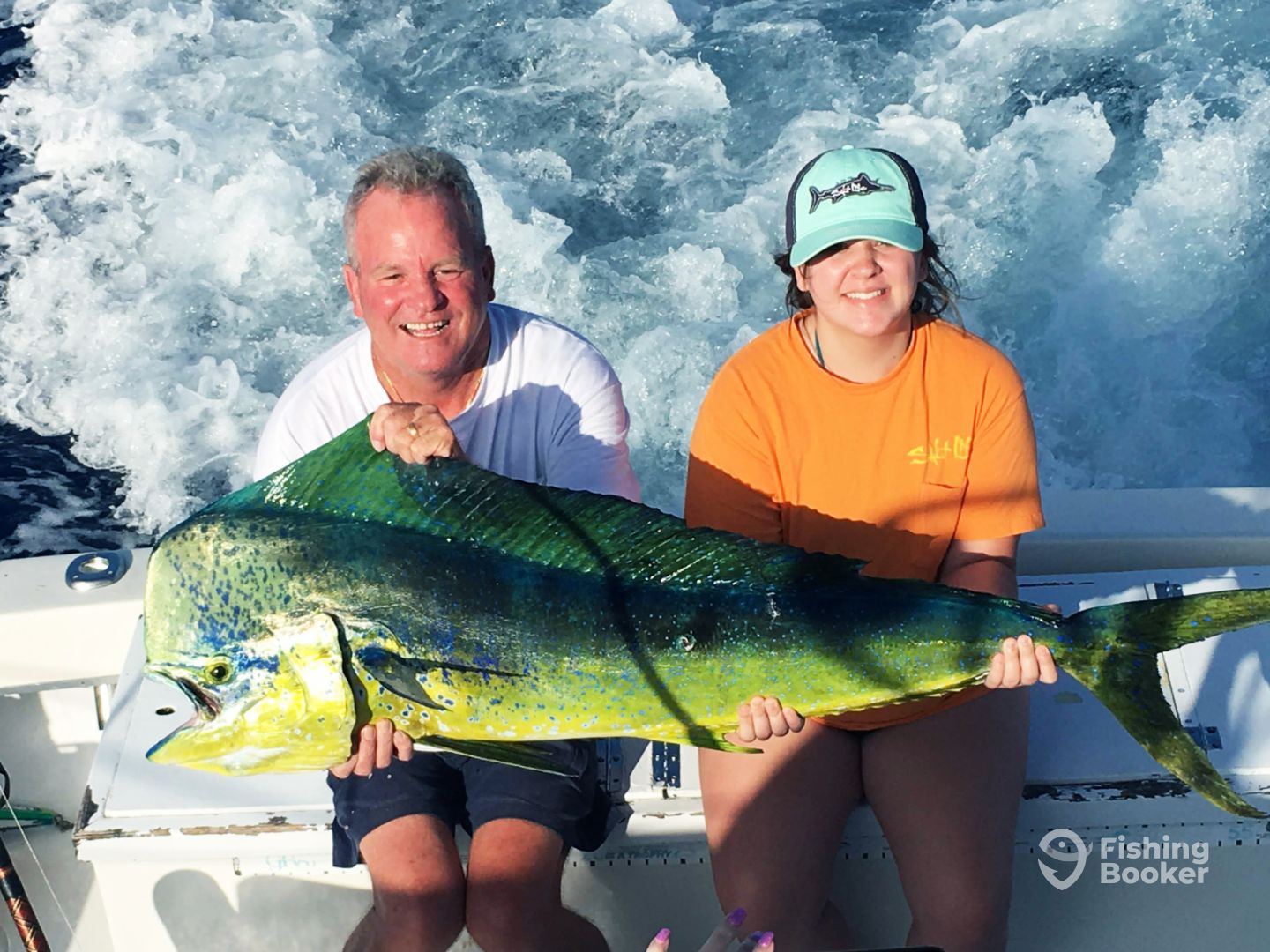 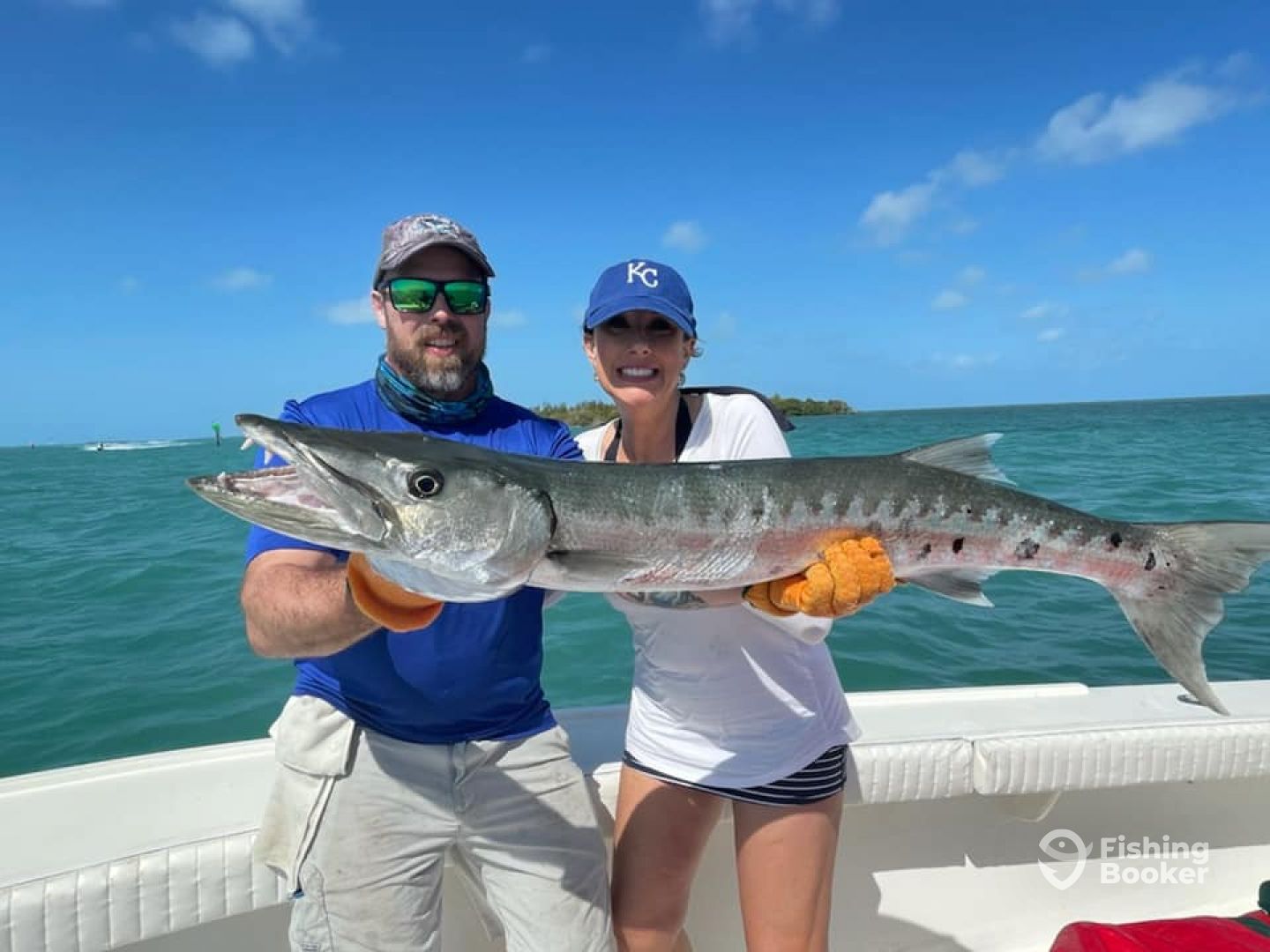 You’ll start your trip on a 30’ Dorado center console. The boat can easily accommodate 6 guests and is powered by a 260 HP Yanmar engine. It uses modern GPS, fishfinder, as well as radio technology for navigation and its fishing gear includes outriggers and downriggers. There is also a livewell to supply you with live bait. 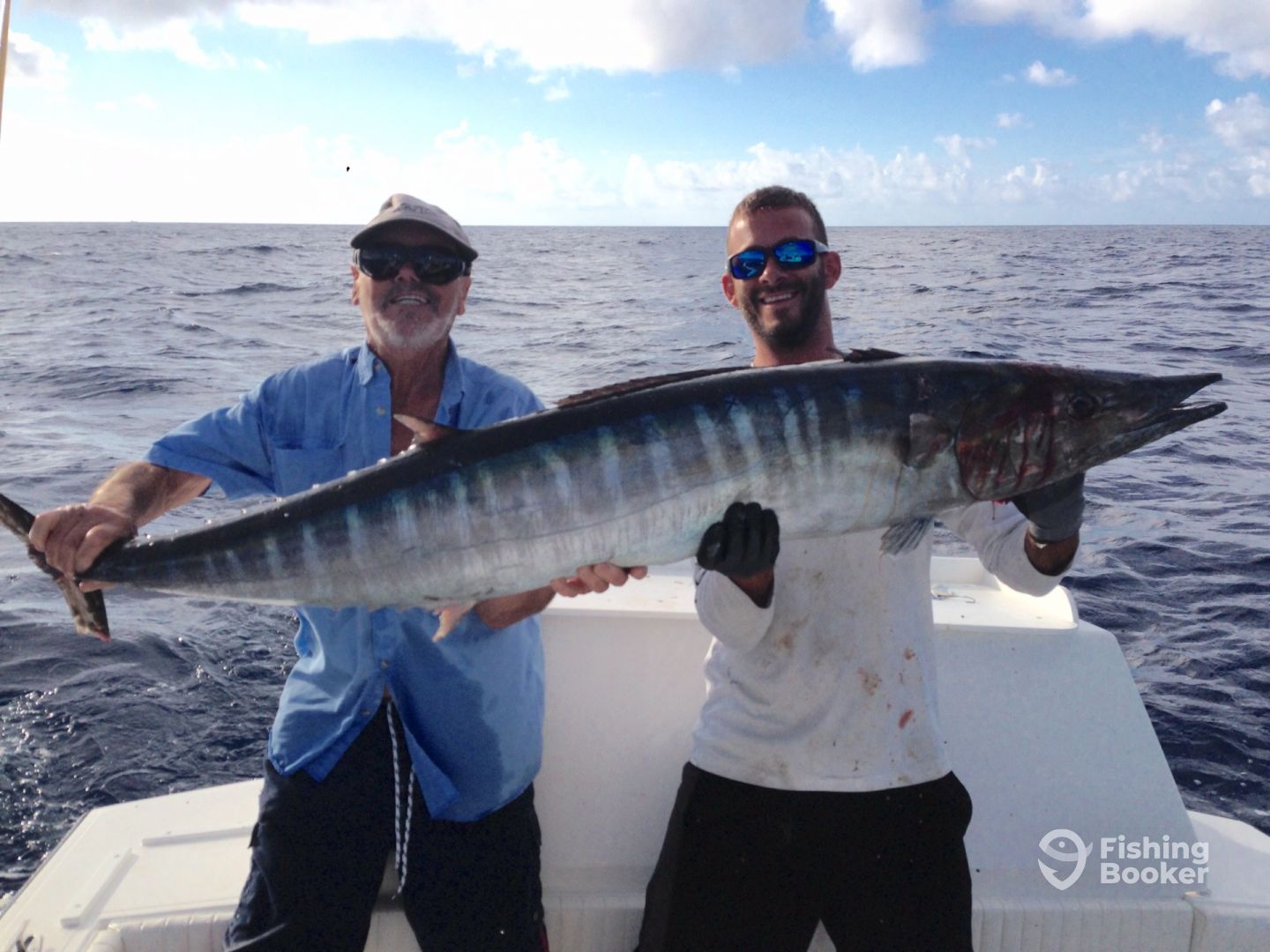 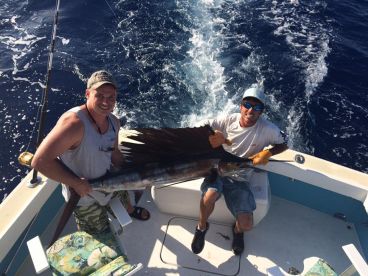 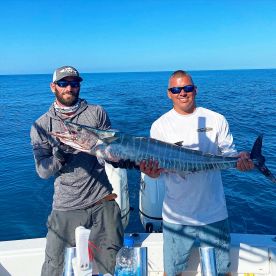 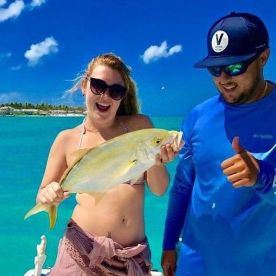 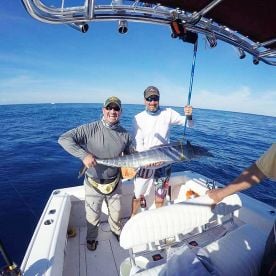 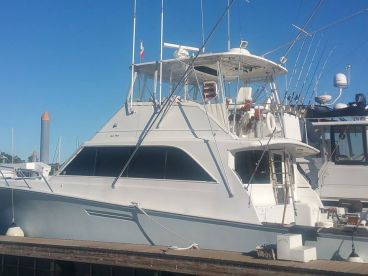 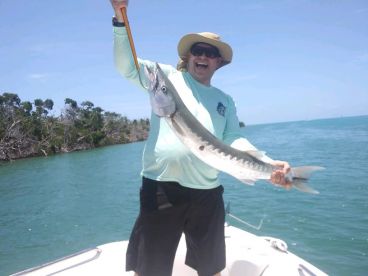 You don’t need to go far to try reef fishing in Key West. To the west, untouched patch reefs extend from a stone’s throw from the mainland out as far as the fabled Dry Tortugas. To the south and east, the outer reef (the only living barrier reef in continental United States) is a melting pot of baitfish and predators. Bottom fish and pelagics alike visit these waters throughout the year. Suffice to say, there’s never a dull moment on these waters.

When and how to fish the Key West reefs

Key West reef fishing charters operate all year round, although it’s in spring and fall when the fishing really heats up. Most of the time, they use light tackle spinning gear, which is easy for beginners to use at the same time as putting up a challenge for more experienced anglers. Pair this up with some heavy chumming, and you’ll have a fishing frenzy on your hands.

If one species sums up the reef fishing Key West is so proud of, it’s the Yellowtail Snapper. This cheerful chappy is probably the most common target on these charters and its bright coloring is a sure hit with the kids. Great on the table, these fish weight up to about 5 lbs. While they usually live around the reef, they swim up to the surface when you chum the water, allowing you to target them with small jigs, live and dead bait, and flies.

But it doesn’t stop there. Joining the Yellowtail is its much bigger cousin, the Mutton Snapper, which weighs up to 20 lbs. These are usually targeted by fishing dead bait on the bottom. Lane and Mangrove Snapper might also find their way onto the boat, as well as Grouper.

That’s all good for people who want to fill the ice box. But what about the adrenaline junkies? Well, the beauty of reef fishing in Key West is that the rich marine life in the corals attracts plenty of larger fish looking for an easy meal. Expect to come across King Mackerel (Kingfish), Barracuda, Sharks, Amberjack, Bonito, Cobia, and even the occasional Sailfish and Mahi Mahi. Yes, we told you there was plenty going on round here.

Sibling fishing trip
Roberto M. fished with Salty Goat Fishing Charters on April 8, 2021
Key west has the best fishing weather I love it ?
Spring break trip
Kyle H. fished with Good Times Key West on April 5, 2021
Just give it a try. Lovely way to see a different part of Key West.
Great time!
Frank W. fished with Boa Vida Charters on March 15, 2021
Prepare to have fun and enjoy the beauty of the sea.
Half Day Fishing on the Flats with Sean O'Keefe
Scott C. fished with Key West Backwater Fishing on February 5, 2021
Watch the weather. We had just gotten through a cold front, and, not unexpectedly, it took a little hunting to get on the fish. An experienced Captain is a must. Sean O'Keefe at Key West Backwater Fishing knows where to find the fish and how to catch them.
Full day with Hugh
Edward H. fished with Reel Easy Charters on February 4, 2021
Listen to the captain, he knows how to fish.
December fishing trip
Richard F. fished with Good Times Key West on December 13, 2020
We did a snorkel and sightseeing trip with this charter and they did the most amazing trip for us could not have asked for a better trip.
Fishing with Mike
Matt S. fished with Michael O’Brien Charters on August 11, 2020
Sometimes the fish aren't biting. There are no guarantees. Enjoy the view and the scenery and conversation if nothing else.
Evening half day trip with Ryan
Kate Z. fished with Good Times Key West on July 26, 2020
Sunscreen!!!! Also, have an idea of what type of fishing you’d like to do before booking and heading out, that way your captain can get you to the best spot!