Background
Captain Craig grew up on the Indian Rocks Pier and started fishing as a young boy. He learned the craft from the "old timers" by carefully listening to and following their advice. Capt.Craig at 15 years of age in 1982 went on to work on several commercial boats as a deckhand for swordfish, tuna then grouper as well as charter boats then getting his captains license in 1993. In 1997 became a full-time guide to teach people my craft .Capt.craig hold the IGFA world record for king mackerel on 6lb tippet fly division and has been and avid light tackle enthusiasts. Celebrating 20yrs as a full guide.
Techniques
Inshore and nearshore light tackle, fly fishing.

Background
Captain Craig grew up on the Indian Rocks Pier and started fishing as a young boy. He learned the craft from the "old timers" by carefully listening to and following their advice. Capt.Craig at 15 years of age in 1982 went on to work on several commercial boats as a deckhand for swordfish, tuna then grouper as well as charter boats then getting his captains license in 1993. In 1997 became a full-time guide to teach people my craft .Capt.craig hold the IGFA world record for king mackerel on 6lb tippet fly division and has been and avid light tackle enthusiasts. Celebrating 20yrs as a full guide.
Techniques
Inshore and nearshore light tackle, fly fishing. 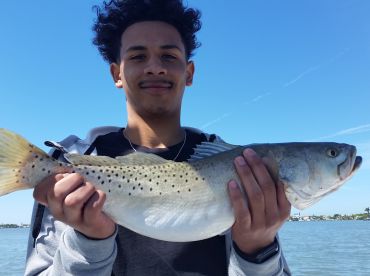 Thing are changing
Since the weather keeps fluctuating, fishing has been a challenge. Trout are still feeding, but the trend has been taking two days of east winds to gather these fish back into bunches. Most of the fish have been scattered, but are of good quality. We have been encountering fish ranging from 17 to 22 inches. It seems that the preferred depth has been 3 to 5 feet of grass flats with big pot holes in them. Drifting live shrimp underneath a popping cork, and/or Cajun Thunder has made a big difference. If you can get that second day with the east winds, the Trout will move up on the flats to deeper pot holes. Redfish are on the flats, but the tide and area has been crucial. Live shrimp and small pinfish cut ladyfish are working best these bruisers Sheephead have been spotty. Live shrimp, mud crabs, or fiddler crabs have worked well. High water in the mid morning or early afternoon has been the most successful. Hopefully the weather will break and get things back to normal, in order for you to enjoy a nice day out on the flats, from as the water has started to warm and moving into March we are getting plenty of scaled sardines chow mein on the flats which is a great sign spring is around the corner. Cobia should start showing up in the next couple weeks Clearwater to Tarpon Springs. And Indian rocks beach Thanks, capt craig 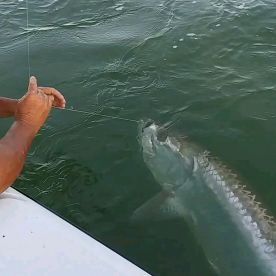 Tarpon and snook
It amazes me how the same Charters get booked over and over that are and their early 20s saying they have 20 years experience I don't think so but in another note.Starting the 20th through the 25th if you want a shot at Big tarpon and snook those five days will be the prime tides. This week hooked 13 tarpon and 7 boatwd as well as spending a couple hours in the Backwater did get a few big snook and even some redfish to try to pull off the West Coast slam don't miss out. Fish with a native that has the experience and backs it up at 53 years old 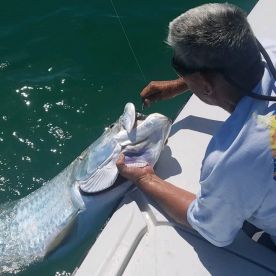 Tarpon, redfish and snook on fire
TARPON FISHING has been incredible so far in June with multiple hookups and clients experiencing what makes the silver King the ultimate game fish in the CLEARWATER BEACH AREA. SNOOK FISHING has been some of the best I've seen and the last few years on the CLEARWATER INSHORE BACKWATERS Lots of SNOOK in the 30 to 38in class. Redfish have been all over the CLEARWATER FLATS almost all spoil Islands, oyster bars and shorelines have been holding good numbers of over slot REDFISH so come enjoy some awesome fishing with CLEARWATER FISHING CHARTERS. Thanks CAPT CRAIG LAHR 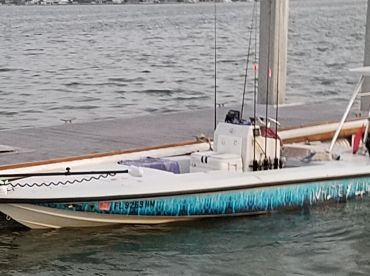 The only flats boat left
Skinny water charters is the last true flat Flats fishing business and the Clearwater FL area. Operating a 20-foot Backcountry flats boat that allows me to get into shallower Waters to Target redfish  trout  Etc and be more stealthy with 1 to 2 clients is what inshore Flats fishing has been about. Whether you are a pro or novice you will experience and learn the true art of sight casting with artificials or fly fishing and even some live bait it's how the business was started. Most Charters have went to 24 to 27 foot Bay boats that have a heavy draft and can accommodate more people which means they need lots of water and can't get to the fish with stealth, but that is not The true Flats fishing motto. With the fall months ahead of us Waters on the flats will be lower for the next few months which makes it ideal for my skiff to get to where most charter boats can't and give you that shot at tailing redfish or big trout laid up in potholes, so if you want to experience what true Flats fishing is all about come join us at skinny water charters 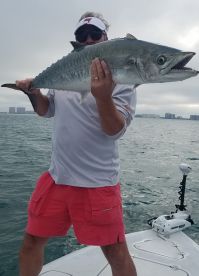 A great experience
Fishing is starting to get more diverse with the cooling of the water and the cold fronts. Redfish have started to push more up along the shorelines of the mangroves bait of choice has been small pinfish or grass grunts under a Cajun Thunder pop and cork. Most fish have been on the sand edges right before the oysters on the shoreline roughly 20 to 30 feet from the mangrove shore lineFish are averaging 24 to 30 in. Kingfish are here in big numbers right off the beach and will test your light tackle. If you want to get out and see what it's like to have a 30lb+ Fish burne 400 yards of line off at 35 miles an hour now is the time for the next few weeks. Speckled trout are showing up in better numbers when fish averaging 18 to 26 in white Bait has been the bait of choice but artificials have been producing better quality fish such as zara Junior top Waters and darker colored 5in jerk shad on a 4ot 1/6oz worm hook. Now's the Time to put that Charter and enjoy some cool weather and great fishing 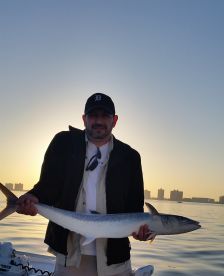 Come enjoy Clearwater
After our recent hurricanes that stayed east and shorter days, water temperatures have dropped from 86 to 80 degrees. Fish are on the move and the chew. King Mackerel have just started to make their presence known in the clearwater area. Live Shad, Ladyfish, and threadfins are just a few baits to catch one of the speedsters, also known as a smoker. Also redfish are in big nubmers. Cut Ladyfish can't be turned down by these bruisers of the flats. Other baits such as Pinfish and Scaled Sardines will get the job done. Spanish mackerel are all over the west central beaches right now a well full of live scaled sardines and thread fins well put these tasty speedsters into a frenzy with multiple hookups. Other game fish that we we'll be targeting spotted sea trout , Cobia , as well as a few big spinner sharks mixed in with the Spanish and king mackerel So start to book your trip wether you are a pro or a novice on fly, spin, or artificial. There are many different species to target right now off the Clearwater beaches and back water flats. Thanks, Capt. Craig