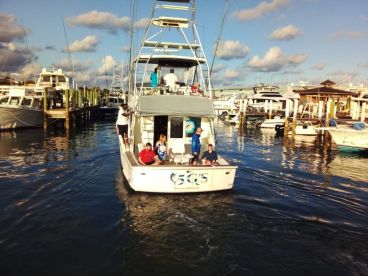 You’ll be fishing on a 45’ Hatteras luxury sportfishing vessel capable of holding your fishing crew or the entire family. The maximum capacity is 10 anglers plus the Captain and First Mate. Enjoy total comfort on your private charter, which features a full media center, toilet, and shower, as well as an air-conditioned cabin. 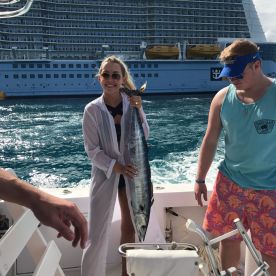 The local fish species are bountiful and very fun to catch – Amberjacks, Barracuda, Mahi Mahi, Yellowtail Snappers, Wahoo, Skipjack Tuna, Sailfish, and finally, the Blue Marlin. Throughout all of this you’ll be assisted and instructed by Captain Shalako Moxey, the owner and a fisherman with over 30 years under his tackle belt. You’ll go reef fishing, bottom fishing, snorkeling and spearfishing, and deep sea fishing. You’ll go up to 20 miles offshore on longer trips. 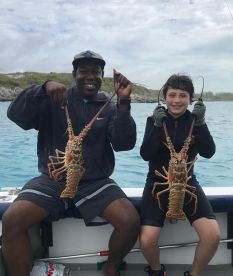 Experience the Bahamas in true local style with Captainctours. From Lobster diving to deep sea fishing in the heart of the Atlantic, you’ll have the chance to really get to know the crystal clear waters, fishing to your heart’s content and landing plenty of delicious creatures to take back to shore. 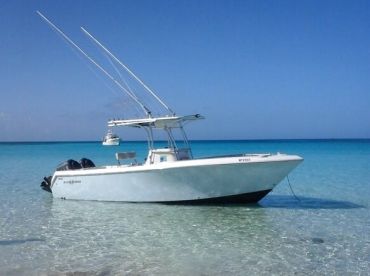 If you’d like to explore the beautiful waters of the Bahamas, join Hunter Charters and have an exciting adventure! Captain Paul Smith is the charter owner, specializing in all types of fishing techniques Nassau is popular for, including big game, light tackle, and bottom fishing, to name a few.

Since the middle of the 20th century, the Bahamas have been known as one of the most prominent sportfishing destinations on the globe. With over 700 islands located just 50 miles from the US, the sky's the limit when it comes to the deep sea fishing the Bahamas has to offer. In addition to a whole universe of big game species roaming its waters, this coral archipelago is home to numerous sportfishing tournaments and over 50 angling records.

Many die-hard anglers think that the best fishing in Bahamas starts and ends with battling Blue Marlin. They range from 200–1,000 pounds and can be caught in numerous locations scattered throughout the country. Bahama fishing trips will also give you a chance to land 20–60 lb Mahi, 40–120 lb Wahoo, colossal Bluefin Tuna ranging from 300 to 1,000 pounds, and Yellowfin Tuna, usually in a 100 lb range. White Marlin and Sailfish can also be caught, but the most sought-after trophies remain Blue Marlin and Bluefin Tuna.

With over 700 island and cays filled with Bahamas fishing resorts, it's not easy to decide what the best fishing grounds in the Bahamas are. The experienced local guides can help you choose the perfect spot, but regardless of the species or the style of fishing you're after, the following locations are a no-brainer.

Commonly referred to as the birthplace of Atlantic sportfishing, Bimini has a reputation for being one of the top big game destinations in the world. This is where Ernest Hemingway practically invented Bluefin Tuna fishing. Many crucial deep sea fishing elements originated here, including Fin-Nor reels, ballyhoo rigs, the Haywire Twist, and the Bimini Twist knot.
Located right along a drop off in the Florida Straits, Bimini sits beside a migratory path of Blue and White Marlin, Bluefin and Yellowfin Tuna, Sailfish, and giant Wahoo. Despite being famous for Bluefin Tuna in the past, the best fishing in Bimini nowadays revolves around targeting Yellowfins.

If you're looking for some of the best experiences a professional Bahamas charter has to offer, Walker’s Cay is your place. Situated 150 miles from Fort Lauderdale, it’s the northernmost island in the country and a part of North Abacos. It offers some of the best sportfishing in the Bahamas, especially when it comes to Blue Marlin. In addition to Blue Marlin, in these deep waters, you can catch White Marlin, Yellowfin, Sailfish, giant Wahoo, and plenty of Mahi.

Nassau, the capital of the Bahamas, is known as a popular tourist destination, as well as the go-to place for anglers interested in having a premium Bahamas fishing vacation. In addition to great Bonefishing, Nassau fishing excursion will also give you a chance to experience some of the best deep sea fishing in the area. The biggest asset that any Nassau charter has to offer is winter fishing for Wahoo. You can also go for Sailfish, Marlin, and many other A-listers roaming these blue waters.

When it comes to Grand Bahama fishing, Freeport, the second largest town in the country, is at the top of the list for many hardcore fishers. Fishing in Freeport, Bahamas can provide some great offshore action with the help of knowledgeable local guides. Freeport fishing charters can take you after Tuna, Mahi, and Wahoo anywhere from 2–20 miles offshore, or even more if you book a longer trip.
Chub Cay on the Berry Islands is the birthplace of the Grand Slam – catching Blue Marlin, White Marlin, and Sailfish all on the same day. Other productive deep sea destinations include Treasure Cay, Boat Harbour, Eleuthera, and more.

All you need to know about fishing seasons in the Bahamas is that every single month of the year can be very fruitful, depending on the species and the location. You can catch Blue Marlin in these waters year round with the end of March through the beginning of June as the best period. If you're after White Marlin, focus on January–March. Wahoo fishing can be especially good in the winter, and the largest specimens are caught from September–December. November and December are the peak months, especially in the waters of Bimini. The best time for Yellowfin is late February–April, while spring brings excellent Mahi fishing, with the biggest specimens caught in March–May.
Whether you're after setting a new record in one of the many deep sea tournaments or just want to come home with brag-worthy fishing stories after a family vacation, you can't go wrong with the Bahamas.
Bahamas
4.2 / 5
Based on 24,785 reviews by FishingBooker anglers

4.9 / 5
(29 reviews)
4.9 / 5
(29 reviews)
Paradise Island • 48 ft •  8 persons
With more than 35 years in the fishing charter business, Chubasco Charters are determined to serve you and your party to the very best of their abilities.
"Had a great full day trip with Chubasco! Started trolling as soon as we got out of the harbor and hooked up with a big Mahi within 15 minutes." —⁠ Jeff, NC
Instant Confirmation
trips from $1,050

What anglers said about Deep Sea Fishing in Bahamas

What anglers said about Deep Sea Fishing in Bahamas 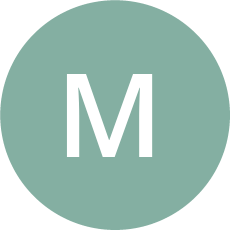 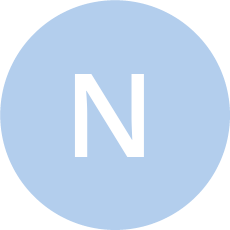 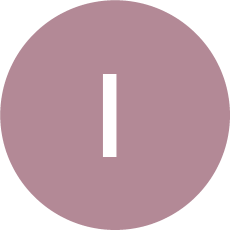 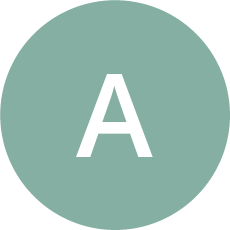 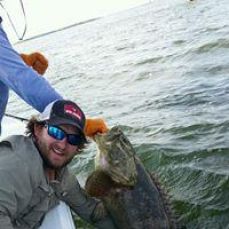 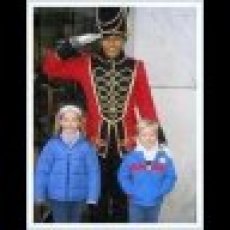 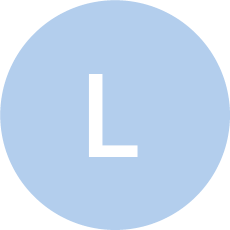 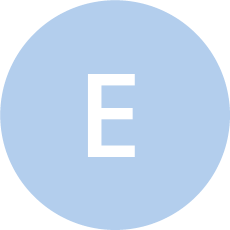