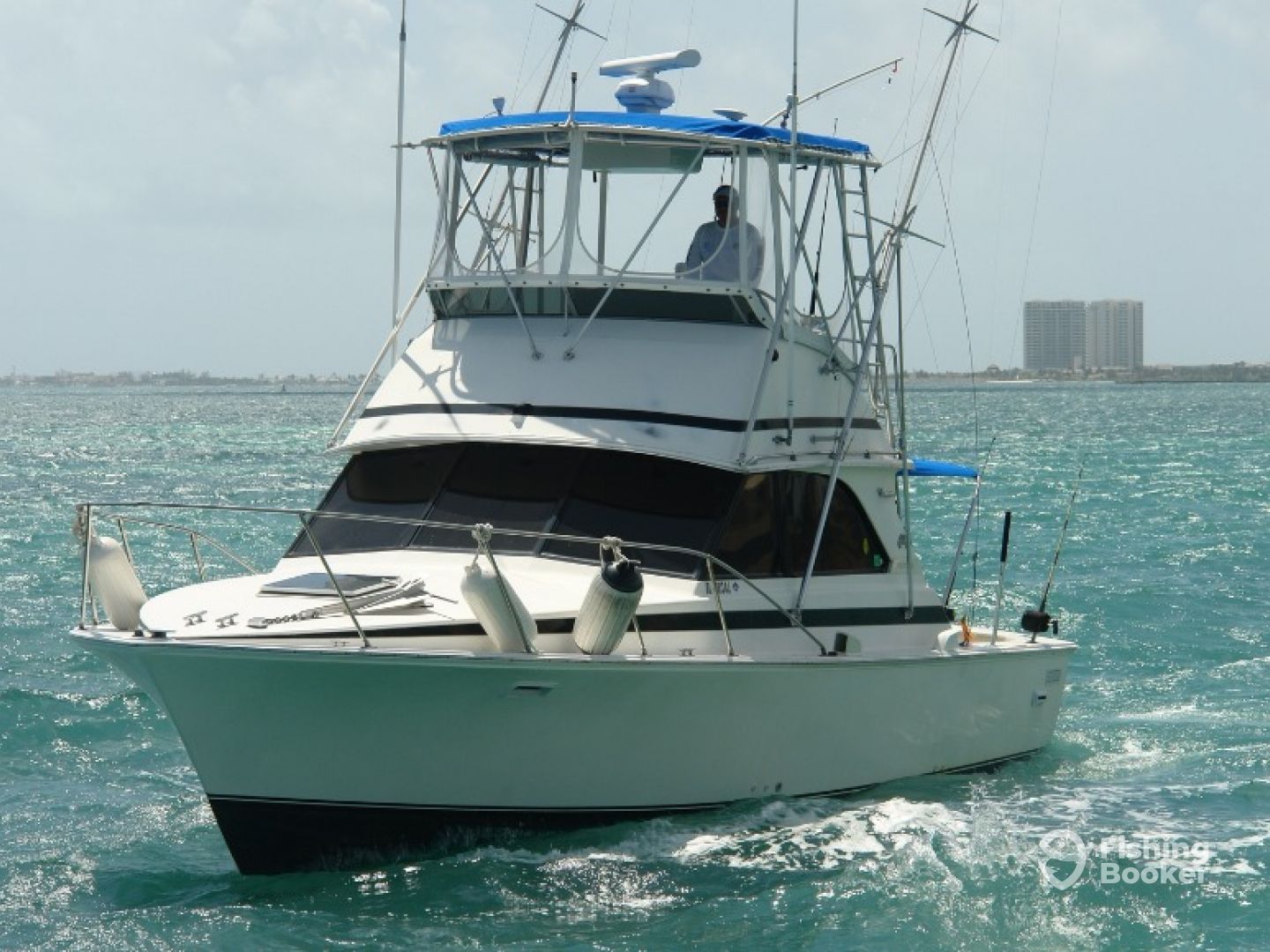 Whatever you choose to do on your trip, there is no better place to do it than aboard Fishing Cancun Charters’ 35’ Bertram sportfishing boat. Completely restored in 2013, the vessel boasts an air-conditioned interior to keep you cool even in the heat of the Mexican summer and an enclosed toilet for extra comfort on long offshore adventures. 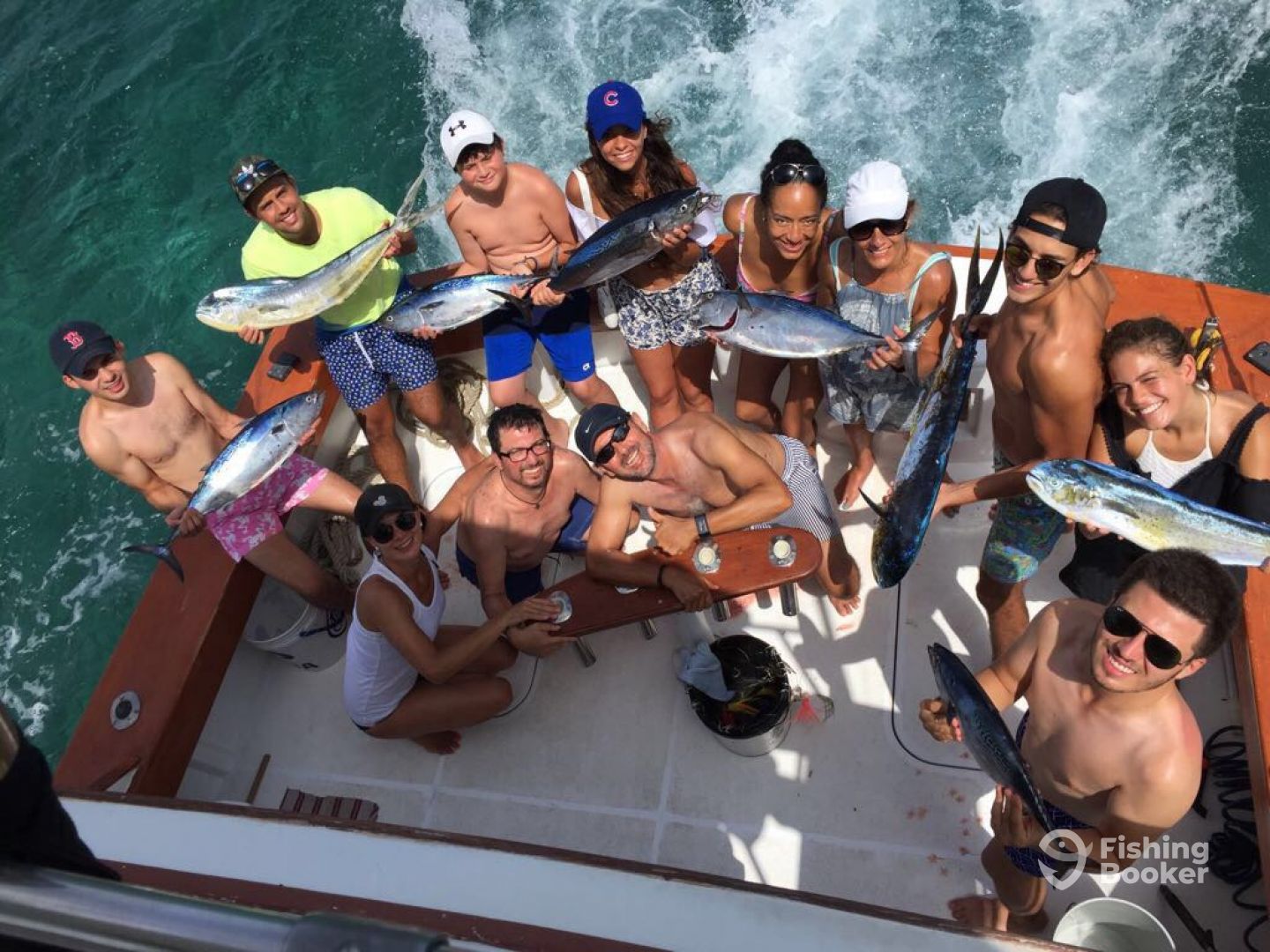 All trips come with tackle, lures, live bait, and licenses, and the crew will also clean and fillet all your catch at the end of the trip. So whether you want a morning on the reef or 10 hours offshore, you can trust the La Patrona team to get you hooked on that fish of your dreams. 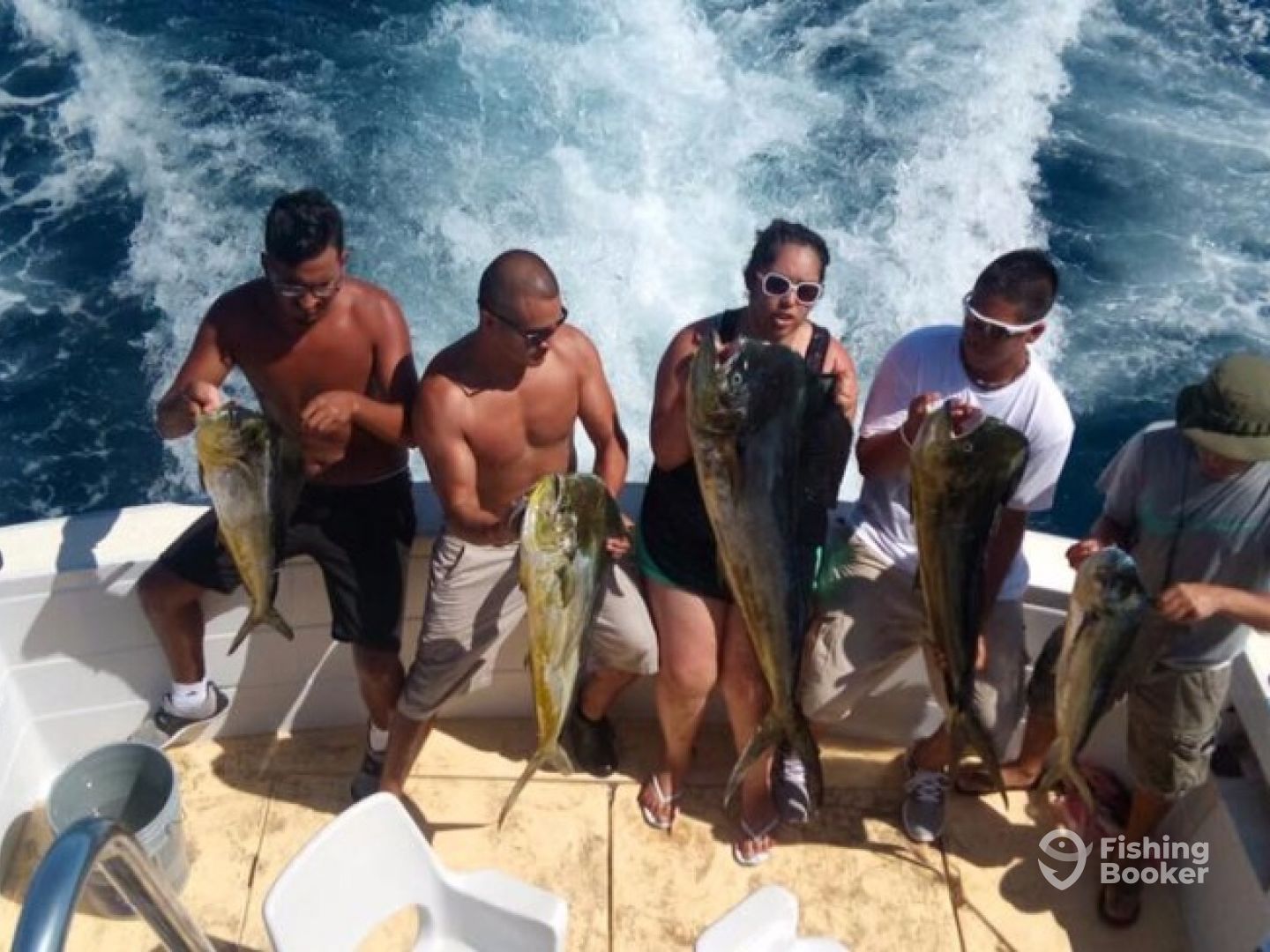 Enjoy your on a spacious 29’ boat, powered by a twin 60 HP Suzuki engines. It can comfortably hold up to 6 anglers. The boat has top-notch navigational electronics, which include a GPS, a fishfinder, and a VHF radio. As well as that, the boat is equipped with downriggers, an ice-box, and a fighting chair for those who are up for a challenge. 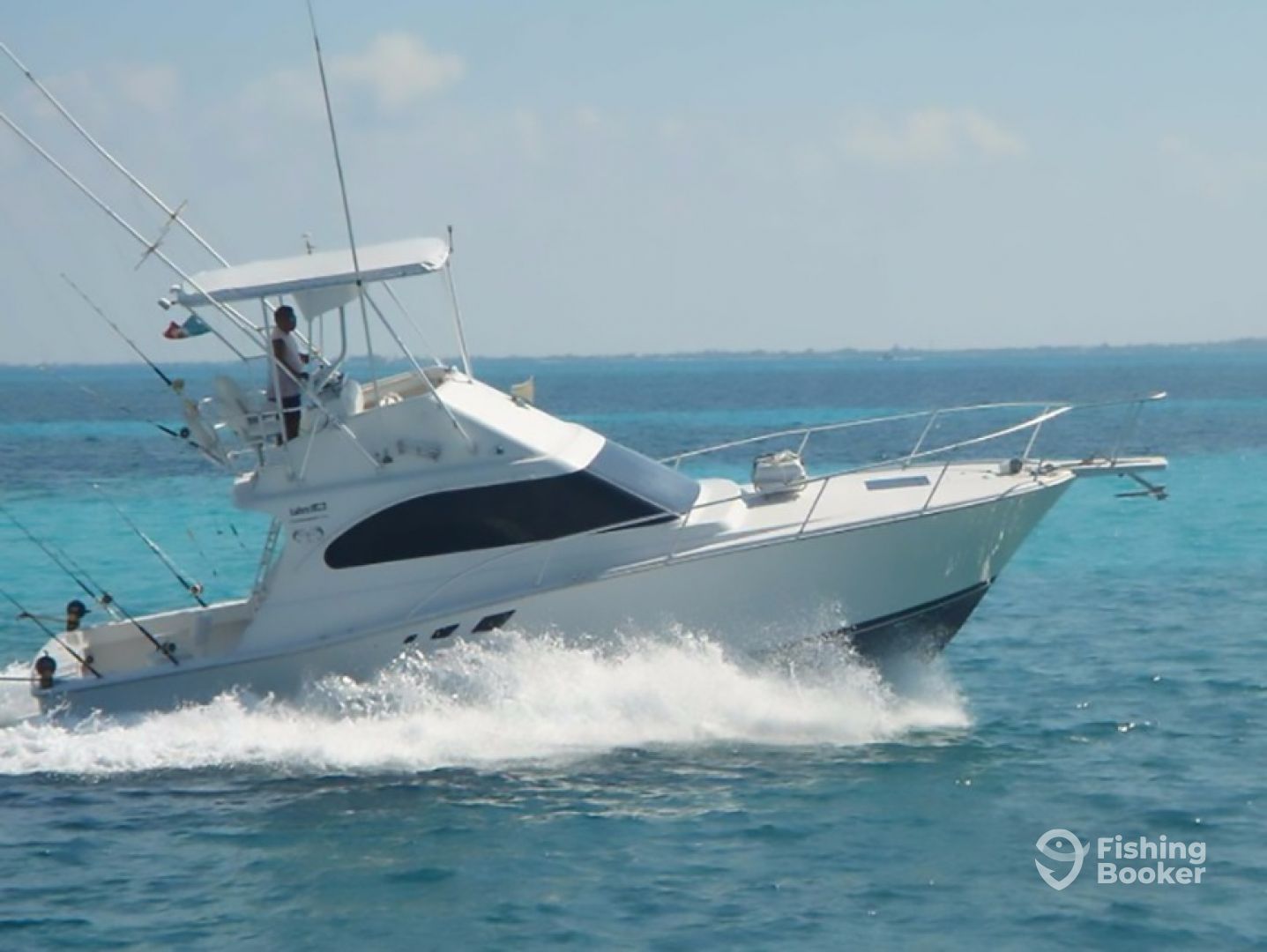 The Heavenly is a 36’ Luhrs offshore sportfishing boat, that’s designed with your comfort in mind. With an air-conditioned cabin, she’s perfect for those hot Mexican days. With two fighting chairs, outriggers, downriggers, and a full assortment of navigational electronics, the boat has everything you need for a productive day on the water. There is also a real bathroom on board, as well as a comfortable indoor area for relaxation on the way to the fishing grounds. 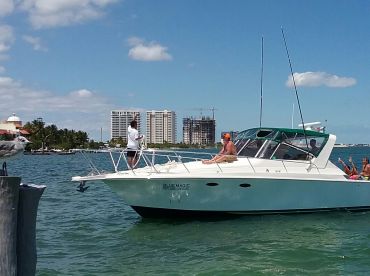 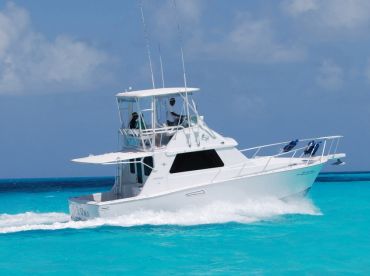 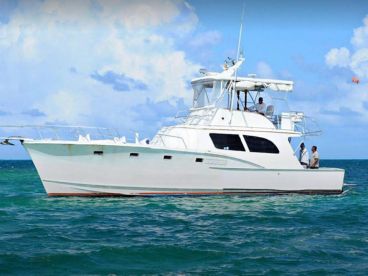 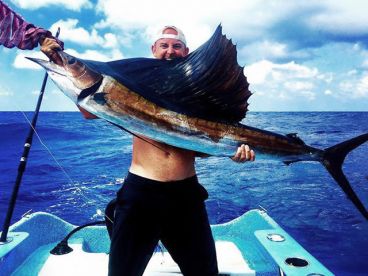 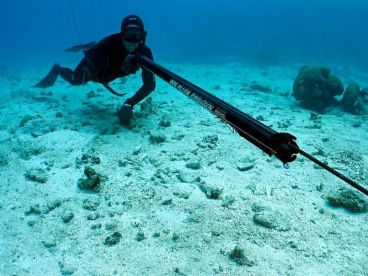 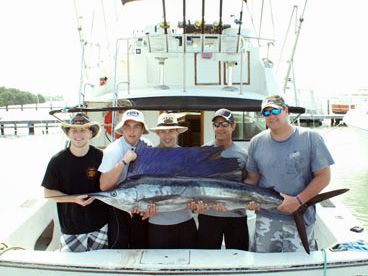 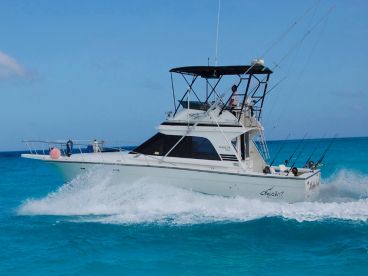 Ranked among Saltwater Sportsman’s top 12 billfishing destinations in the world, there’s a lot to like about Cancun deep sea fishing. Huge packs of Sailfish decimate bait schools offshore, joined by both Blue and White Marlin for almost half the year. And it doesn’t end there. Mahi Mahi, Wahoo, and Blackfin Tuna all tag each out as the year rolls on. They say the party never stops in Cancun. What they don’t tell you is that the real action happens out at sea!

You have to travel at least 20 miles to enjoy Cancun’s best big game battles, and some of the Sailfish grounds are over 30 miles out. That’s still no further than you’d go to find Snapper in the Gulf, though, and what you get here is bite after bite of monster pelagics.
Boats have released over 100 Sails in a single day fishing out of Cancun. It won’t just be Sailfish, either. A Billfish Grand Slam is well within reach of ambitious anglers in these waters. Even when they’re not around, you have massive Tuna, Wahoo, and King Mackerel to keep you busy.
So why do they all come here? Cancun juts out on the tip of the Yucatan Peninsula, where the warm waters of the Caribbean Current flow into the Gulf of Mexico. This puts you on the path of major migrations, with the narrow straits of the Yucatan Peninsula bunching them all together. Essentially, you’re sailing into the middle of a Big Game superhighway!

We keep saying this down here in Quintana Roo, but there really is no bad time to visit. Sailfish can be caught as early as January, and are joined by Blue and White Marlin in March. The best Billfish action runs May through July, when all three species chase bait, lure, and fly with endless aggression.
And that’s just part of the picture. Tuna, Mahi Mahi, and Wahoo run a relay race in Cancun’s bluewaters, and there’s not a single month without any action. Throw in the awesome winter Kingfish bite, and you’ve got your work cut out whenever you decide to visit.

Trolling is the go-to tactic for finding big fish in these waters. Dressed or even naked Ballyhoo drive Marlin and Sailfish crazy offshore, with dredge and surface teasers thrown in depending on what you’re after. Trolling live Bonito or Bluerunners is always an option, but you have to catch these on the go most of the time as tuna tubes are a rare sight.
If you’re up for even more of a challenge, some deep sea specialists offer big game fly fishing charters. Landing Atlantic Sailfish on fly gear is about as difficult as you can get and is the ultimate ambition of many seasoned fly fishers. If you’re used to fishing lakes and rivers, you’ll barely recognize some of the gear on these trips. Huge, 18-weight rods (yes, they make those), double-hooked big game flies, super-heavy sinking line. It’s fly fishing on steroids!

Licenses are provided by the boat on most Cancun deep sea fishing charters. You should always make sure when you book, though. Most local guides prefer catch & release for Billfish but expect other catch like Wahoo and Tuna to stay with the boat. This is something you should discuss before your trip if you have strong feelings one way or the other.
Cancún
4.33
Based on 21,036 reviews by FishingBooker anglers