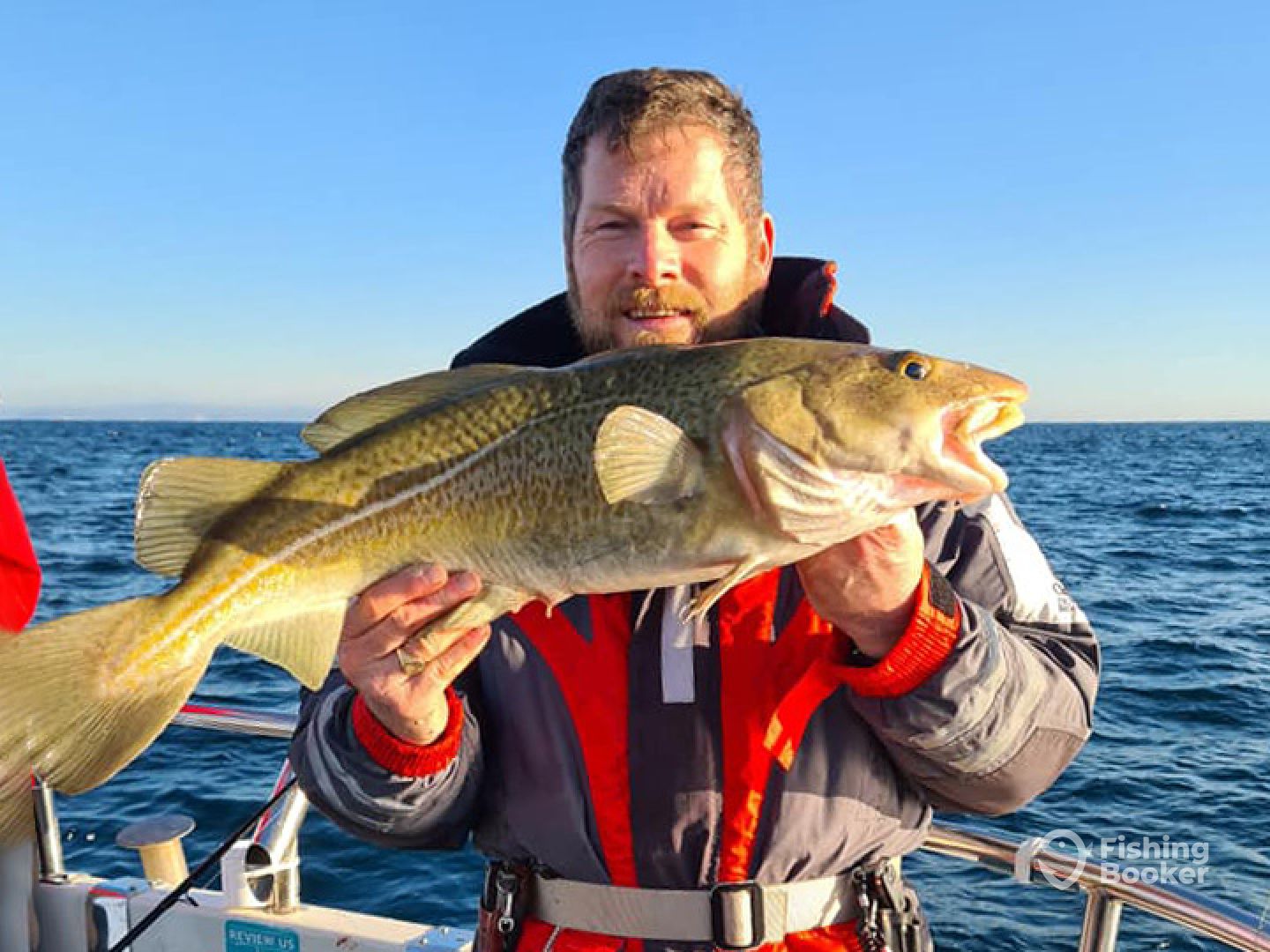 You’ll be fishing on a 38’ Aquastar that accommodates up to 12 guests. This fishing machine is powered by twin Iveco engines and features all necessary navigational and safety gear. There’s a private toilet, kitchen appliance, lots of seating space, a live bait tank, a cooler, any professional fishing equipment. There’s enough room for each angler to fish in comfort.

Fly fishing in England is the best way for serious anglers to wet a line and test their skills against their prey. When out on the rivers and lakes across the country, you’ll be targeting a range of Trout and Atlantic Salmon, making fly fishing synonymous with game fishing.

The open season for game fishing in England changes depending on where you are in the country and what you’re targeting. Generally, you can catch Brown Trout from March to October. From October onwards, Rainbow Trout and Grayling are good to target, allowing a year-round fly fishery in England. The Salmon bite is strong from March to November. Note that  most rivers have allocated months during which catch and release is mandatory, and some only allow fly fishing.

There are plenty of rivers and chalk streams across the country to fish in, such as the River Tyne, the River Avon, the River Test, the River Wharfe, the River Coln, and the Yorkshire Dales to name a few.

Everyone over 13 will need a rod fishing licence when targeting Salmon and Trout. Anglers between the ages of 13 and 16 are eligible for a free junior licence instead. Everyone with a licence must keep it on them when fishing. Some areas have additional by-laws which you must follow while there.

The size of the local fish varies across the country, so you might use anything from a 6–10’ fly rod. Use the right tackle to avoid a long fight with the fish, which will exhaust it and prevent a smooth release.

Different areas in England have varied restrictions on the types of flies you can use, including the use of natural flies, which aren’t allowed in the southeast. You’ll mostly be using dry flies when targeting Trout. Head over during the fly hatches in spring and autumn for the best fishing opportunities.

As well as the right tackle for the area and fish you’re targeting, you’ll also need to have your waders to hand. Remember to use barbless hooks so your fish can be released without damage.

Come down with your thermos of tea and cucumber sandwiches for a great day of fly fishing across the country!

England
4.56
Based on 22,047 reviews by FishingBooker anglers

Half day trip on the DukeIV with captain Bob
Gerrit V. fished with Duke lV Charterboat Ramsgate on August 8, 2020
Get to the boat on time. Don’t treat the fishing trip like a booze cruise. Respect the captain and his equipment. Take sunscreen, a hat and sea sick tablets if you’re prone to motion sickness. Be realistic about your expectations and enjoy the experience. Catching fish is a bonus!
Full day fishing 29.12.18
Ruth R. fished with Bonwey Charters on December 29, 2018
Wrap up warm with lots of layers and don't forget the legs need to keep warm as well.
full day
Paul W. fished with Bonwey Charters on August 27, 2018
Would highly recommed this skipper and deckhand, Made the day a good experience, being helful and knoledgeable. I cannot wait to book up another trip in October.