Catfish Noodling: Getting to Grips With a Unique Way to Fish

Catfish noodling takes the cake for the most unique type of fishing in America. In fact, many anglers don’t think of it as fishing at all. 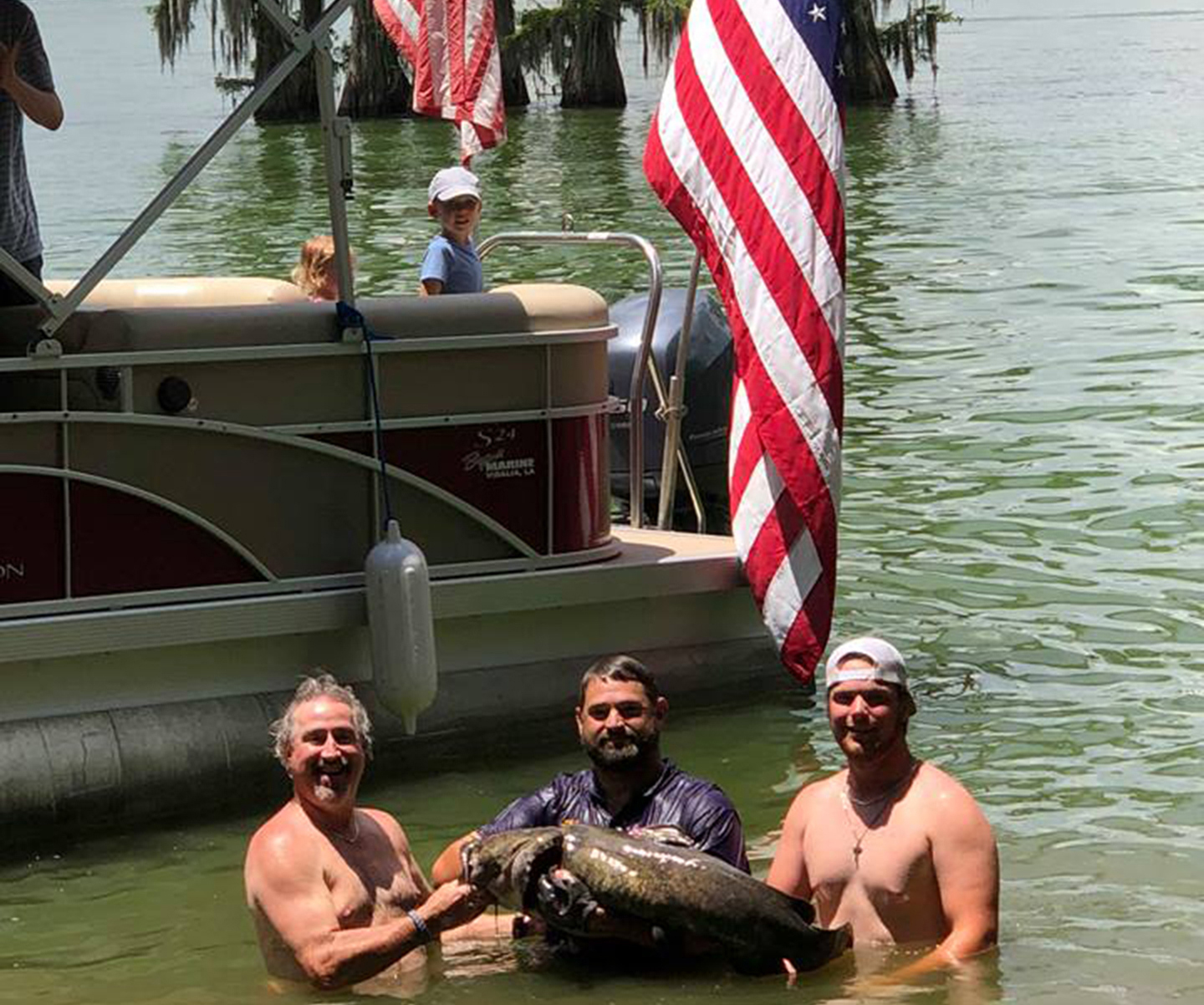 Throughout the South and across the Midwest, people spend their summers waist-deep in water and elbow-deep in huge Catfish. It’s every bit as extreme as it sounds, and is illegal in most states. Unsurprisingly, it’s a controversial topic among freshwater enthusiasts.

What exactly is Catfish noodling? Who in their right mind thought of it? And why is it a hot topic among catfishers and conservationists? We waded into these muddy waters to try and make sense of the issue.

Simply put, noodling involves finding a Catfish hiding underwater, sticking your arm in its mouth, and dragging it out of the water with your bare hands. You use your own fingers as bait and the Catfish’s bite as the hook. Because of this, noodling is also known as “hand-fishing” or “grabbling,” as well as more inventive names like “gurgling” and “cat-daddling.”

Where Did Catfish Noodling Come From?

People have probably been noodling Catfish for as long as they’ve known how to swim. Native Americans had certainly got it down by the time the first European explorers arrived. Some settlers learned how to do it, but it didn’t become common until the Great Depression when people started using it to put food on the table. Since then, noodling has grown into a family tradition in many parts of the country.

So, is it just an American thing? Not exactly. Cultures all over the world have developed some way of catching fish with your hands. Early settlers must have seen noodling as an extreme form of Trout tickling, a traditional style of hand-fishing in Europe. The difference is in the sheer size of the fish noodlers catch.

Where is Catfish Noodling Popular?

Noodling is most popular along the path of the Mississippi River, from Wisconsin all the way to Louisiana. It’s legal in 16 states, mainly in the South and the Midwest. That may not seem like a lot, but it’s up from only four states in 2001. In fact, more states are legalizing it every year – most recently West Virginia, which passed a new law on noodling in June 2018.

And that’s just where it’s legal. “Outlaw fishing” is a genuine problem in some states. In Missouri, for example, Catfish are seen as a game fish more than in most places and illegal noodlers are caught every summer.

At first glance, Catfish seem like the last species you would want to go mano a mano with. Catfish caught by hand can weigh well over 40 pounds. On top of that, they’re aggressive, they’re slimy, and they spend their lives digging through mud. It’s a far cry from tickling a Trout in a clean mountain stream.

However, there is a good reason people specifically noodle for Catfish: they don’t have teeth. A Catfish’s mouth is like sandpaper. It’s designed to grip anything that goes in and stop it from coming out. That’s great when Cats are hunting, but it also makes it much easier for noodlers to drag them out of their hidey-holes.

How to Noodle for Catfish

So, you know the broad strokes of what noodling entails and have a vague idea of how it all works. There’s a lot more to it than meets the eye, though. Here’s a run-down of how to grab a Catfish.

Noodlers aren’t looking after just any Catfish. They specifically target large males guarding their eggs after breeding. Catfish spawning season runs throughout the summer. As soon as the weather turns warm, people start searching their favorite honey holes on the hunt for this year’s trophy.

Catfish nest just about anywhere they can easily guard their eggs. Rocks, logs, caves, banks – even boat ramps can be great places to look. Once a noodler settles on a spot, they block all the exits and stop the fish from escaping. Usually, one person takes on the fish while the others help to block its path and make sure they don’t run into any trouble.

You can go noodling with nothing more than the shirt on your back. In fact, the first recorded sightings of Native Americans hand-grabbing fish mention them wrapping their clothes around their arms to entice the fish and protect their skin. These days, many noodlers wear special sleeves to prevent “river rash” – cuts and scrapes from the fish’s sandpaper bite.

This is where things can get dangerous. The hand-fisher tests the hole and feels for a Catfish. If they find one, they stick their arm in farther until the fish bites, then grab on. After that, it’s a case of muscling the fish out of the hole and onto land. If the noodler finds something else, they move away as quickly as possible and try a different spot – more on that later.

You may be wondering why noodling is illegal in most states. There’s no law against catching Catfish in general, after all, and noodling is very much a niche even in states where it’s allowed. Hand-fishing has its fair share of criticism and controversy, though.

Some see noodling as unsportsmanlike, as the fish don’t have the chance to escape and are forced to bite in order to protect their eggs. However, for most people, the issue is that hand-fishing is dangerous, both for the people doing it and for the species they go after.

The problem is that noodling specifically targets large, breeder males while they’re guarding their eggs. Harvesting these fish leaves the eggs defenseless. According to a spokesman from the Missouri Department of Conservation, these unguarded eggs usually develop algae and die soon afterward, wiping out thousands of the next generation of Catfish.

But it’s only a problem if they keep them, right? Surely people can just release most of the fish. Not exactly. Catching Catfish by hand tends to damage the fish. The most common places to grab hold are its jaw, its gill plate, and its guts – all things a fish needs in good working order if it’s going to survive. Even if the fish does survive, all that thrashing around can easily destroy the eggs.

Overall, it seems like noodling is a great way of harvesting fish, but a terrible way of protecting their population. The one upshot is that it could be a powerful tool against invasive Catfish populations, especially in parts of Oklahoma, Georgia, and the Carolinas, where invasive Catfish threaten local fish stocks.

As you can imagine, wrestling a 40 lb fish out of a narrow hole while you’re half- (or even completely) submerged in water comes with a few risks. If your clothes snag while you’re underwater, you can easily drown. That’s why noodlers always work in groups, with spotters on hand in case things go wrong.

Snags aside, there are plenty of dangers hiding under the surface. Large Catfish pack a serious punch. They can knock the wind out of you and even break bones. It’s not the fish that noodlers worry about most, though, it’s what else could be hiding in the hole. Snapping turtles, muskrats, beavers, venomous snakes – even alligators, depending on where you are. All things you absolutely don’t want taking a bite out of you.

A Tradition Worth Keeping?

There are arguments for and against Catfish noodling. Most noodlers see it as a time-honored tradition which their families have been doing for generations. On the other hand, it clearly is a threat to Catfish populations, which is probably why a 2005 survey found that avid Catfishers are actually more likely to oppose noodling than your average angler.

The truth is that this strong sense of tradition and the fact that noodling happens in pretty remote places mean that many people will keep doing it even if it is illegal. According to research from the University of Missouri, around 9% of anglers in the state have tried noodling, despite it being illegal.

Noodling is one of those things that seems harmless enough at first glance, especially when only a small group of people is doing it. Learn a little more about it, though, and it starts looking like just about the least sustainable way to catch Catfish. On the flip side, it could be the key to success against invasive Catfish – if you’re not scared of meeting the business end of a snake or a snapping turtle!

What’s your take on noodling – are you for or against? Have you ever tried doing it yourself? We would love to hear your thoughts and stories, so drop us a line in the comments below!