All You Need to Know About Tarpon Fishing in Florida
Updated on Jan 27, 2021 | 8 minute read | Written by Vukan Comments
96
Written by Vukan
Reading Time: 8 minutes

In this short guide, I’ll teach you the basics of Tarpon fishing in Florida. First, I’ll show you where to look for them, and at what time of year.  Next, we’ll look at which bait to use, as well as how to hook and land them properly.

The Tarpon (Megalops atlanticus) is among the most popular game fish in Florida. It’s well known for its acrobatics on the end of a line and capable of jumping up to ten feet out of the water while rattling its gills like an angry diamondback snake. They grow to massive size, with the current IGFA world record at 286 lbs 9 oz. Tarpon are also called Silver King, Silver Sides or Sabalo (Spanish). While they are edible, people rarely eat Tarpon because their flesh is filled with small, hard to clean bones. Tarpon’s preferred water temperature is in the 74-88 degrees Fahrenheit range. 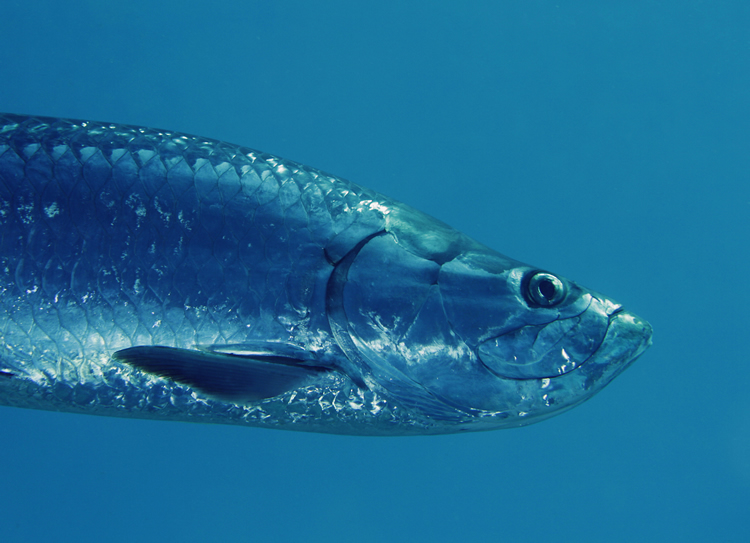 When is Tarpon Season in Florida

Tarpon are catch and release only in the state of Florida. Retaining the fish is only permitted if you are pursuing an IGFA world record and have purchased a Tarpon tag, which costs around $50 and is limited to one per year per person. Also, Tarpon fishing gear is limited to hook and line only. However, as long as you play by the rules, you’re in for a world of fun. Let’s take a look at when and where you can hook these monsters.

There is a large population of Tarpon around the Channel Bridges, Tom’s Harbor, Seven Mile Bridge and Long Key. Also, look for them on the flats. Jack Bank (near Marathon) and Buchanan Bank (near Islamorada Key) are good places, as well. While present near the Keys year-round, peak season runs from mid-March and until mid-July. During springtime, Tarpon are mostly on the Florida Bay side, but as the year progresses, they start moving to the Atlantic side.

The best locations are Key West Harbor, Bahia Honda Bridge and Marquesas Keys. May through late July are the best months here, with the exception of Key West Harbor which is full of feeding Tarpon January through March. The Marquesas Keys, since they’re uninhabited and not connected to Key West by road, have Tarpon in great numbers if you can get to them. The Bahia Honda Bridge is a disused bridge that used to connect Bahia Honda Key with Spanish Harbor. The waters surrounding it are full of Tarpon.

The Sandy Key and Rabbit Key Basins along with the canals at Lake Ingraham and river mouths of Lostman’s and Harney rivers. The Turner River at Chokoloskee is also a good location famous for big Tarpon. Fish are caught all year, with peak season from March to July, during the receding tide.

Florida’s West Coast from the Everglades to the Panhandle

Boca Grande is the most famous Tarpon fishing location in the world. The best months for fishing are May and June, when people from all over the world come to catch Tarpon. The flats surrounding Homosassa Bay and the Crystal River are also full of big Tarpon May through June. Apalachicola Bay is a good spot, from June and throughout the entire summer.

Although found throughout Florida’s Atlantic coast, ports and inlets south of Biscayne Bay offer the best Tarpon fishing. In particular, Government Cut (between Miami Beach and Fisher Island) and Port Everglades, from January to June. 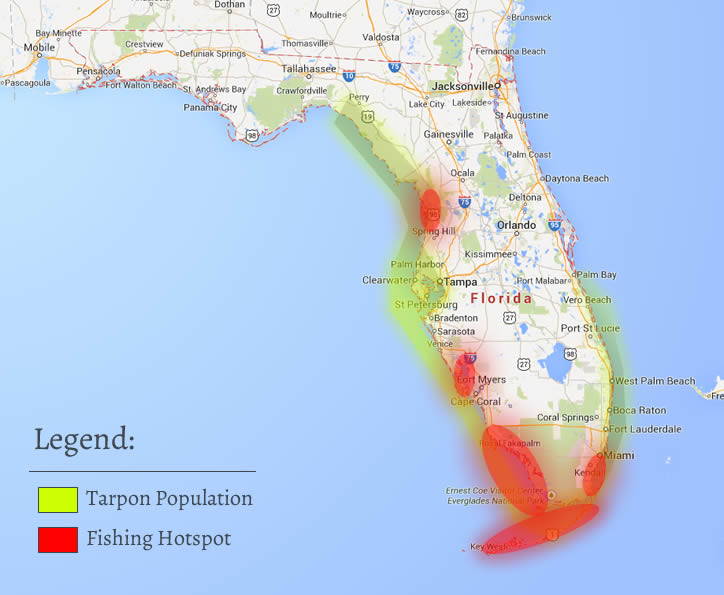 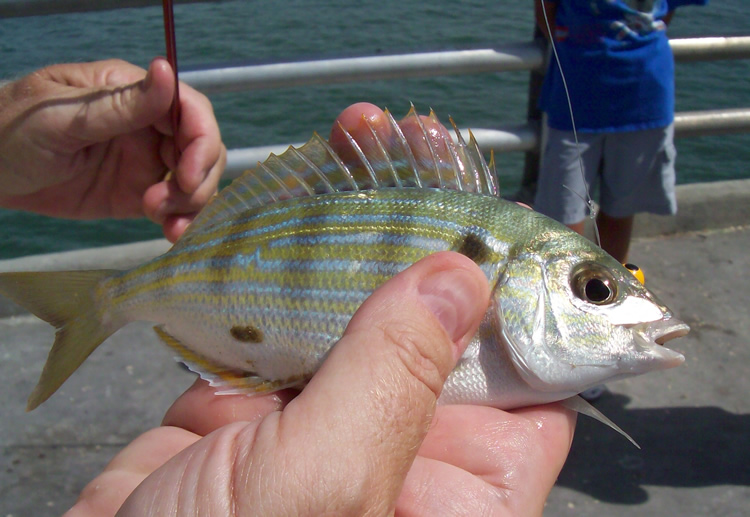 Pinfish are among the most popular baitfish used to catch Tarpon

With natural bait, you’ll get the best results during the ebb tide. Position yourself up-current and let your bait drift towards the fish. Double the end of your line at about 6′ with a Bimini Twist and attach about 8′ of 100 lb mono with a swivel. Use sharp hooks, as Tarpon have a hard, bony mouth that can be difficult to penetrate. Most fishermen land only about 1 in 5 takes.

Hook a large shrimp under its horn on the head or thread it and freeline it. Avoid using floats because they make it difficult for the shrimp to swim naturally. Chumming with small, cut up pieces helps. Hook size: 2/0-4/0.

Raise your rod as you cast to make the shrimp skip on the surface. Its movements will arouse a Tarpon’s curiosity. Keep casting until you get a bite. Crabs can be used instead of shrimp. Remove their claws and hook them bottom up. Cast towards a spotted fish and let the bait slowly sink in front of the fish.

Live or dead fish can be used as bait on the flats, as well as large cut up pieces of mullet, adjusting the float to keep baitfish out of the grass. Cast often and in front of sighted single tarpon. If you spot a pod, don’t scare them away by casting into the pod. Instead, cast nearby where they can notice it but not get startled.

In the fall and winter, rivers feeding bays are home to large schools of Tarpon. Methods and techniques explained so far will work but bottom fishing with live catfish or ladyfish can produce good results also. Large plugs trolled far behind the boat are effective. Biscayne Bay’s Turkey Point cooling canals are winter gathering places for Tarpon.

Follow the same location, time and tide guidelines as above. Work or troll your lure very slowly.

These lures have been proven to be effective:

Artificial lures are best used on the flats. Use lighter line and cast close enough to sighted fish for them to see your lure. Spinning lures and plugs should be retrieved slowly, letting the lure sink, then intermittently pulling the rod tip and reeling in the slack.

When fishing canals and rivers connected to salt water, use small Rapalas, Rebels, and round-headed crappie jigs about 1/8 oz.

Make sure that if you are fishing with jigs or other artificial lures, the lure is not weighted so it hangs below the hook when the line or leader is held vertically. Using weighted lures when fishing for Tarpon is prohibited and carries a hefty fine.

When fly fishing, the color of your fly depends on the color of the bottom. Flies 3”-5” long, with 2-2/0 hooks for juveniles and up to 5/0 for large fish. Choose a streamer that has good contrast with the bottom. Orange, yellow, and red patterns are effective over sandy bottoms, while light gray, blue, and light green is better over dark grass. When Tarpon are sighted feeding on mullet, 7”-9” white flies with dark stripes are good.

Retrieve your fly slowly in 6”-12” segments. Speed up and twitch more if a fish starts following to entice a hit.

When fly fishing canals and rivers, use a 5-7 weight rod, a 10 lb tippet with 20 lb 12” shock a 1lb 1”-2” streamer in white or yellow, the Dahlberg Diver, Marabou streamer, muddler flies, and all-black streamers in dirty water. Cast the fly right over a rising fish.

Avoid fly fishing for Tarpon around bridges. You will likely lose all fish on the surrounding obstacles.

How to Hook a Tarpon

Anglers frequently measure how good a fishing day it has been by stating how many Tarpon they “jumped”, instead of landed. This is because their very bony mouth makes it very difficult to set a hook well. Do not rely on hooks being sharp enough out of the box – supplemental sharpening is needed. 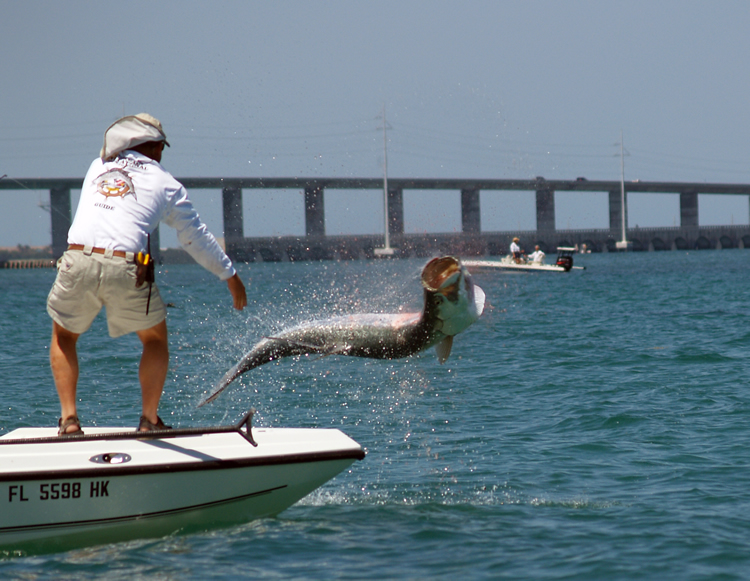 These fish can surprise even an experienced captain with their jumps!

Another problem with hooking Tarpon is in the strike: inexperienced anglers try to set the hook too soon.

Let’s cover natural bait first. When you feel the bite, take in the slack line, then wait until you feel the weight, and strike hard two times. It might also be a good idea to wait an additional second or two before setting the hook. Waiting will make sure the bait is solidly in the Tarpon’s mouth.

When using hard lures, strike as soon as you feel a heavy weight at the end of your line.

When fly fishing, most fishermen strike as soon as they see the fish eating the fly which is way too soon. Set the hook only when you feel the fish’s weight. If a Tarpon takes a fly while following it, stop stripping for a few moments to let the fly go deep into the fish’s mouth, then strike. If the fish takes while swimming towards you, set the hook several times in quick succession.

How to set the hook properly: keeping your rod tip close to the water, with the rod butt tightly secured against your belly, quickly rotate your body, making the rod move sideways while the line strips in hard.

In spite of all your efforts at hook setting, be prepared for the majority of fish to shake free.

How to Land a Tarpon

Once you’ve solidly hooked a Tarpon, expect lots of high jumps, somersaults, and gill-rattling. As your fish is about to leap, “bow” (lower) your rod tip and push it towards the fish to give the line slack. There is no holding a large Tarpon and no “horsing” it in, either. The drag on your reel will need help – hold your fingers so that you press the line against your rod and create additional resistance to the pulling fish.

When a Tarpon becomes exhausted, it will usually roll on its side. Using a short lip gaff, pass it through the fish’s lower lip and the fish will be held while someone removes the hook or clips the leader as close to it as possible.

Caution: Lifting a large fish by a lip gaff can injure it severely, so do not attempt to lift them out of the water. Remove the hook without lifting the Tarpon. 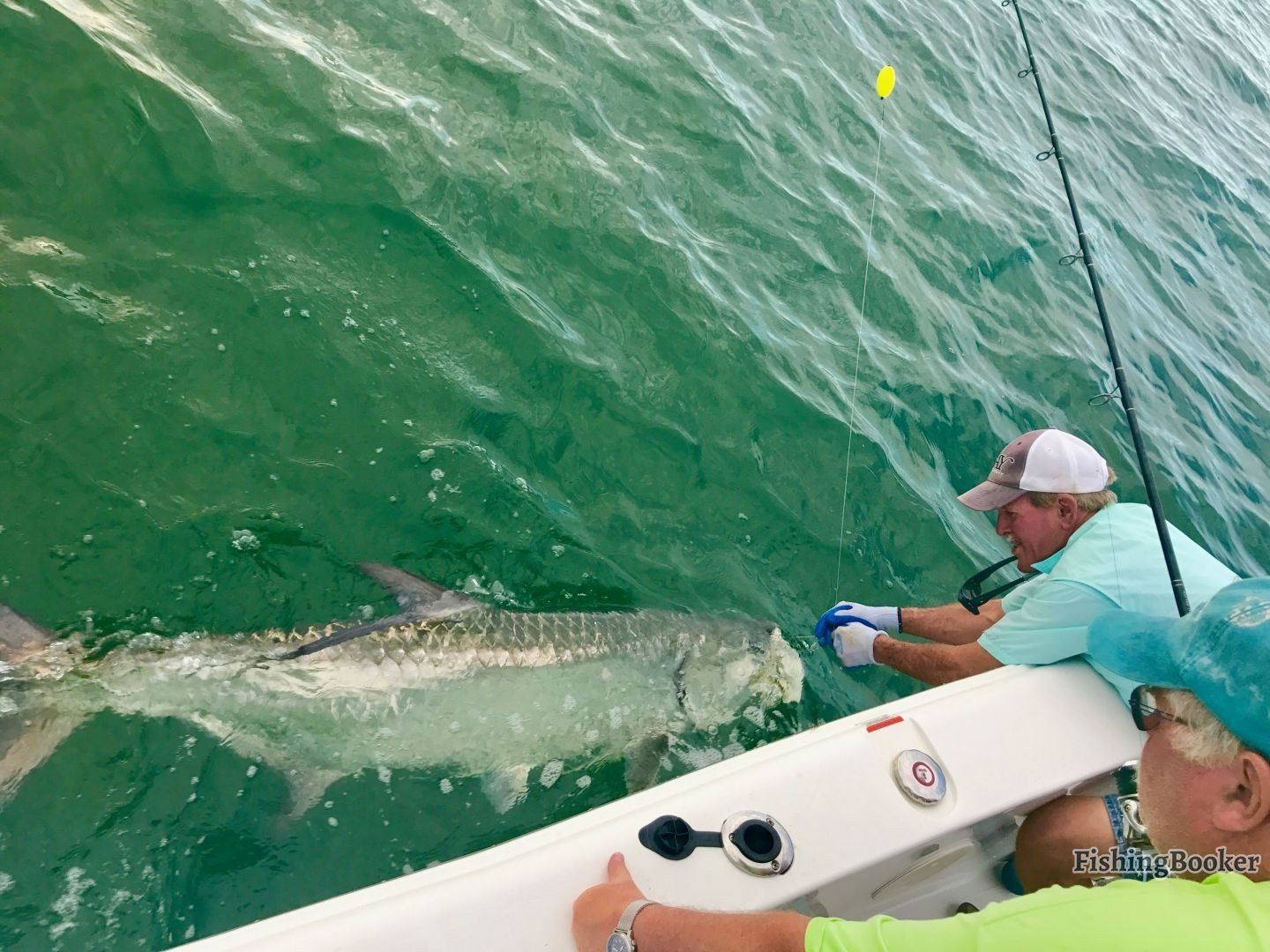 Because nearly all Tarpon are released, some fishermen remove or flatten the hook barb. Doing so will ease removal, but you will lose more fish.

After a fight, the fish will often need reviving. Hold it upright in the water, moving it back and forth to enhance water circulation through its gills.

Have you fished for Tarpon in Florida before? How big was it? What bait/lure did you use? Got some other tips you’d like to share? Let us know in the comments below!