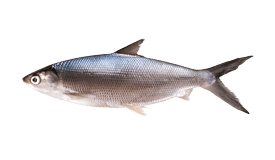 The Milkfish has got to be one of the most underrated sports fish on the planet. The only member of the Chanos species, it stands out in more ways than one. If you're up for a challenge, the national fish of the Philippines will certainly give you one.

MIlkfish fishing is not something for the faint hearted. First, they are incredibly spooky. Turning off your engine is a must. Then, they move incredibly erratically, making casting a complicated endeavor. And once you're hooked, expect blistering speed, a series of jumps, and obstinate runs. Possibly the reason you haven't heard of them is because its just so difficult to catch them. Imagine a Bonefish crossed with a GT, and you'll get the picture.

Catch a Milkfish on the fly

You'll need a rod with some weight to it. Fly fishers will want to come prepared with a 9-10 weight 9 ft fly rod. Come prepared with Arno's Milky Dream, hands-down the most respected fly for this species.

The Milkfish lives in the Indian and the Pacific Oceans. Look for them anywhere from Australia to Hawaii, Seychelles, and California.

Despite being notoriously bony, Milkfish are a staple part of Indoneisan cuisine and taste good smoked or pressure cooked.