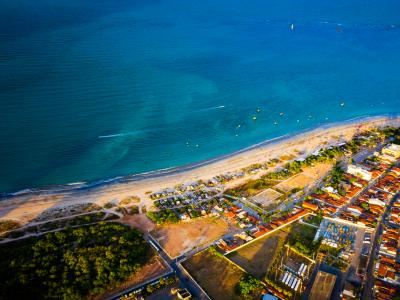 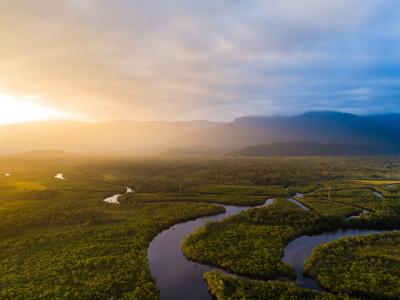 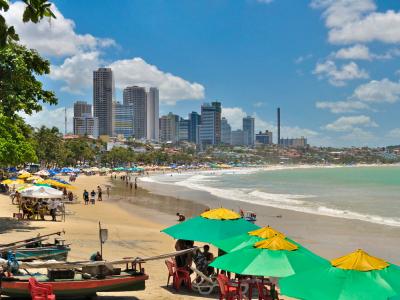 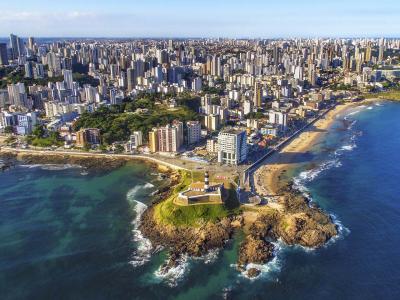 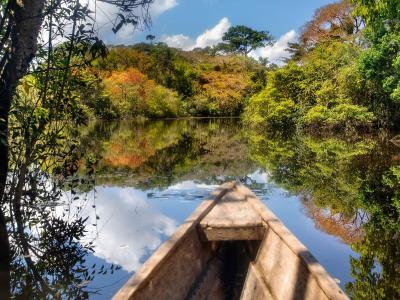 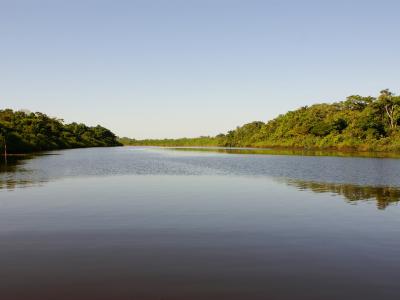 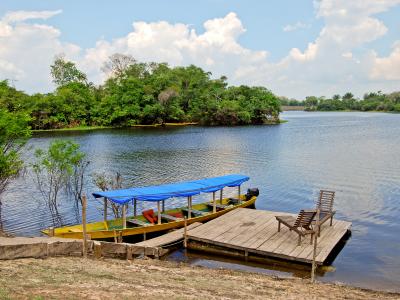 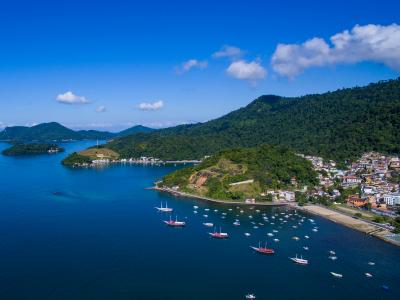 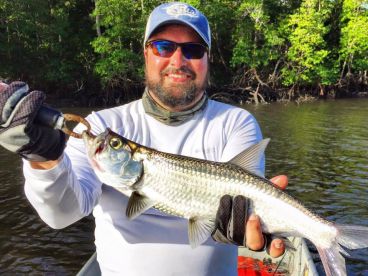 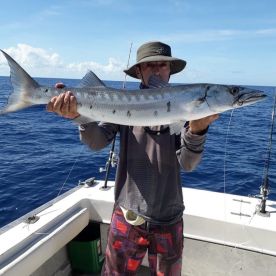 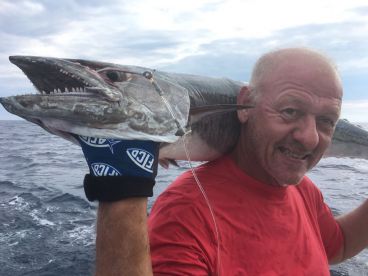 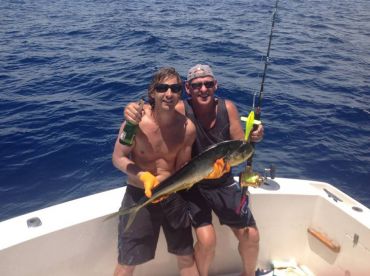 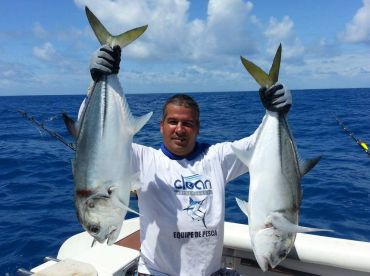 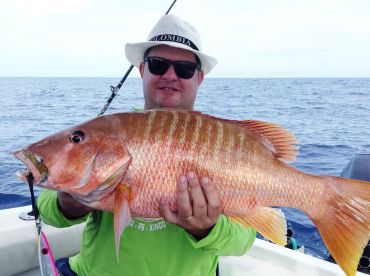 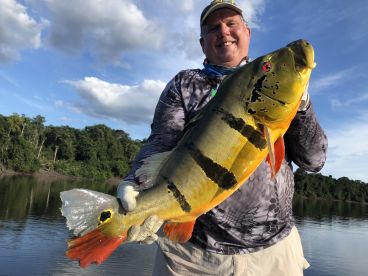 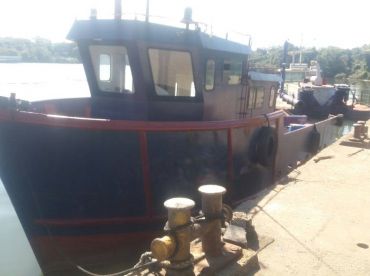 When you think of Brazil, the famous Rio de Janeiro Carnival might come to mind. You'll also picture the beautiful beaches, fast-paced dances, the Amazon rainforest, and the yummy Caipirinha cocktails.

Yet as much as there is to do and see on land, the activity on water is at least as exciting – the fishing in Brazil should be on every anglers bucket list. Whether you’re a beginner or an experienced angler, there’s a fishing trip out here for you.

With over four and a half thousand miles of Atlantic coastline, Brazil's saltwater fishing has a lot to offer anglers. It's a hidden gem when it comes to large pelagic fish – Bahia holds the IGFA world record for a 1,402 lb Blue Marlin and a huge White Marlin. And it’s not just the size of the fish that's impressive – the Billfish here can be found in large quantities, with plenty of hook ups a day. But many people are still unaware of just how great the offshore fishing is in Brazil.

In some places along the coast, like Cabedelo, the continental shelf drops away just 25 miles from shore. This will get you to the fishing action in no time, allowing you to target Blue and White Marlin, Sailfish, Mahi Mahi, Yellowfin and Bigeye Tuna, and Wahoo. Closer to Rio de Janeiro, you’ll need to head 30-40 miles from shore, but the catch is just as impressive.

Most saltwater sportfishing boats include all the comfort and amenities you'd expect for you and your family, but freshwater trips are usually more tailored for people who are ready for an adventure. This allows even beginners to enjoy their day.

Beginners will love fishing the brackish waters of Natal. This is where you can target Tarpon, Snook, Jack Crevalle, and Mangrove Snapper year round. This is a safe city known for its beaches and nature. You’ll be able to fish lagoons, rivers, and salt water marshes here, as well in nearby João Pessoa and Pipa. These trips are usually all catch and release and most charters provide all the fishing gear you need.

Fishing in the Amazon

If you’re a serious angler and want to test your skills with some extreme fishing, then you should head out for a trip in the Amazon.

You could find yourself going up to 380 miles upriver on these trips, getting deep into the Amazon to practically untouched waters.

The fishing here is strictly catch and release, and boy are you catching some monsters! Expect to target giant Peacock Bass (the biggest Bass in the world), Piraíba (the biggest Catfish in the Amazon), Pirara (Redtail Catfish) and Payara (Vampire fish). There are another 6,000 species that call the Amazon home, both on land and in the water, so have your camera ready!

The IGFA record for Peacock Bass was caught in these waters, weighing a staggering 28 lb. You can easily catch 20–30 fish per day when fishing in the Amazon River.

As well as the Amazon River, you can also fish the Rio Negro (Black River) and the Juma River. You can fish here at different times when the waters of the Amazon recede during the dry season. Generally, this fishing is available from October to March.

Most trips in the Amazon are overnight trips, with lodging and conventional fishing gear included. You can bring your own equipment if you want to challenge yourself and fly fish. Fly fishing can be very productive but is extremely tiring, so be ready to switch tactics during the day.

Check before you travel if you need to get a visa for entering Brazil. You must have a fishing license for your trip – luckily, these are almost always included in charter trips. One fish under 30 kg (66 lb) can be kept under this license.

Check the captain’s policy before the trip to see if you should bring a cooler for the catch or not – it’s likely that the crew will keep the majority of the catch. You’ll also need polarized sunglasses to help with the glare from the sun, sunscreen, appropriate clothing, and mosquito repellant.

Whether you’re Peacock Bass fishing in Brazil or heading offshore to chase down pelagic monsters, you’ll have an unforgettable adventure when you go fishing in the largest country in South America!

Women will enjoy participating in the “Elas and Elas” fishing tournament (“Hers and Hers”) targeting Billfish. Experience isn’t essential so grab a rod and come have some fun.

Join the biggest party on earth, with the carnival in Rio de Janeiro. Or visit the Festa de Iemanjá in Salvador to honour the Goddess of Water.

If music festivals are your thing, book tickets now for Lollapalooza in Sao Paulo. There’s also a beer festival in Blumenau to enjoy.

With rain likely this month, plan to visit the indoor sites so your day isn’t interrupted by the weather. Billfish fishing slows to a halt this month, but Snapper is still good to target.

On land, head to the food festival of Brasil Sabor. Restaurants will follow a theme and prepare new food to try.

Head to the north for another festival, the Parintins Folklore Festival. Expect dancing, competitions, singing, and fireworks.

Learn about the cultural and religious heritage of Brazil this month, as the whole country celebrates saints this month, including the nativity of St. John the Baptist.

The national drink in Brazil is the Caipirinha. Celebrate this beautifully simple drink at the Festival de Cachaça. Drink, eat, and dance the night away!

September to December is the spring season in Brazil, and it’s usually dry. This is when you can start fishing for Peacock Bass in the Amazon, when the waters have receded back to the rivers.

Billfish action heats up 30 miles out from Rio de Janeiro from now through to January. There’s a religious festival along the River Amazon called Cirio de Nazare this month, too.

It’s all about the F1 Grand Prix this month. Offshore, you can target Blue and White Marlin,Tuna, Sailfish, and Mahi Mahi.

For 5 days during December and January, you can participate in the Billfish Tournament. The “Sailfish Tournament" will catch around 500 sailfish during these 5 days.