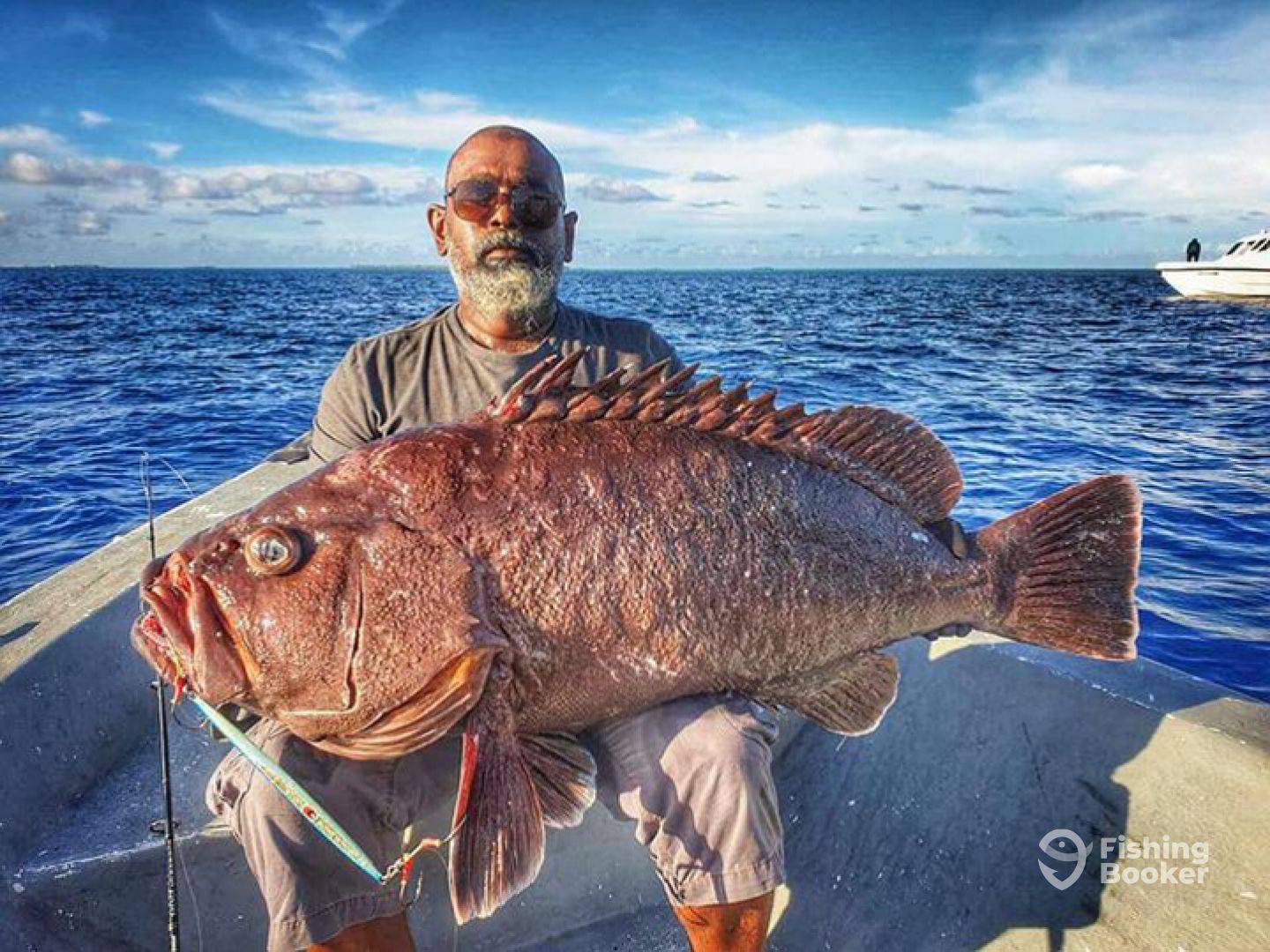 This is where your big game fishing adventure begins! Join Maldivian Fish Hookers for a day of pure excitement and catch trophies you’ll be proud of. Captain Mohamed has been fishing in these waters his whole life and he specializes in getting those monster fish that look unreal. Whether you’re a beginner or a seasonal angler, you’ll have a blast on this trip. 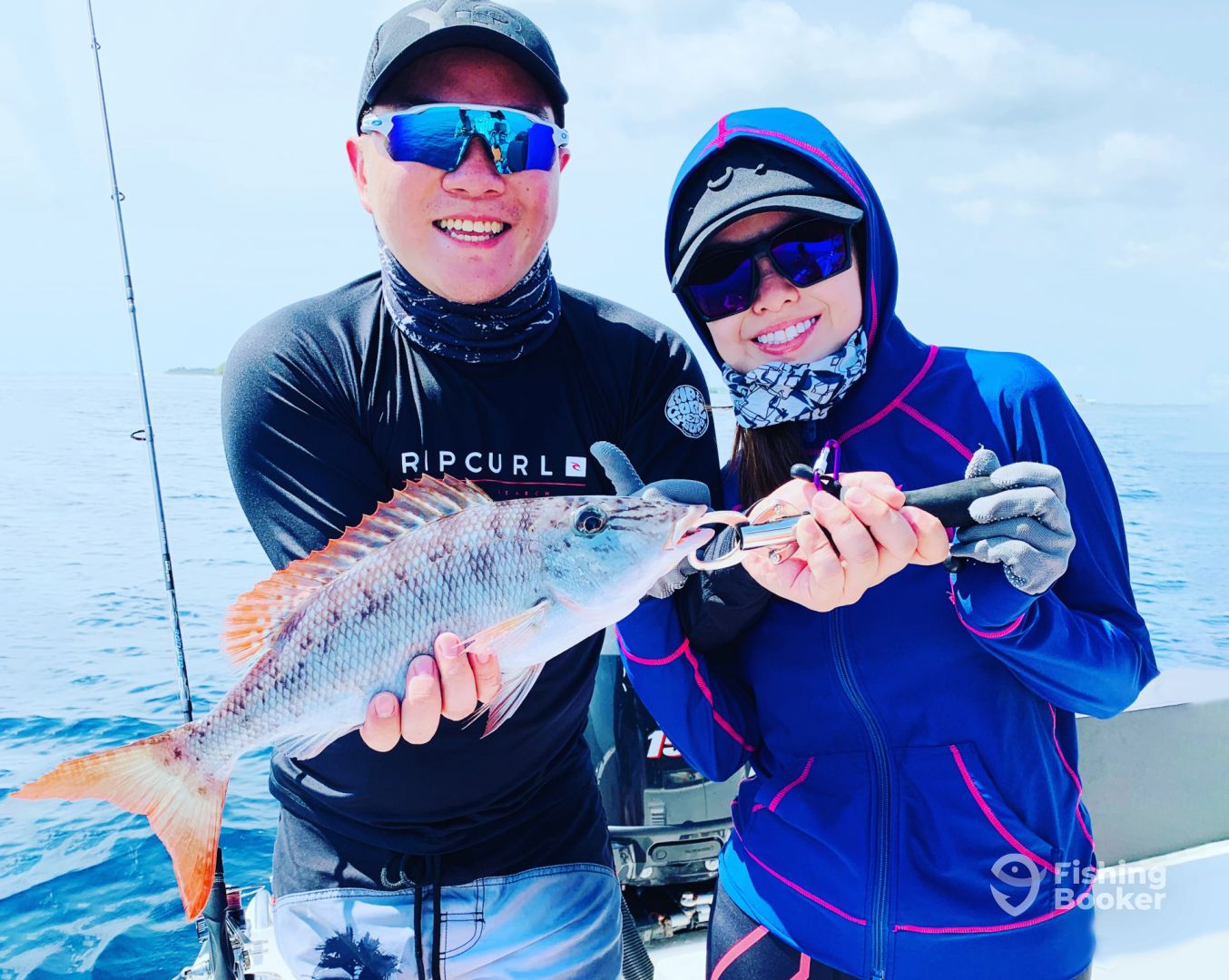 Your day will be spent on board his 26’ offshore sport fishing boat. This boat is designed to cover great lengths and to give you the extra edge when facing big predators of the deep. There’s a large deck, as well as plenty of seating for the ride out. Groups of 6 will be comfortable, but groups of 4 are ideal – this way, all 4 of you can fish simultaneously. 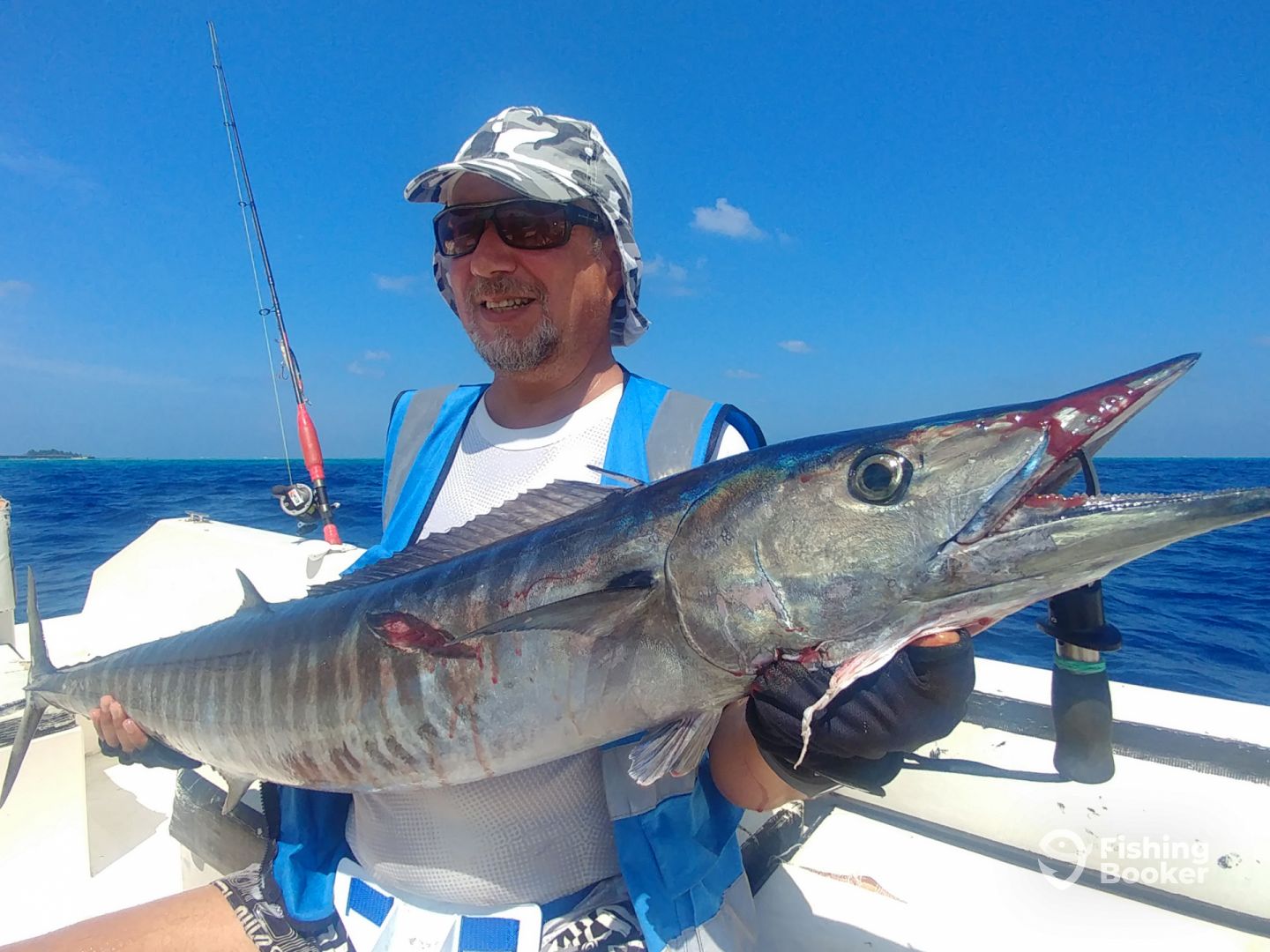 Captain T is always there to help you learn more about fish, show new and traditional fishing techniques, and teach you to recognize what lures will work best. It doesn’t matter if you’re a beginner or you already have lots of fishing experience - there’s always something to learn and a different way of fishing to be seen. 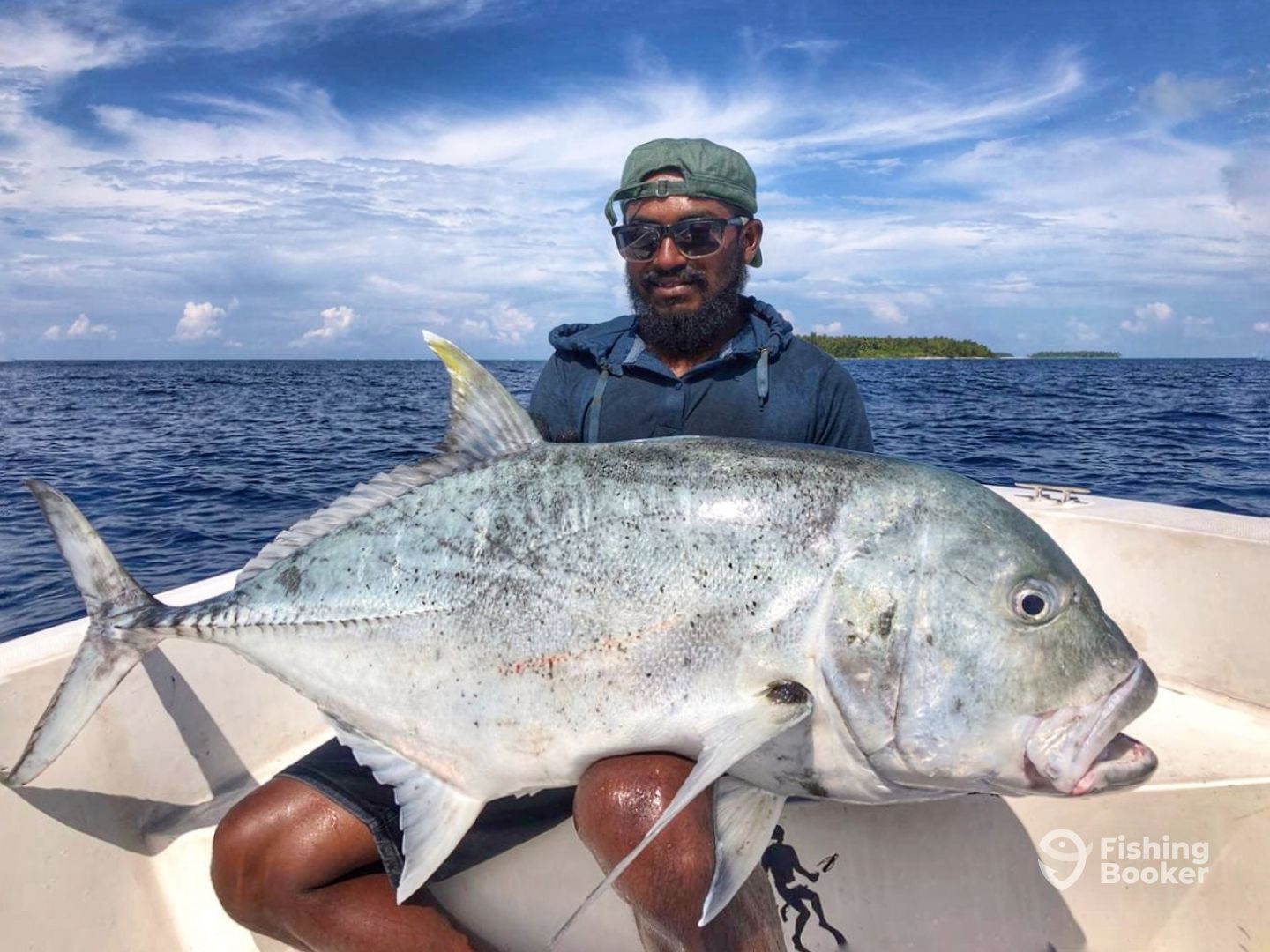 You’ll explore the crystal clear waters of the Indian Ocean aboard a 21’ locally made offshore sport fishing boat. She’s the ideal choice for 4 anglers hoping to fish at the same time. There are plenty of goodies on board including a fighting chair, downriggers, tuna tubes, and a live well. There’s also a portable toilet and a kitchen for you to use.

The Maldives are a go-to destination for those who can’t get enough of big game fishing. Some of the world’s most prestigious prizes call these waters home, including Marlin, Tuna, Sailfish, Wahoo, and Giant Trevally. Whether you’re eager to experience deep sea fishing aboard a traditional dhoni or in style aboard a luxurious yacht, it’s bound to be epic. Spend half a day fishing among the atolls, or come aboard for days on end and explore the deep sea beyond. No matter what bites the bait, you’re sure to get hooked on big game fishing in the Maldives.

When to Go Big Game Fishing

The Maldives see two distinct seasons each year, characterized by some as “wet” season and “dry” season, while others know them as the “northeast monsoon” and the “southwest monsoon.”

The northeast monsoon season (November through March) brings less rain, which is why some consider this to be the local dry season. Anglers enjoy calmer skies and waves at this time of year, along with peaks in populations of Yellowfin Tuna, Wahoo, Mahi Mahi, Sailfish, and Blue and Black Marlin. A variety of other fish stick around in high numbers all year, including Giant Trevally, Skipjack Tuna, Barracuda, Snapper, and Grouper.

During the southwest monsoon, many of these fish feed closer to the water’s surface, which makes them easier to catch. However, strong winds and heavy rainfall prevent anglers from making it to the outer edges of the atolls to fish for them. If you plan on fishing between May and October, be sure to keep an eye on the weather forecast.

Anglers use a variety of techniques while big game fishing in the Maldives. It’s common to troll for Marlin, Tuna, Wahoo, and Sailfish, while many people come here specifically to target GT by popping. Jigging, popping, and even fly fishing are also effective for catching Sailfish, Tuna, Bonito, and Trevally species. A number of local fishing charters also include handline fishing for bottom fish like Snapper and Grouper. In some cases, you may also have the opportunity to try pole and line fishing for Tuna, a traditional method with a bamboo pole and fishing line.

Maldives big game fishing charters include licenses for their customers. They typically include gear, as well, but always confirm this with the captain ahead of time. In some cases, bait is available for an additional charge.

GT is strictly catch and release most of the time, however you may be able to keep some of the other species you catch. Catch and release policies vary widely depending on the charter operator, so be sure to ask about this before your trip.

With no shortage of impressive catches to be had, it’s easy to see why the Maldives have a reputation for some of the world’s finest big game fishing!

Maldives
4.12
Based on 21,036 reviews by FishingBooker anglers 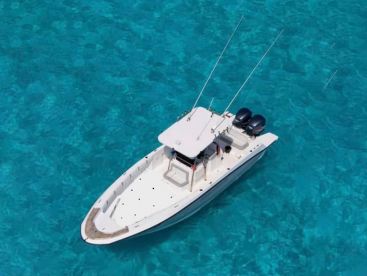 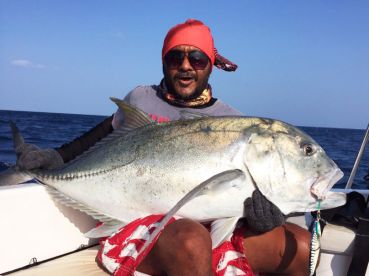 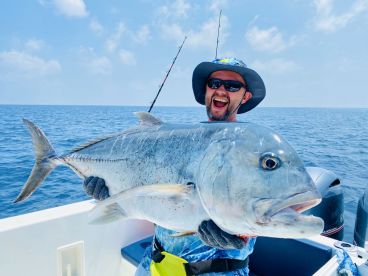 June fishing trip
Zainal M. A. fished with Alpha Royale – Dhebanveli Guesthouse on June 12, 2019
Stick bait for gt no so big Blue for jigging recommended by the captain About 100lb shock leader
Private Charter of Makaira Sport Fishing Boat for 6 hours on 30th Apr 2019
Keith G. L. fished with Makaira Luxury Charters on May 1, 2019
Expect the unexpected fish that will come on to the fishing hook.!
April fishing trip
Apoorva M. fished with Black Pearl Fishing on April 12, 2019
If you are a first-timer, then consider yourself in the safest and best hands. Moosa's patient nature makes him one hell of a teacher/guide. If it's your nth time fishing, then you're still with the best.
Angeln beim Sonnenuntergang
Deeksha M. fished with Black Pearl Fishing on April 11, 2019
Fragen Sie nach Moosa. Er ist geduldig und es hilft, wenn Sie etwas Neues lernen.
Half day with Captain Abdul
Simon W. fished with Silent Hunter on November 27, 2018
As with all fishing, it can be slow but pretty darn good in the Maldives
Full day with Shimal and Nashid
FishingBooker Member fished with Skull Fishing on November 21, 2018
The best time for Fishing i Male is from Jan to March, and try to stay near Vaavu Fulidhoo, a lot of wahoo and Sailfish to be found in the area.
Great experience!
Arto M. fished with Alpha Royale – Dhebanveli Guesthouse on November 8, 2018
Do your research and booking well in advance and make sure the captain knows what kind of fish and fishing you are aiming for.
Full day trip
Fan Z. fished with Alpha Royale – Dhebanveli Guesthouse on January 27, 2018
Make sure the charter can reach the resort or island you are staying at