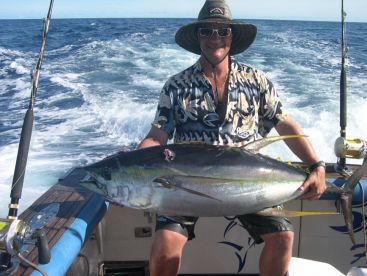 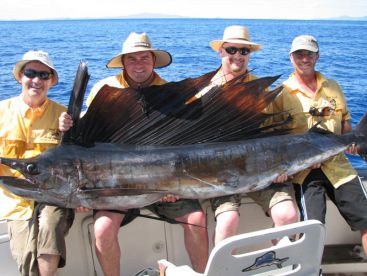 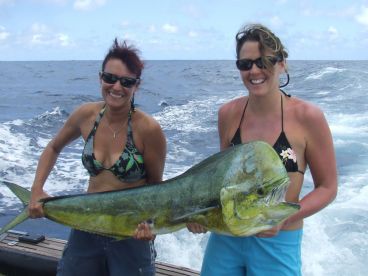 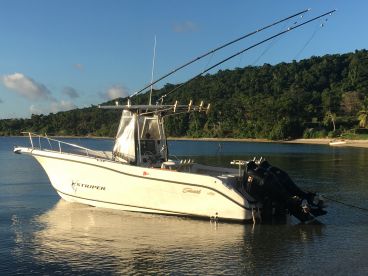 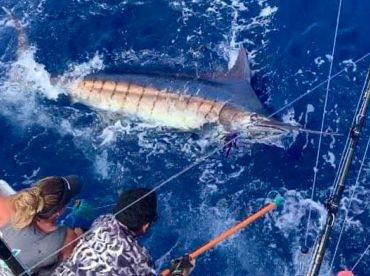 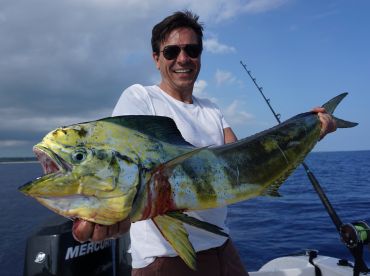 Fishing in Vanuatu is much more than a sport—for many, it’s a way of life. Generations of ni-Vanuatu have thrived on the bounty of the South Pacific, whose fish make for excellent sport as well as table fare. Many infamous names can be found in these waters, such as Marlin, Yellowfin Tuna, and Giant Trevally. These showstoppers have caught the attention of diehard anglers from far and wide, and Vanuatu is quickly turning into one of the world’s premier sport fishing destinations. With world class angling just minutes from the dock, you don’t have to be a seasoned sailor to make the most of local fishing grounds. All it takes is a savvy guide and a little determination!

Vanuatu consists of more than 80 coral and volcanic islands, spanning over 1,300 km in the Pacific Ocean. This smattering of islands is surrounded by steep drop-offs, tall seamounts, and a vast collection of FADs (fish aggregating devices). What does this mean for anglers? A whole lot of big game fishing. Combine all the above with Vanuatu’s subtropical climate and you have a recipe for year-round angling. Simply put, a Vanuatu fishing experience is all about non-stop deep sea fishing.

Common catches include Yellowfin Tuna, Mahi Mahi, Wahoo, and Pacific Sailfish, as well as Blue, Black, and Striped Marlin. Many of these species inhabit the offshore waters year-round, with various peak seasons. If you’re fishing between October and May, you can expect good fishing for Marlin and Yellowfin Tuna. On the other hand, Wahoo and Mahi Mahi are at their best from April through November.

Most local fishing charters are based in the capital city of Port Vila on the island of Efate. From there, it takes just 10-20 minutes to reach some of the area’s prime fishing grounds. Of these, there’s no spot more famous than “Marlin Highway” (also called “Marlin Alley”), a stretch of water running hundreds of miles from north to south. All the big game fish of the South Pacific make an appearance here during peak season! Many Vanuatu fishing charters save the best for last, by trolling near the FADs first and then heading out to this deepwater gold mine.

On most days, you’ll have the opportunity to add some reef fishing into the mix. A steady supply of Barracuda, Bluefin and Giant Trevally, Rainbow Runner, Coral Trout, Red Bass, Green Jobfish, and Dogtooth Tuna swim near the reefs and islands. For first time anglers and families with young children, a quick trip to the reefs is a great introduction to this vast and vibrant fishery.

Flights to Vanuatu bring you to the international airport in Port Vila, on Efate. The yacht club downtown is home to many of the nation’s top fishing charters.

Many of Vanuatu’s northern islands are accessible by small aircraft. Popular destinations outside of Efate include Espiritu Santo, Malekula, Tanna, and Pentecost. If you plan to fish in these places, do your research ahead of time. There are very few charter boats available and you’re not typically welcome to fish from shore wherever you’d like. It’s also wise to consult your doctor ahead of time to see what vaccinations you need. Antimalarial medication is recommended for those traveling north of Efate.

Australian dollars are widely accepted in addition to local currency (Vanuatu Vatu) in major cities like Port Vila and Luganville. You may also have the option to use major credit cards in these cities. If you plan on traveling further from the beaten path, be sure to carry cash (Vatu).

Vanuatu fishing charters provide licenses for their customers. Charter boats based in Port Vila typically provide quality gear, as well. Proper charter boats are few and far between once you leave the capital city, but some local fishermen can be persuaded to take you out--just bring your own tackle.

According to local custom, the catch belongs to the boat and it’s common for the crew to sell most of the fish caught during your trip. Guests often have the choice to take one or two fish home for dinner upon request.

Some species, such as Wahoo, Dogtooth Tuna, and Yellowfin Tuna may be released. Your skipper may also agree to release any billfish you catch, but be sure to discuss this ahead of time so your intentions are clear. Some skippers insist on releasing all billfish to help conservation efforts. This works out just as well for anglers, who have the chance to battle these brutes another day!

You can catch a variety of species on the reefs by casting metal jigs and surface lures, or by trolling with minnow-type diving lures and rigged baits. You’re likely to entice a bite from Barracuda, Coral Trout, Rainbow Runner, Red Bass, and several Trevally species.

Anglers who find themselves in the right place at the right time can also enjoy good shore fishing. You can catch reef fish both large and small while casting a line around here, but make sure you have permission ahead of time. Much of the land belongs to local villages or resorts, and you’ll need to consult with someone before fishing there. In some cases, you might be good to go after striking up a friendly conversation or paying a modest fee. However, your safest bet is always to book a local charter.

Whether you’re heading out with one of the country’s finest sport fishing fleets or casting a few lines on your own, a little fishing in Vanuatu is sure to become one of your favourite memories!

Vanuatu’s big game fishing season is in full swing at the start of the year! Yellowfin Tuna, Blue and Black Marlin, and a host of reef fish are biting vigorously. Just keep an eye on the weather forecast.

It’s the height of hurricane season in Vanuatu, so be sure to check the forecast before heading out. Even a quick trip offshore can produce Tuna, Marlin, Trevally, and a wide variety of reef fish.

True to its reputation, Vanuatu continues to offer superb big game and reef fishing as the year rolls on. Try your luck at landing a 1,000 lb Marlin or see what the reefs have in store.

Hurricane season is coming to a close, but you should still keep an eye on the horizon. As the season changes, so will the fishing, but for now you can still count on Blue Marlin and Yellowfin.

Mahi Mahi is at its peak, which ought to shake things up around here! Fishing for Marlin and Tuna is still excellent, even after their peak seasons have passed.

Sailfish and Wahoo are joining forces with Mahi Mahi to give local anglers a run for their money! Target all these species while they’re at their peak and top it off with a catch from the reefs.

Vanuatu’s wettest and coolest weather sets in during July. The drop in temperature may call for some alterations to your wardrobe, but the fishing isn’t about to change just yet!

You can enjoy lots of variety while billfishing in August, from Sailfish and Swordfish to Striped Marlin as they start to make their entrance off of Vanuatu’s shores.

The coldest weather of the year will soon be behind you, but for now you can keep warm by reeling in some feisty fish like Mahi Mahi, Sailfish, Wahoo, and Striped Marlin!

Blue and Striped Marlin are at their peak this month, along with many other big game fish. Try your luck by the FADs and then head out to Marlin Highway for the cream of the crop!

November is full of Marlin madness! Blue and Black Marlin are at their peak, while a few Striped Marlins can still be found swimming around the coasts of Vanuatu.

December marks the start of hurricane season. Plan your trip accordingly and hire a local skipper for your best shot at landing Yellowfin Tuna, Marlin, and more!

Reviews of Fishing in Vanuatu

Reviews of Fishing in Vanuatu