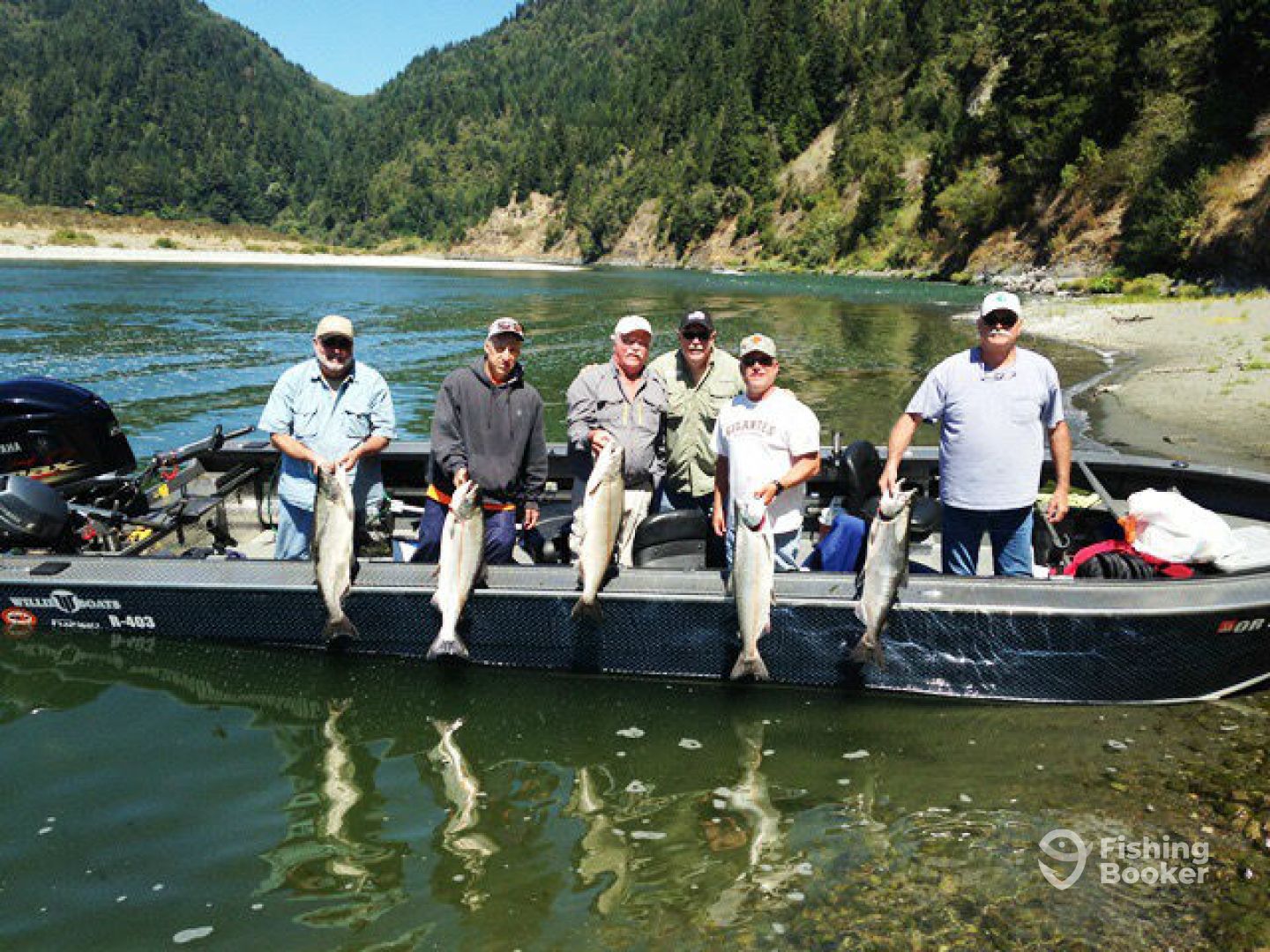 Steve Huber’s Guide Service operates the lower 37 miles of the River. Your trip will begin in Golden Beach, Oregon. Before you make your first cast, Steve will guide you through the basics to help you use the tackle. Then, you will begin your adventure to follow Salmon from the Ocean to the upstream holding waters. 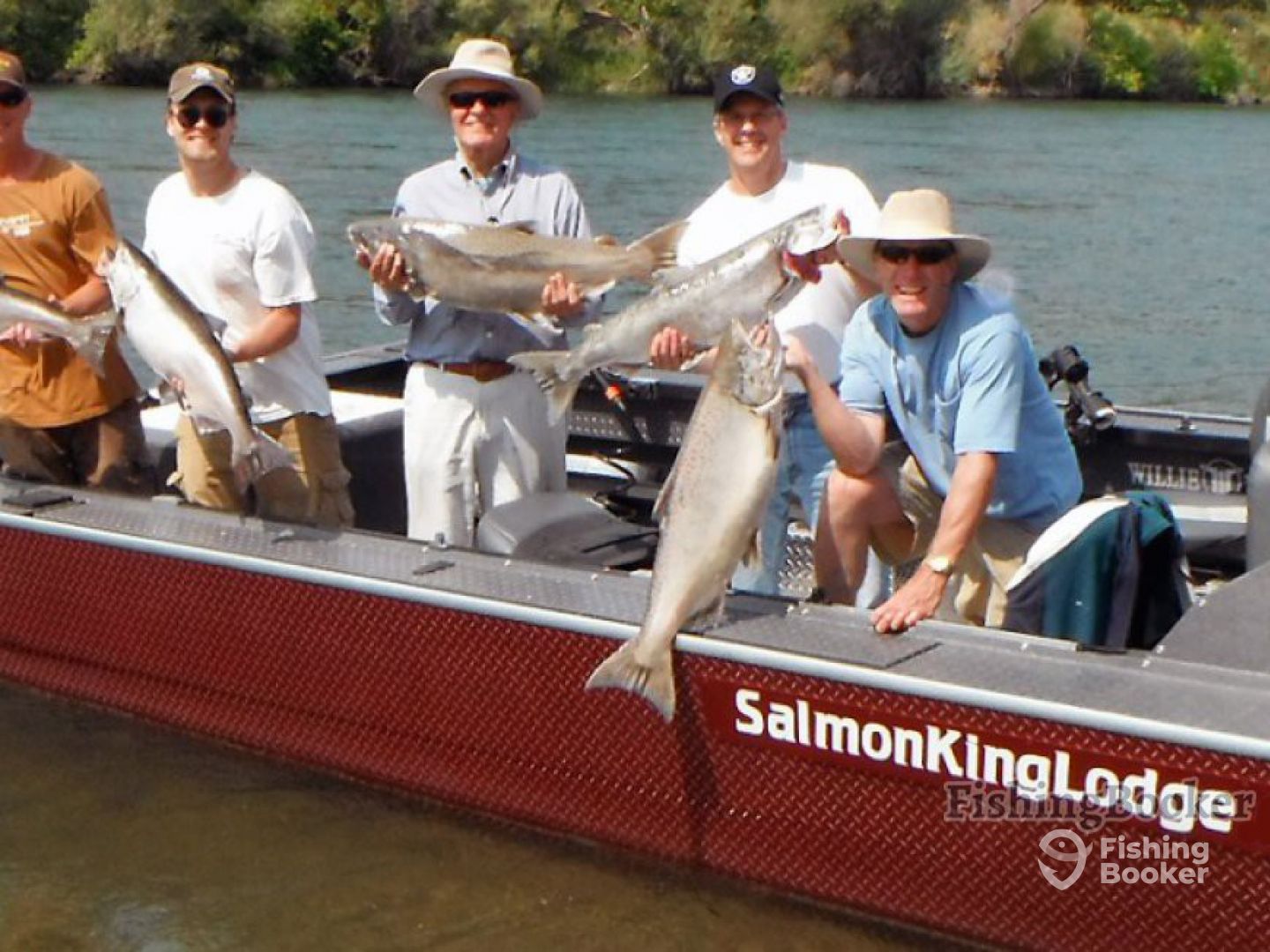 It’s safe to say that Steelhead fishing in the Rogue River is one of a kind. This is the only place in Oregon where you can go after “half-pounders,” (juvenile  Steelhead). What makes them unique is the fact that they come back to the river after being in the ocean for only a few months. Don’t let their nickname discourage you – they don’t actually weigh half a pound, they’re usually around 2 pounds.
Half-pounders start their run in September and swim along the area from Gold Beach to Grants Pass, especially around Agness. October is the peak season and the best way to go after them is by fly fishing. Fall Steelhead may not be big but they’ll hit your bait like a ton of bricks. They’re very strong and make incredible jumps, which is why even very experienced anglers are thrilled to catch them.
In winter, mature Steelhead start their upstream run, which peaks in March. They differ from their summer kinsmen – they are larger (10–16 pounds) and don’t fight as hard. You’ll need a different strategy to catch them, but rest assured a great local guide will show you how.
The local guides usually offer five-hour and eight-hour trips but don’t be surprised when you see a 10-hour trip. Steelhead can put up a great fight and the time passes by very fast!
Fishing for Steelhead in the Rogue River is the best way to explore this beautiful area, learn a few angling tricks, and catch some tasty fish.

Rainbow Trout (Steelhead) fishing in Rogue River varies moderately throughout the year. High season is January to March and December. Low season is May to October. There is no closed season.
Rogue River
4
Based on 19,653 reviews by FishingBooker anglers

2 full day trips 4 people
Bill M. fished with Steve Huber's Guide Service - Rogue on September 6, 2018
just do what the captain instructs you to do ie; if he tells you it's best to keep the rod in the pole holder then do it and don't hold the rod. thats why you loose fish. tip the captain well if you like him and he performs.
Fishing with James Keeling
Stephen H. fished with James Keeling Guide Service on August 3, 2018
I have been fishing Southern Oregan & Northern California rivers for over 20 years and found that each day and each week can be different for size and quanity of fish. I recommend come up with a positive additude and enjoy the surroundings with friends and family.
All day trip with Captian Bill
Richard M. fished with Salmon King Lodge Guide Service on September 10, 2017
Use Salmon King Lodge for your fishing trip. They know the river and their knowledge about the fish and what bait works best are incredible.