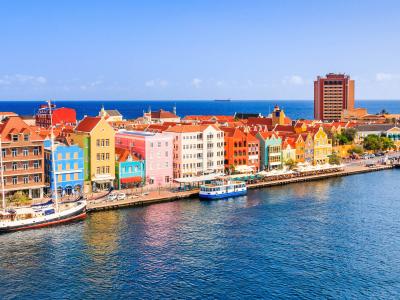 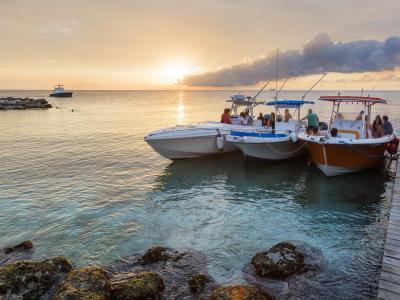 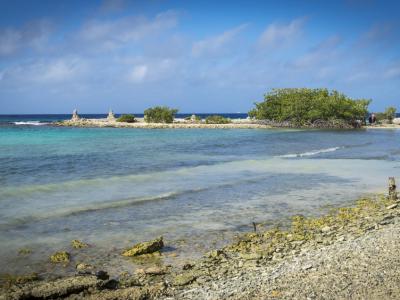 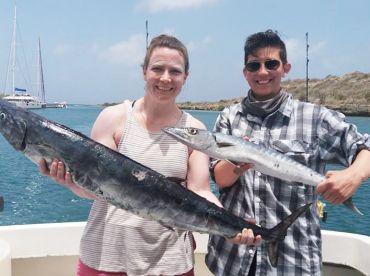 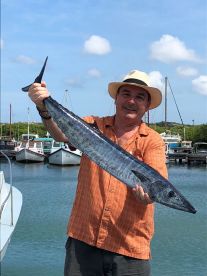 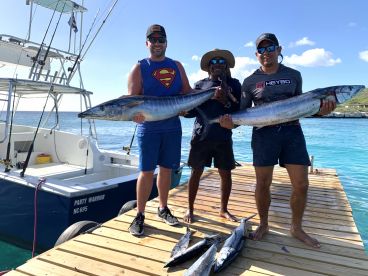 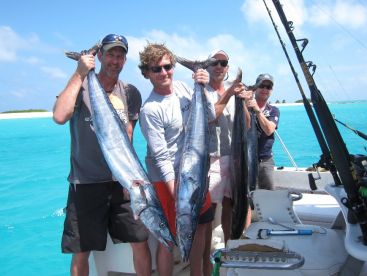 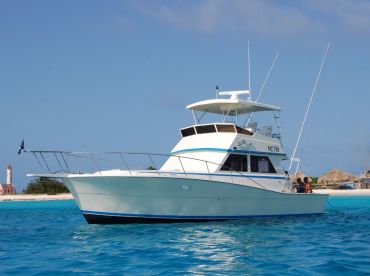 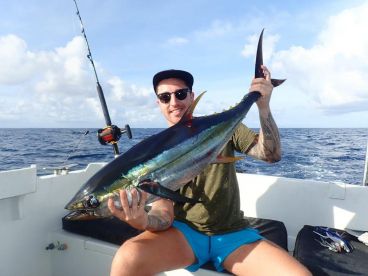 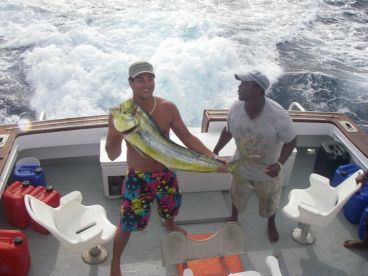 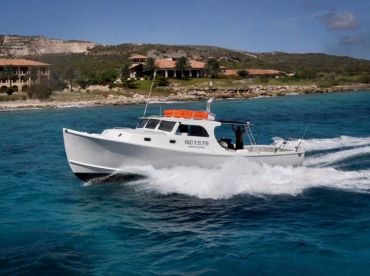 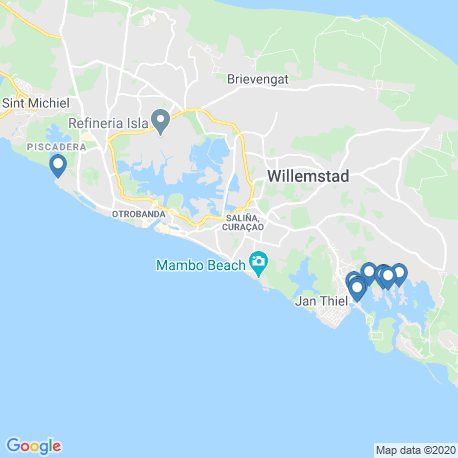 Tucked away just off the coast of Venezuela, the largest of the ABC Islands is often overlooked by fishing fans vacationing in the Caribbean. But ask any angler who’s given Curacao fishing a try, and they will tell tales of year-round Billfish, top-feeding Tuna, and a safe, friendly experience throughout their entire trip. They’re not wrong.

Curacao has been an independent nation since the breakup of the Netherlands Antilles in 2010. It remains strongly affiliated with its former colonial rulers and is still officially a country within the Kingdom of the Netherlands. The island has been described as “Caribbean bliss with a European twist.” You can see this aboard Curacao fishing charters just as easily as in the Dutch architecture of the capital. This is one of the safest countries in the Caribbean and pretty much everyone speaks English, Spanish, Dutch, and the local Papiamento.
There’s a bigger emphasis on conservation here than elsewhere in the Caribbean. All Billfish are released and the country’s commercial fleets comply to European standards. The fishing here is just too good to risk ruining. What makes Curacao’s sportfishing so great? For one thing, year-round catches of Marlin and Tuna! The island also enjoys instant drop-off into seriously deep waters, so you can catch these monsters just a mile from land in places.
Curacao also misses the main hurricane belt, which makes the late summer months unpredictable for countries further north. Somehow, all this has passed the big sportfishing crowds by so far, and only a dozen or so charters operate island-wide. This is bound to change, so you could be one of those lucky anglers who fished here before the crowds arrived!

This up-and-coming fishing spot has around a dozen main target species to choose from. But if it lacks anything in variety, it more than makes up for in sheer quantity of each local gamefish. Here are the main catches on Curacao fishing trips.

Blue Marlin, White Marlin, and Sailfish are caught every day of the year and swarm the island in fall and winter. If you miss the peak Billfish season, don’t worry, that just means it’s Tuna season instead! Yellowfin Tuna flock to Curacao throughout spring and early summer, and there are always plenty of Albacore running alongside them.
The local favorite has to be Wahoo, though. Known locally as “Mula,” Curacao’s Wahoo are as popular to fight as they are to eat . They reach good sizes and large numbers, especially in the winter. Mahi Mahi are another important gamefish among Curacao fishing enthusiasts. Twenty-strong packs of “Druda”  show up January-May. They're one of the island’s only seasonal fish, making them even more popular when they’re in town.

Curacao’s reefs are more frequented by divers than by anglers, but they’re still great for some family fun. Barracuda are the top catch, alongside Rainbow Runner and various Snappers and Groupers. The awesome thing about Curacao’s reefs is that levels of Ciguatera poisoning are extremely low, meaning Barracuda is officially on the menu!

An instant drop-off means a lack of inshore fisheries. Or so you’d think! Curacao’s flats fishing is still in its infancy, but stories of murky bays full to bursting with monster Tarpon keep cropping up. This is definitely one to watch as the island’s sportfishing scene develops–you heard it here first!

Curacao charter boats all leave from around Willemstad, on the island’s southern shore. They either launch from Jan Thiel in the east, or from Piscadera Bay, just the other side of the city. There is such amazing fishing right on the city’s doorstep that you don’t need to go far to find great deep sea action.
If you’re looking to take things to the next level, chances are you’ll head to Klein Curacao. “Little” Curacao is a tiny, uninhabited islet 20 miles southeast of Willemstad. It sits in 1,500 feet of water and offers some of the best big game fishing in the country. The only place that tops it is the Curacao Ridge, an underwater mountain range some 60 miles northeast of Curacao, which is a go-to destination during the annual Blue Marlin Release Tournament.

You don’t need a fishing license in Curacao, whether you’re wetting a line on a charter or trying your luck from shore. As a rule, the crew keeps most of the catch at the end of your trip. Don’t worry, you’ll be given more than enough to keep you full during your stay! Catch and release is mandatory on all Billfish.

Curacao’s sportfishing fleet is incredibly varied considering its size. You can find anything from cheap-and-cheerful locally-built boats to sumptuously luxurious sportfishers, each with a price tag to match. If you’re just after some fun in the sun and a few fish to show for it, the smaller vessels will probably do just fine. But if you want to get the most out of these waters, it really pays to invest in a more professional outfit.
Half day trips range anywhere from $450-750, depending on the size of the boat and the quality of the equipment. Full days usually range between $750 and $900. If you’re up for going all out, many charters run extended trips lasting 12 hours or more. On the other end of the scale, you can pick up a spot on a shared trip for $100-150.

Flights to Curacao’s Hato International Airport cost a lot less than you’d think if you time your trip right. Visit in the fall, during peak Marlin season, and you can fly from cities across the US for under $500. Flights from Amsterdam or London aren’t much more, either. Once you get to town, the most common ways for tourists to explore are by taxi or rental car. You can also take buses all around Curacao. At just 180 miles long, Curacao is easy to navigate once you’ve arrived.
Curacao has all the makings of the perfect island getaway, with great weather, white sandy beaches, and warm, crystal-clear waters. Throw in year-round catches of all your favorite big game species and really have to wonder why you haven’t gone there yet!

Kick off the year in an explosion of color with the Curacao Carnival. Otherwise, hit the water and enjoy incredible Wahoo, Marlin, and Tuna fishing. No wonder this is peak season!

You can hook into all of Curacao’s many fish species this time of year, with not a cloud in sight to put a dampener on your trip. Forget the February blues on your own dream island getaway!

Competitive anglers take part in Curacao Yacht Club’s Blue Marlin Release Tournament each March, as they have been doing for over half a century! Book your charter well in advance this time of year.

Things don’t get any more picturesque than Curacao in April. Sail ships arrive from around the Caribbean to take part in the Sami Sail Regatta, as anglers enjoy peak Mahi Mahi and Yellowfin season.

Take to the water to battle Yellowfin Tuna, Mahi Mahi, Wahoo, and more, or visit the Curacao Dive Festival to celebrate life beneath the waves and learn about Curacao’s unique aquaculture.

The battle rages on between angler and fish, as Yellowfin Tuna demolish topwater baits and lures. The Mahi Mahi have all moved on, but everything else is still biting hard.

The Marlin bite starts to pick up in July, just as Yellowfin high season hits its grand finale. Closer to shore, Barracuda are on fire, along with various bottom fish. There’s never a bad time to fish in Curacao!

You can get in great catches across the board this time of year. Otherwise, take a break from the reel-screaming action to hear something almost as exciting at the North Sea Jazz Festival.

Billfish season shows no sign of stopping in October, with both Blue and White Marlin going crazy around Klein Curacao. Sailfish are also on form, so why not try for a slam?

November is one of the wettest months of the year on average, but that doesn’t put out the fire in the Marlin bite! Don’t let it put you off, either. The fishing is just too good to miss.

Fancy an escape from the crowds, the cold, and the extended family? Head on down to Willemstad to enjoy warm weather and excellent angling for Marlin, Mahi Mahi, Wahoo, and more instead!

Reviews of Fishing in Curacao

Reviews of Fishing in Curacao

Open Charter with Kenny
Jeff D. fished with Fish Charter Curacao - Plan B on February 19, 2019
Come prepared for rough seas and you won't be disappointed
Half day AM with Derik
Jason J. fished with Smallfield Adventures– Party Hooker on July 3, 2018
Be prepared for waves and plan accordingly. Don't expect to catch a ton, it is not like on TV, but the potential is definitely there...on a positive note, you only need to go about 1/2 mile out to get into the deep water.
Excellent Trip
Antoun A. K. fished with Desperado Boat Trips Curacao on June 27, 2018
Don’t forget the sun screen! Don’t expect to keep the catch!
8 hour trip with Cpt Dylan and Carlos
Drew S. fished with Desperado Boat Trips Curacao on May 28, 2018
When fishing in Curacao be aware that the stiff trade winds create rough seas, the fish are big and put up a good fight but fishing here is not for the weak stomached, and I would not recommend for people new to deep sea fishing.
Half day trip on the papa go with captain Gordo
Matthew P. fished with Fish Curacao on Papucho IV on February 28, 2017
Have a good time and remember fishing is called fishing for a reason.

FishingBooker has a Shopper Approved rating of 4.8/5 based on 19468 ratings and reviews