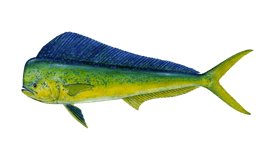 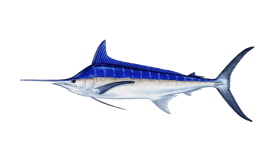 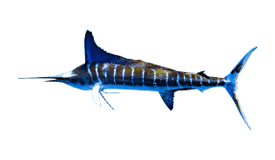 Fishing is a fickle game at the best of times. But at present the fishing and the currents seem more fickle than normal. I went out on several days last week and conditions changed each day.  The end result was a couple of good days and a couple of bad ones.

After the first day, last Tuesday,  when the water was relatively cool the current from the South not to mention quite rough, everything changed. To my great surprise when we went out on Wednesday the temperature was up and the colour what we like to see unfortunately the fish hadn’t arrived yet.

On Thursday I had Robert and his friend from California. There were reports of some Yellowfin out wide and the occasional Blue Marlin. We were on the thousand fathom line East of Browns heading into what looked like a storm front with a couple of water spouts spooking about when we took the strike. I was sure it was a Blue , a huge hole inn the water and a screaming run. But after a short time it became apparent we were into a good sized Yellowfin which later weighed in at 65kg.  During the fight the weather front hit us and the rain was so heavy I could only just see the front of the boat. Robert was stoked, very wet and basically stuffed.

Saturday was the day, perfect conditions weatherwise but the water temperature had dropped a half a degree from Thursday.  I put the lures in just short of the shelf and started heading out. I wasn’t long before I marked a couple of fish on a bait school . As I looked back to check the lures the rigger went off and a good sized Striped Marlin took to the air. After a short but spectacular fight we had the fish along side and Howie, my deckie, released the fish after it gave him a good workout on the leader.

So the lures went back out and within minutes we had another Stripy hooked up and jumping in our wake. While the guys were clearing the other lines another Stripy came in and had a shot but it was only a half hearted effort.  That was it for the day. There was quite a bit of action further South with Blue Marlin and Yellowfin but we had no other takers.

In general it is looking good off Sydney this week-end both weatherwise and for the Sydney Game Fishing Club’s ‘Peter Goadby Memorial Tournament   with $50,000.00 up for grabs.

Book your trip with Ambition Charters

Watsons Bay NS, Australia  •  Member since November 2016
I have been a fisherman since I was a kid and developed a love for the seas and all that lives in and on the oceans. It is my passion...I have been a member of the Sydney Game Fishing Club for over 30 years and have fished competitively along the East Coast of NSW from Bermagui to Ballina for all the Game fish species found along our coast...I started a Chartering business in the year 2000
Response time: 3 hours
Response rate: 100%
Trust

9 reviews
Ambition Charters is run by one of the most experienced captains in the Sydney area - Captain Ivan. He has been fishing for over 50 years now, and many of those years have been spent with the Sydney Game Fishing Club tournament fishing for big game fish,
Book Now

January 19, 2020
I along with Ron Kovacs and Lee Cheesman took Ambition up to Port Stephens last Saturday. And what a trip it was. It poured the whole way up…