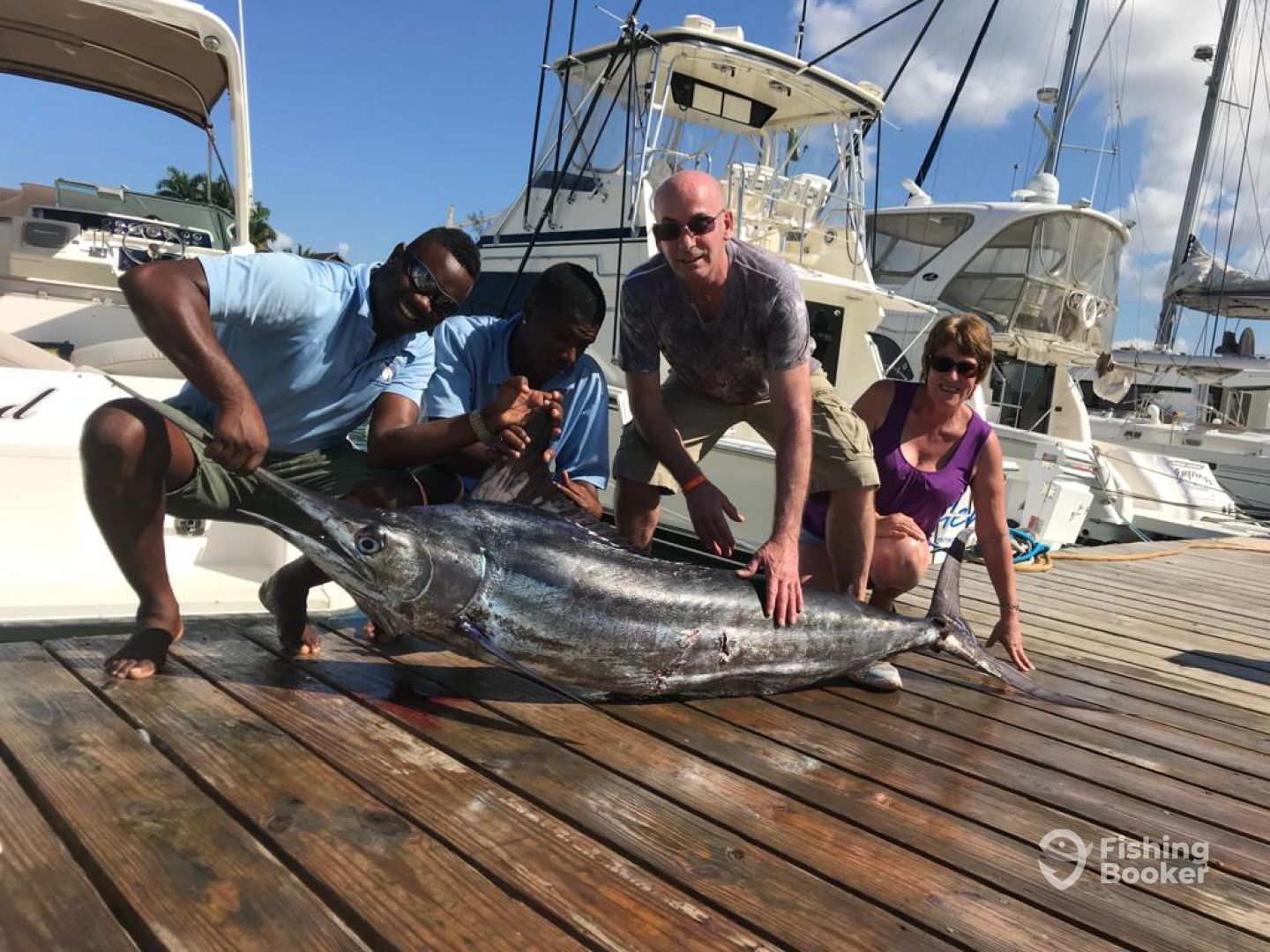 On the trip of your choosing, you will be focusing on catching the fish of your dream nearshore, offshore, or on the reefs. If you decide to go offshore, you will head 7-10 miles out to target Mahi Mahi, Yellowfin Tuna, Sailfish, and White and Blue Marlins. Species such as Great Barracuda, Goliath Grouper, Red Snapper, Wahoo, and plenty more. Reel Magic Sports Fishing uses electric reels for deep drop fishing. 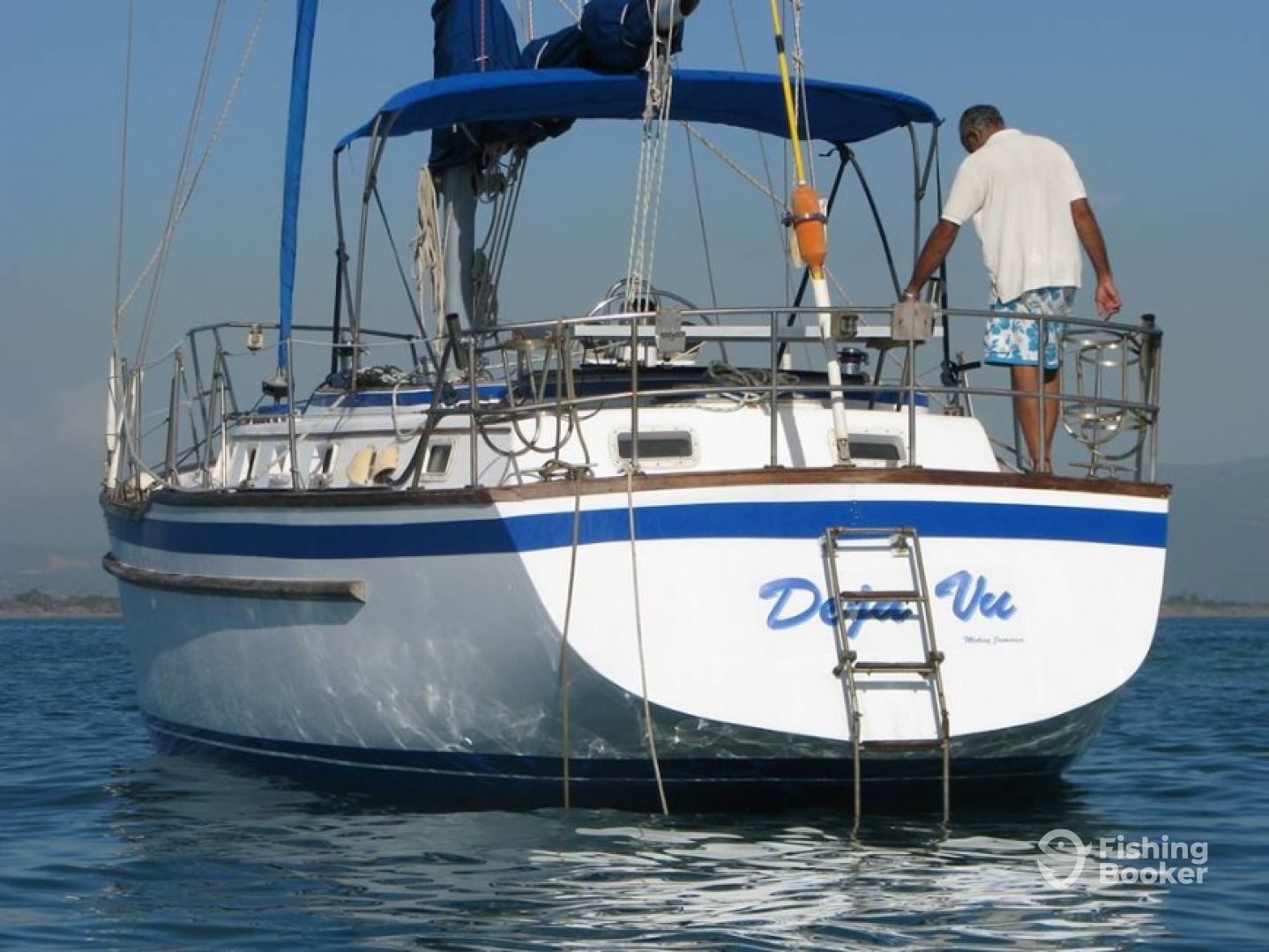 Fishing and sailing will take place aboard the Deja Vu, which is a 40’ Endeavour sloop rigged sailboat. It was built in Largo, Florida and can sleep 6–8 guests in 3 separate cabins. This vessel is powered by a 56 HP Yanmar engine which is maintained continuously. It contains a GPS and a fishfinder, a dual emergency VHF radio, and an AIS. 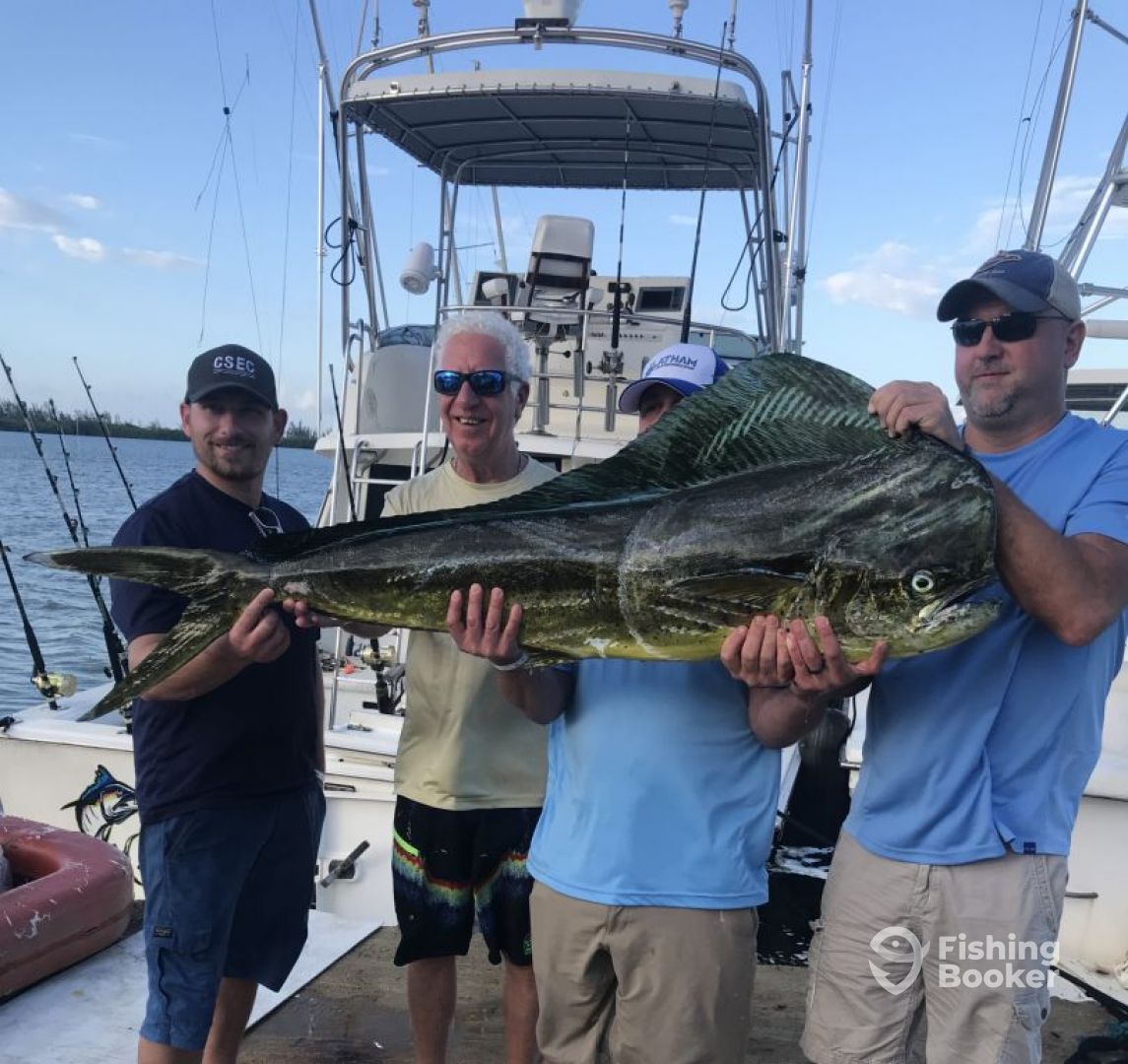 Hop on board his 35’ Cabo boat, perfect for groups of 6 anglers. This boat is decked out with full safety and navigational equipment, so you can fish with complete peace of mind. There is a restroom for your comfort and a huge deck to reel in your catch. There is an enclosed cabin if you need to get out of the sun and seating to relax.

You really don’t need to travel far to enjoy the best deep sea fishing Montego Bay has to offer. The ocean floor starts to drop as soon as you leave the beach and you can often find yourself fishing in a thousand feet of water less than half a mile from land. This makes for dream bluewater fishing, with Blue and White Marlin, Wahoo, Mahi Mahi, Sailfish, and Yellowfin Tuna all found within swimming distance of the shore.
Montego Bay Fishing Seasons
All the fish you can target out of Montego beach are theoretically present all year round. Tragically, decades of overfishing has reduced the country’s fish stock and these days you need to time your trip to be in with the best chance of catching a specific species.
Blue Marlin peak from August to October, swarming the surrounding waters to breed. The biggest fish are often caught earlier in the summer, though, with females up to 300 pounds turning up most regularly in June.
The best time to target White Marlin is in February and March - a short season, but a sweet one nonetheless, with plenty of action and none of the high humidity the Blue Marlin force you to endure. The Mahi Mahi are quick on their heels, rolling into town in early March to make sure no-one gets bored. They are joined by Yellowfin Tuna and Wahoo, who are most active in the spring and fall as they migrate past the island.
To sum things up, show up anytime between January and November and you’ll be in with a chance of landing something special, although the best variety of species is found in the fall.
What can I expect from a deep sea fishing trip?
There’s no point beating about the bush - most Montego Bay deep sea fishing charters are pretty basic. Unless you book with one of the more established and professional outfits you will spend your entire trip trolling no matter what the bite is like. There are some really great charter boats around, though, and they are well worth the extra money if you actually want to catch some big fish.
How long should I book for?
Because the blue waters are so close, four hours on the water equals three hours of fishing, even if you stop to catch some bait.  This means you can easily get in some awesome big game action on a half day, especially in the fall when the fishing is at its best.
If you are in town in June and looking to bring in a prize Blue, the extra time is essential as they are much less frequent. This will also allow you to move out past the traditional waters in search of more healthy fishing grounds, increasing your chances of bagging a winner.
How much will it cost?
A half day trip can cost as little as $500, but honestly, do yourself a favor and change up to one of the proper sportfishing boats. They may cost half as much again but they are ten times as good, with modern fishing equipment and skilled crews who offer more than just a booze cruise.
Full day trips generally cost twice as much as half days and will give you enough time to catch some good fish whatever boat you choose. The bigger, professional boats will make for a more special day and much better fishing. On the other hand, if all you want is a fun day on the water and a chance of catching some big fish, the cheap-and-cheerful center consoles will happily oblige and usually come with a decent supply of local beer, too.
Montego Bay
4.18
Based on 21,081 reviews by FishingBooker anglers