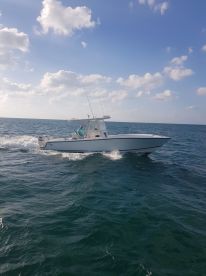 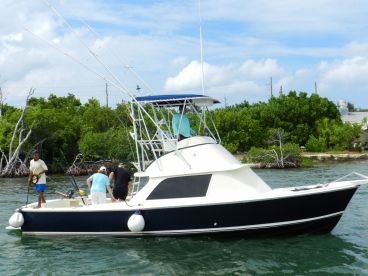 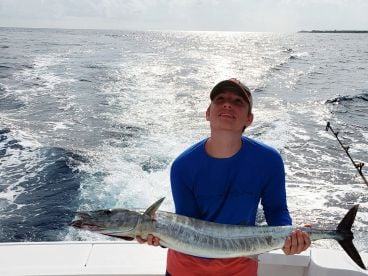 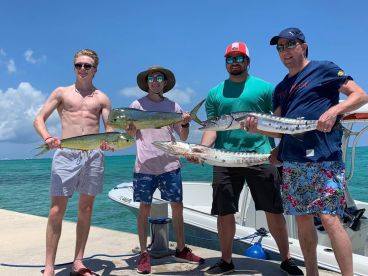 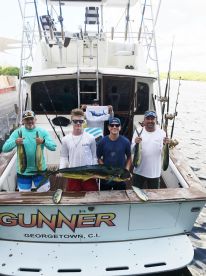 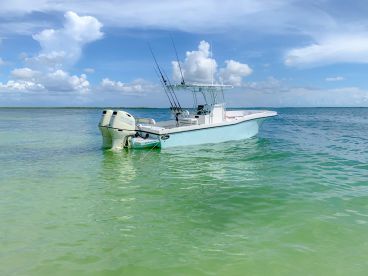 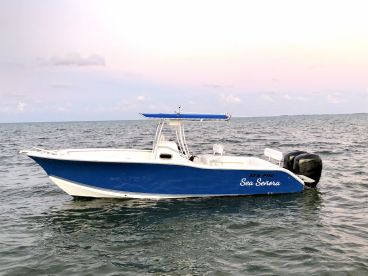 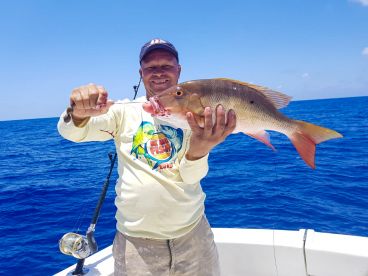 You will find anglers in Grand Cayman fishing anywhere between the deep sea and shore. This island is the largest of the Cayman islands, which are all peaks in one massive underwater ridge in the western Caribbean Sea. A popular tourist destination, Grand Cayman is home to the Cayman Islands National Museum, the ruins of Fort George, sandy beaches, and vibrant coral reefs. It is also home to some of the most sought-after prizes in sport fishing, including Blue Marlin, Tarpon, and Bonefish.

Anglers looking for big game fish love deep sea fishing Grand Cayman. What makes this sport so magnificent here is the topography below the waves. Merely one quarter of a mile from shore, the ocean depths extend beyond 2,000 feet. Just a little ways beyond this drop off lies the Cayman trench, where the depths plummet again--to more than 20,000 feet. Naturally, these deep waters are teeming with baitfish and predators such as Marlin, Yellowfin Tuna, Mahi Mahi, and Wahoo.

Many Grand Cayman fishing charters offer half day deep sea fishing trips, giving you a chance to chase after these big game fish in a matter of several hours. The Blue Marlin here may not be the biggest in the world (100-150 lbs), but they are always biting, and you don’t need to travel far to find them. White Marlin are caught here on occasion, as well.

For an equally exciting adventure, some anglers spend their time in Grand Cayman fishing the flats instead. These shallow waters are home to Tarpon, Permit, Barracuda, Pompano, Snook, Jacks, and the legendary Bonefish. Some inshore fishing charters even offer guided wade fishing and shore fishing to target these species. Many anglers enjoy fly fishing Grand Cayman for the same fish, as well.

Reef fishing in Grand Cayman also presents many opportunities near shore. The calm waters surrounding these reefs are ideal for families and first time anglers who are eager to reel in a colorful surprise. You might land Yellowtail Snapper, Mutton Snapper, Jack Crevalle, Bar Jack, Almaco Jack, Porgy, Blue Runner (“Fry Jack”), and Grouper on occasion.

No fishing license is required for recreational fishing in Grand Cayman. Anglers fishing from shore must practice catch and release (a permit is required for those who plan to keep any fish caught from shore). Please note that shore fishing is prohibited in some areas.

Nassau Grouper may not be taken from the designated Grouper Spawning areas at any time of year. Only specimens 12 inches or larger may be removed from the sea.

You can enjoy deep sea fishing Grand Cayman year-round. Blue Marlin and Mahi Mahi never stop biting. The best time to target Wahoo is from November through March (sometimes as late as July), while Yellowfin Tuna tend to peak from March to June. You may have luck landing a Sailfish between June and September, but this is rare.

Most fish near the reefs can be caught year-round as well, including Snapper, Jacks, and the rare Grouper. You can target these species with both natural and artificial baits. Local anglers recommend natural baits, such as Squid, small Fry, or pieces of Conch. Most reef fishing is catch and release due to conservation efforts, however, it is acceptable to keep a few fish to eat.

Flats fishing is done with light tackle, either from a skiff or by wade fishing. The most prestigious species to target include Bonefish, Tarpon, and Permit (a “grand slam” when you manage to catch all three in one day). The Bonefish in Grand Cayman often grow larger than average (up to 8 lbs) and tend to be more aggressive than Bonefish in other areas.

Many anglers enjoy shore fishing for small Tarpon (4-5lbs) in landlocked Brackish waters and canals. You can also fish for Barracuda, Permit, Pompano, and Bonefish from shore (catch and release only) using light tackle. You can catch most of Grand Cayman’s inshore species on fly, as well. Fly fishing Grand Cayman is popular, but very few guides provide fly fishing equipment. Anglers intent on fly fishing the flats and shorelines are encouraged to bring their own equipment.

A number of Grand Cayman fishing charters offer kayak fishing. These trips could take you anywhere from the flats to the nearshore reefs, or even into the deep sea. Kayak fishing is generally recommended for those who have previous kayaking experience.

Grand Cayman
4.25
Based on 19163 reviews by FishingBooker anglers

Even in the dead of winter, you can fish offshore for Blue Marlin, Wahoo, Mahi Mahi, Yellowfin Tuna, and Barracuda. The seasons for Lobster and Conch are open.

You can continue fishing for Lobster, Conch, Marlin, Barracuda, and much more. Mahi Mahi are entering their peak season. Closer to shore you’ll have success fishing for Mutton Snapper, Jacks, and more.

Lobster season is closed. Meanwhile, Yellowfin Tuna are entering their peak season offshore. Inshore you are more likely to catch Permit and Bonefish than in previous months.

Deep sea fishing in Grand Cayman is at its height, with all the big game species biting. You can catch Blue Marlin, Yellowfin Tuna, Wahoo, and Mahi Mahi. Inshore you can target Tarpon, Permit, Snook, and more.

Conch season is closed. You can continue to enjoy great big game fishing, with the possibility of catching a Sailfish. Snapper, Jack Crevalle, and Grouper are all biting near the reefs.

Yellowfin Tuna’s peak season is coming to a close. Other big game fish will keep biting vigorously for several months. Your chances of catching Snook, Tarpon, and Permit inshore are good.

The peak season for Wahoo will be coming to a close soon. You can continue to count on Blue Marlin, Mahi Mahi, and Barracuda. Reef fishing continues to be as good as ever.

You should have great success fishing for Tarpon, Snook, and Permit inshore. The possibility of reeling in the odd Sailfish offshore still lingers. Reef fishing and deep sea fishing are promising, as usual.

Bonefish are making a come-back, giving you a chance to go for a “grand slam” if you manage to reel in Tarpon and Permit too. You can chase Marlin and other big game fish to earn some bragging rights offshore.

At this time of year you can expect good fishing all around, in the deep sea and inshore. Fish the flats for Jacks, Tarpon, Permit, Snook, and Bonefish or head offshore in search of Marlin and more.

Wahoo and Yellowfin Tuna are back in season! You can add these to the list while you hunt for Marlin. Conch season is open. You can continue to enjoy great fishing on the flats.

Lobster season is open. You can enjoy fishing for Wahoo, Yellowfin Tuna, and Blue Marlin offshore. Reef fishing is still promising, as well. Inshore you can target Mutton Snapper, Jacks, Barracuda, and more.

Reviews of Fishing in Grand Cayman 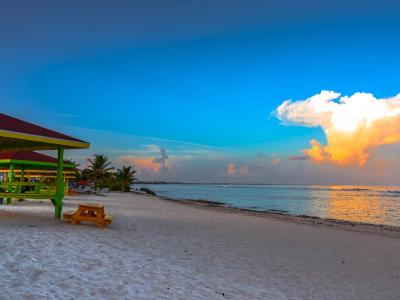 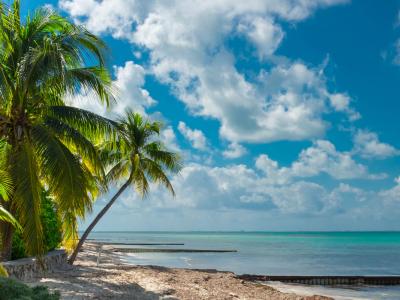 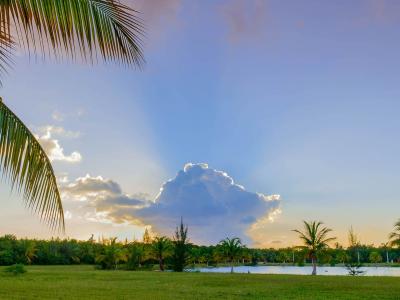 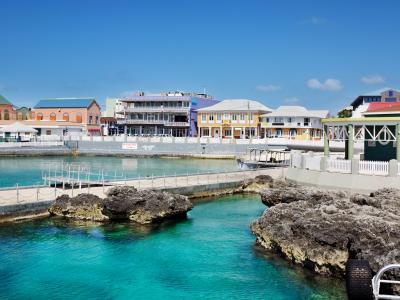 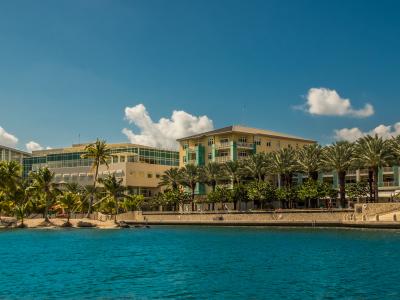 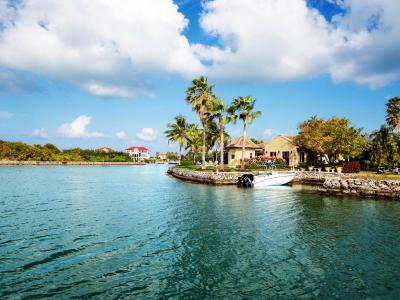