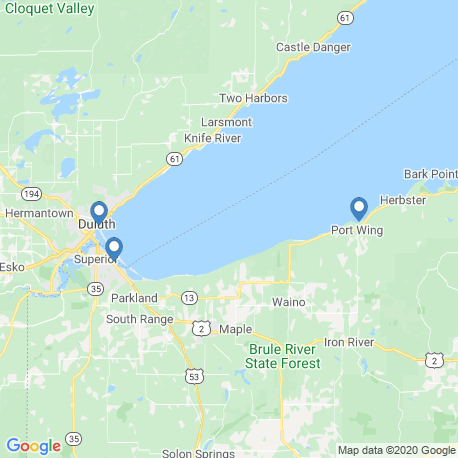 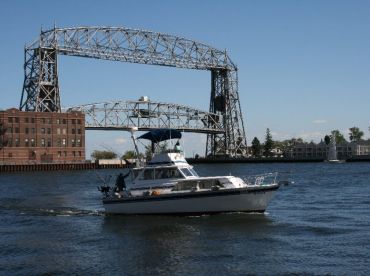 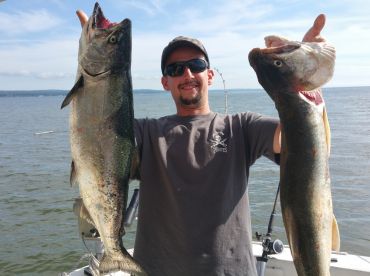 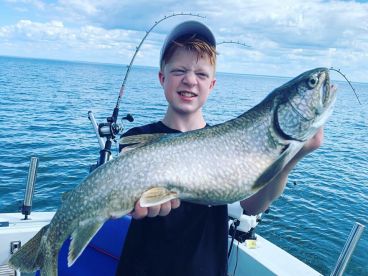 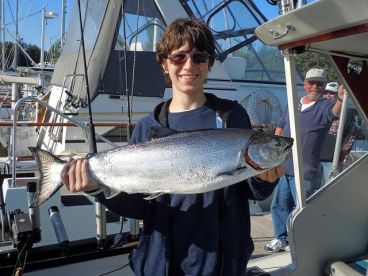 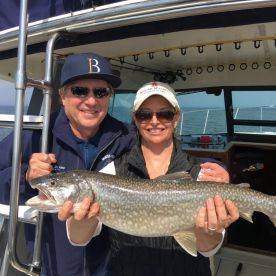 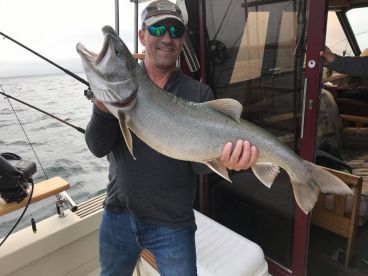 I'd Rather Be Fishing Charters 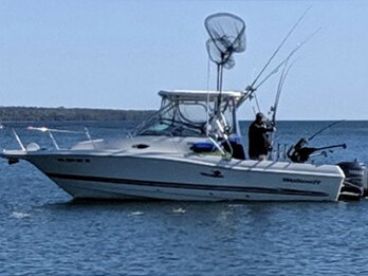 Charter Fishing in Duluth, Minnesota, is a favorite pastime for literally hundreds of captains. And we’re not surprised - Duluth sits at the western end of Lake Superior. Fishing in Duluth connects anglers from all over the world with Salmon, Trout, Walleye, and what not. Afoot or afloat, fishermen seek their own share of that fantastic fishery.

The mighty Lake Superior is home to about 80 species of fish. It is also the clearest and cleanest of all the Great Lakes. The name ‘Superior’ refers to the lake’s size, and it’s a true giant. Just think of all the potential catches that are waiting for you there!

Duluth is a historic port, carved into the cliffs of the Sawtooth Mountain. Duluth’s share of Lake Superior is home to Coho Salmon, Chinook Salmon, Lake Trout, Walleye, and Musky. The presence of these species is due to the St. Louis River, which drains into the lake.

The clear blue waters of Lake Superior, the St. Louis River and St. Louis Bay offer a robust fishing season. It only slows down for the winter months, but the rest of the year is all about a lot of action.

Both Lake Superior fishing charters and guided trips on the St. Louis River are in the must-visit list. A five-hour adventure on the lake would cost you and your buddy about $300-400. A full-day getaway would definitely give you more chances to catch the limits of trophies. Add $100-$150 for an eight-hour charter.

Where to fish in Duluth

Lake Superior is more like a rolling inland sea than a lake. Just determine which species you are after and head to the lake in any month from early spring to late fall. The prime time for Lake Superior fishing is May through October when literally all the superstars are biting. But if you’d like to spice up your fishing adventure even more, go out for Kamloops Rainbow Trout. They can be caught along the north shore even in November and be the highlight of your season.

Salmon fishing in Duluth has gained an excellent and well-deserved reputation. The ferocious fighters Chinooks can add excitement to any trip. The action is close to shore early in the season only to progress further offshore and come back again in early fall. Trollers usually search for their Salmon boys over 60 ft of water.

On the Trout front, fishing is most active as the surface temperature rises in May until the spawning begins in October. Lakers can be taken on stickbaits, which should preferably stand out with size and bright colors. Trolling is normally done in around the plumes (rising cylinders of hot mantle rock). The most common catches are 5 lb, but a 30 lb catch can also happen if you know where to look. The most Trout-friendly surface temperatures are normally up to 46 degrees. Guess what - the majority of Lake Superior Trout are concentrated right in Duluth!

If you are a Walleye angler, get ready for a fantastic trip. These fish will send your pulse racing during the warmer months of summer. Lake Superior Walleye fishing charters are most productive in late spring and early summer, as the water temperature increases.

The combination of bright-colored spinners and nightcrawlers is the local angler’s go-to bait. Just like with Salmon and Trout, Walleye can be targeted by trolling. Vertical jigging is also popular when fishing those big open waters. The good thing is that you’re allowed to have two lines at a time - more time catching!

First of all, Fishing in Duluth is not limited to Lake Superior only, however giant and fantastic it might be. There is something else that’s equally exciting - St. Louis River and Bay. The River’s headquarters is near Hoyt Lakes, from where it winds southward, passing through the scenic rock cliffs to run into the lake. Finally, it reaches Duluth Harbor, the largest shipping port of the Great Lake, where the river and the lake combine.

St. Louis River fishing trips will suit two types of anglers best. Those who are intimidated by Lake Superior and those who simply can’t wait until next season. Also, when it’s windy around Duluth and it’s not safe enough to go out to the Lake, head to the River and the bay area.

Even though the river’s fishing options abound, Walleye are the local favorites. They are both lake-run and resident and are typically caught in shallow waters up to 15 feet deep. Search near weed beds, flats, and underwater rock structures. Walleye feed on mostly shiners and perch. On your day out, you will most likely be trolling shallow-running crankbaits and crawler harnesses.

Before the St. Louis River season begins in mid-May, Walleye migrate upstream. That’s a signal for local guides to come get their healthy dose of the ‘ol' glass eyes’. When Walleye are done chilling in Lake Superior, they move back in July as the water warms up.

The St. Louis estuary’s flats and slightly deeper areas hold a nice population of Crappie. Early June is their spawning time, which especially excites Crappie-fishermen. Their target moves to 2 feet of water around woody covers. All it takes is to use a minnow on a plain hook. Fishing for Crappie in St. Louis River is not at all hard, which makes it especially great for kids fishing trips.

There is hardly a better way to learn the ropes than booking a trip with a local captain. There are so many fine boats in Duluth, waiting to take you and your buddies on a trip of a lifetime!

How to prepare for your trip

In order to fish the Minnesota’s waters, both Lake Superior and its tributaries, you will need to have a valid fishing license with a necessary stamp. Keep in mind that you will need to bring appropriate clothes with you, along with something to eat and drink. All the fishing equipment is usually supplied by your guides and captains.

Duluth
4.1
Based on 19163 reviews by FishingBooker anglers

Even if it’s cold outside, there is nothing better than fishing right now. Go get a healthy dose of Walleye on Lake Superior’s tributaries. Look for any river or small lake that’s frozen.

The Walleye scene under the ice is what you should be exploring on a late afternoon. The St. Louis River is in solid shape. You won’t be disappointed!

The streams in the Duluth are are popping open. The rivers are opening up, the weather is much warmer. If you’re itching to fish, go to the inland lakes.

Kamloops Rainbow Trout (or Loopers, as they call them) and Coho Salmon might be  at the river mouths. Go and explore the bite - there are plenty of opportunities!

Lake Trout and Coho Salmon fishing is on fire! They are around in good numbers and are pretty active. As well as that, Steelhead fishing has begun!

Fishing is hot right now! Trollers and jiggers are taking Walleye on the St. Louis River. Other anglers are trolling for Coho Salmon on Lake Superior. That’s where the larger fish are!

Yes, Walleye are still there and Salmon fishing is still hot. Lake Trout are the meat & potatoes around the area. Boats are returning with 20+ fish - what are you waiting for?

The north shore is all about lots of action and a hot bite. Trout are being caught in good numbers, Lakers and Steelhead in particular. Salmon are also around.

Before Trout and Salmon head shallow, take a trip or two. Only a couple of weeks are left in the Lake Superior season. If the weather cooperates, Coho can be your main target.

Stream fishing is in its full force right now with fresh Steelhead patrolling the waters. The St. Louis River and Lake Superior are both producing Walleye.

The north shore of Lake Superior is exactly where you need to be to land Kamloop Rainbow Trout. But if you want to catch something else, head to the St. Louis River. Walleye are caught by slow-trolling.

Fish the harbor for Walleye if you are up to a challenge. The St. Louis Bay can produce some fine ice-fishing. Who knows, you might even get your Christmas dinner sorted out!

Reviews of Fishing in Duluth