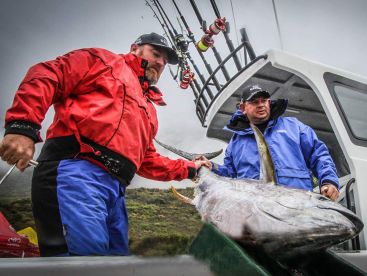 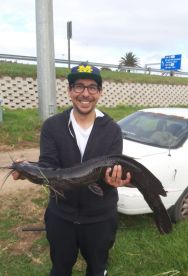 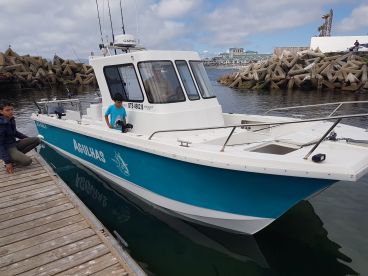 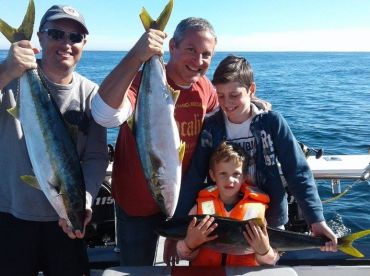 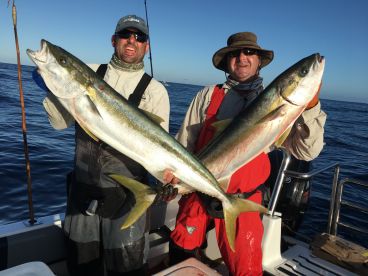 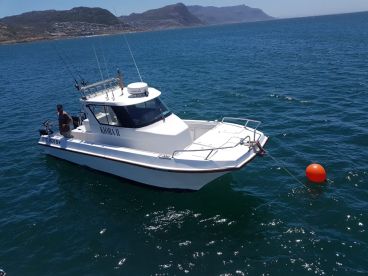 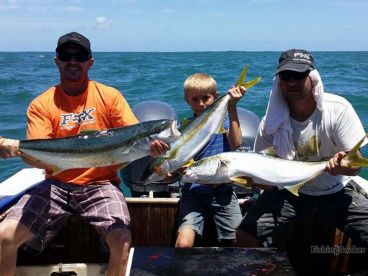 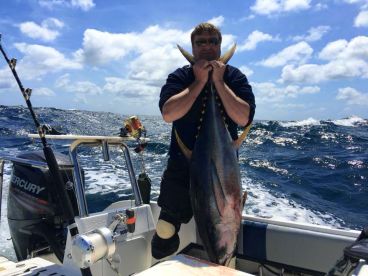 The city of Cape Town grew out of a little more than a speck of dust. Its mighty long history almost lends itself to legend, and same goes for fishing its waters. Lying at the meeting point of two oceans, fishing spots in Cape Town have witnessed some of the most iconic Tuna and Marlin catches throughout the years. Numerous fishing charters around the city provide some of the finest big game outings.

Since it was established, the city flourished as a supply port - streams of people passed by, cultures clashed and merged, and the city finally emerged as the capital of South Africa. It is now a modern city that offers some of the finest big game fishing in the world. Few places around the continent will allow you to experience the diverse offerings of the Indian Ocean quite like these historic waterways.

Big game. Super big game. When you plan your Cape Town holiday, the first thing on the bucket list should be Yellowfin Tuna. Then, just below your rods and reels, write Marlin. You can then add Yellowtail, the local fish market, and many restaurants that serve juicy fish. Numerous fishing shops are scattered around the city, so you can easily equip yourself with proper gear.

Talking of local delicacies - Cape Snoek is a feisty little beast. Its razor-sharp teeth can easily take a sudden turn, so even more experienced anglers should watch out. Once you land it, enjoy its taste Cape Town style - braai it with your fellow travelers.

Another great fish to cast your lure after is Geelbek, also known as Cape Salmon. Its Afrikaans name means “yellow mouth”, so you will have easy time recognizing it. It’s not only what’s in the name, it’s also what’s in the taste - Cape Town’s version is said to be juicier than its European counterpart.

The nourishing coastal waters surrounding the city bolster a medley of vivacious marine life, including trophy pelagics, as well as sharks, dolphins, marine birds, cetaceans and many others.

Often considered Disneyland for inshore enthusiasts, Hout Bay is brimming with Yellowtail and the elusive Snoek, as two of the area’s most prominent targets, along with reliable seasonal additions of Cape Salmon, Kob and much more.

False Bay is another great spot to get hold of the oily Snoek. Do take care - fishing from the rocks may seem adventurous, but high tide marks can easily get swept away by the killer waves.

Heading further offshore, and in for some super big ones - between 30 to 40 miles offshore, it’s open water Tuna galore, with Yellowfin and Longfin Tuna prowling the hotspots. They are ready to crash your spread without so much as a notice.

Blue and Mako sharks have also been known not to pass on a well-presented bait, along with the likes of Mahi Mahi, Yellowtail, and even an occasional Striped and Black Marlin! Many 900 pound Black Marlins have been caught here, and another grander could be easily waiting near.

Cape Town can get really warm. Both the temperature and fisheries boom in summer months, while winters stay moderate and wet.

Before you head out to hot fishing spots in Cape Town, there’re couple of things to understand. The government invests a lot of effort to preserve the diverse marine life. This means that respecting regulations and their work is welcome and can help everyone have a nice time.

If you’re looking for recreational fishing - meaning sports or pleasure - you’ll need to get out your fishing permit. It lets you fish for a period of one month to up to a whole year, and can be obtained at any office authorized by the Ministry of Agriculture, Forestry and Fisheries.

As regulations on particular species may vary from time to time, the safest road is to get in touch with your local fishery control officer. Do bear in mind that you are not allowed to sell or trade the fish, and that some species cannot be caught year round. We’ll go into that in a second, codename: fish calendar.

If there is one thing fishing in Cape Town should be about, that’s Yellowfin Tuna. Once you reach some 20 to 50 miles offshore, you’ll want to try trolling or live bait - use Sardines. Most Cape Town fishing charters have a trip or two to get the big ones as the area is one of the most densely populated Tuna spots in the world. When Sardine start their run towards the coast of Mozambique, predator Tuna follows close behind.

Trolling also works beautifully when fishing for Yellowtail. They give in to spinning, jigging and live bait, and feed near the coast and above rocky areas. The local stars, Snoek, stick around for the better part of the year - these ferocious fanged fish will chomp your lures and bait. Once you find them, spinning is the answer. You can also use drifted baits, spoons or jigs.

As you head out, you will see numerous harems of seals that sit in the sun on the rocks. Shark will strike there. The brave anglers who venture out can also catch big game on the fly. Or, go surf fishing - this is proven to be a lucrative method to get hefty Kob, more so if you experiment with lure size, shape and color.

On the other side of the spectrum - Bass, Trout, and Carp. Fishing in Cape Town fresh waters is a feast. There are plenty of lakes, dams, and rivers. Beginners will find superb training grounds there and can employ fly fishing.

Cape Town
4.29
Based on 19222 reviews by FishingBooker anglers

The weather is warm and fine, and Yellowtail is biting prime time. Big schools of these feed near the coast, so head there. Kob and Geelbek also galore, while the likes of Yellowfin and Longfin Tuna are solid.

Cape Town fishing is on fire. Kob, Geelbek and Yellowtail still bite as crazy, with an occasional Mahi Mahi, or Yellowfin Tuna. Set your hopes high - Black Marlin might be around!

Showtime! Yellowfin Tuna are in abundance, so head offshore. Longfin Tuna are also a common sight this time. Yellowtail, Kob and Geelbek bite with same fervor as before, so a lot of fine inshore angling.

Temperature is going down, but it’s still warm and sunny. The sea is brimful of Yellowfin Tuna, Longfin Tuna, Geelbek and Kob. Yellowtail is also around, so sharpen your rod! Snoek is subdued still.

The big ones are still around offshore. For maximum amazement, try fly fishing for Yellowfin Tuna. Near the coast, Snoek and Yellowtail put up a good fight. In rivers, hefty Trout prepare for winter months, so head up.

Winter has come, and Cape Town fishing season is in the blue. Snoek now reign the salty inshore, so you can go for it. Still, plenty of fun on rivers and dams - try fly fishing for Salmon and Trout.

July is dark and full of Snoek. With only 5 hours of sun on the average, July saltwater fishing is depleted compared to its summer heydays. If you’re feeling like inshore fishing, then sure come and visit. Else, head out to rivers and dams.

The wettest month of the year offers Snoek, and seldom Yellowtail. You can always test your luck and fill your bags with a fish or two, but don’t expect supreme catch. Rivers and dams offer Rainbow and Brown Trout.

The heat is slowly rising. Snoek and Yellowtail are still a fair sight. In rivers, look out for Trout - some of them might literally rattle as they are pulled up from water from all the snails they eat.

As the sea offer rebounds, major action is taking place everywhere. Still, Cape Town’s drawcard is strong Yellowfin Tuna that swim offshore. As you head there, you can see the likes of Yellowtail, Geelbek and Kob.

November brings warmer sea, which means Cape Town fishing is about to get hot. Catch Yellowtail and Geelbek. You can go after Kob standing surf fishing style. Out in the open, Yellowfin and Longfin await.

Cape Town waters get replenished. Priority number one should be Yellowfin Tuna. Other items on the menu include Yellowtail, Kob and Geelbek.

Reviews of Fishing in Cape Town