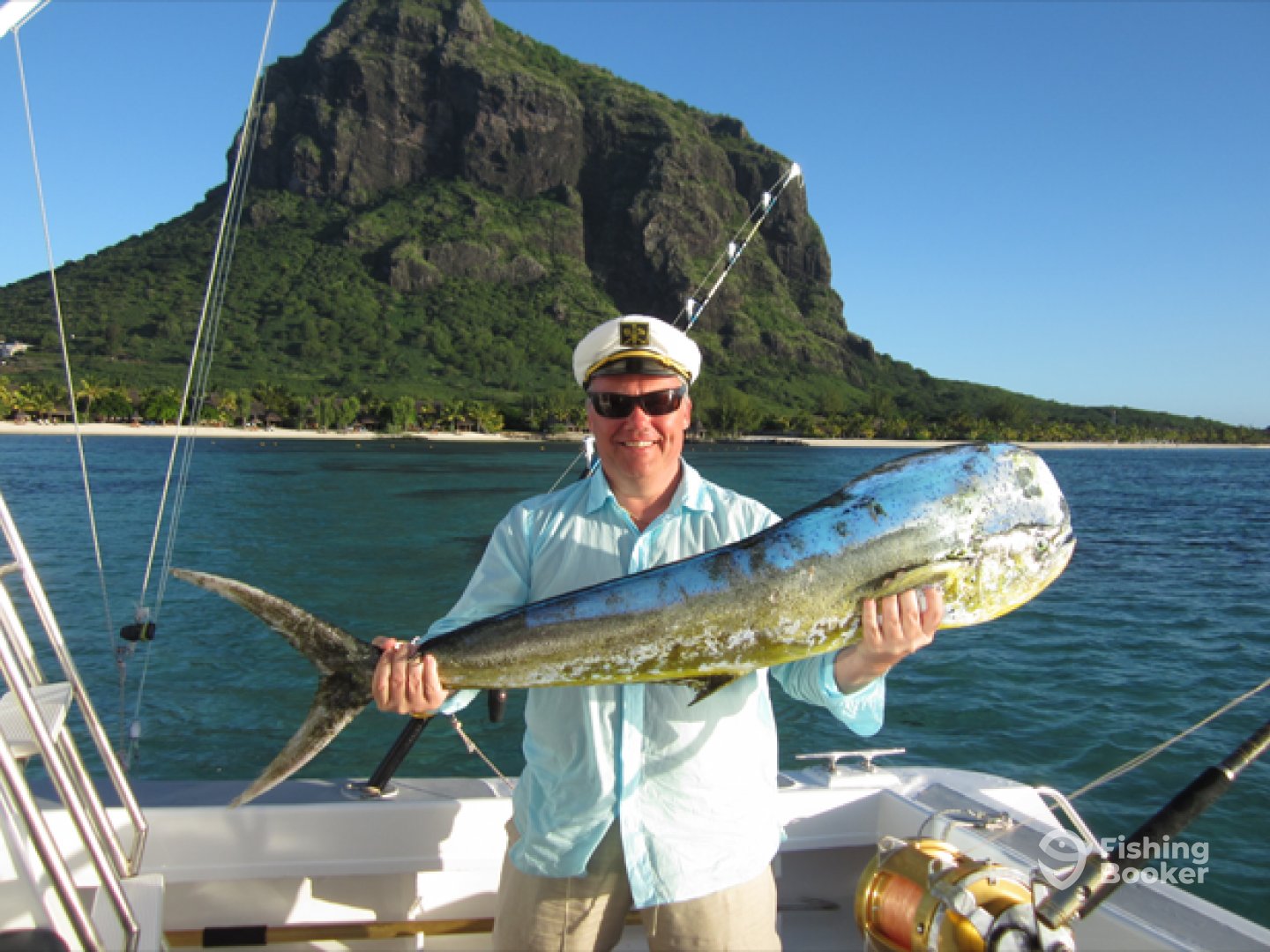 Explore these waters on Maranatha – a 40’ Berger offshore sportfishing boat restored in 2020. It’s powered by twin 160 HP Yanmar engines, and it’s a safe, fast, and comfortable ride to the fishing grounds. Maranatha has access to fresh water, as well as a private restroom. The boat can comfortably fit up to 8 people, so take your friends and family on a fishing expedition! 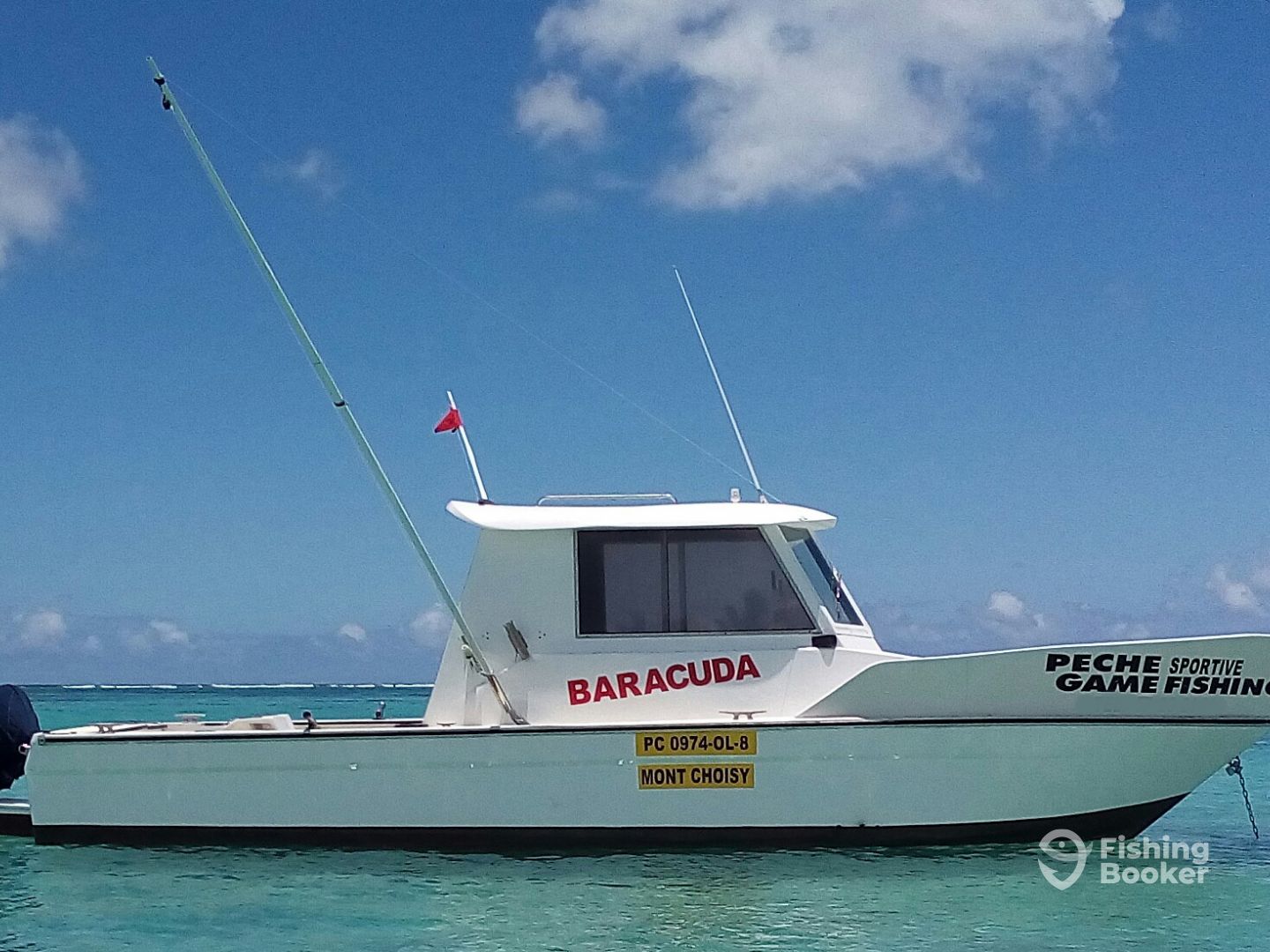 You will troll to the fishing grounds and then fish for live bait on the spot. Depending on the time of year, you will target Tuna, Mahi Mahi, Wahoo, Marlin, and other big game species. You can come aboard for several hours and fish nearshore, or spend half the day onboard and travel up to 12 nautical miles offshore. 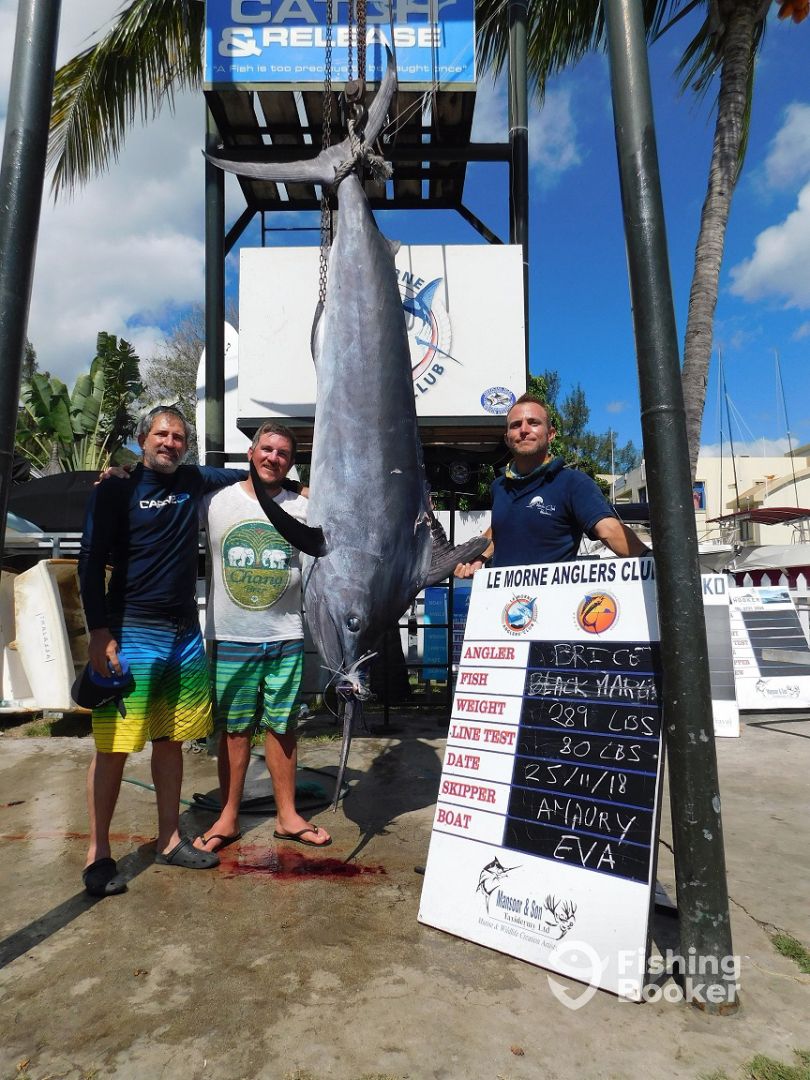 It’s time to book an unforgettable adventure in Mauritius with Marlin Cruise. Give yourself the best opportunity to target awesome big game with Captain Amaury De Cambiaire. With nearly a decade of experience, he knows the best places to take you to make sure you have the most productive day out on the water. 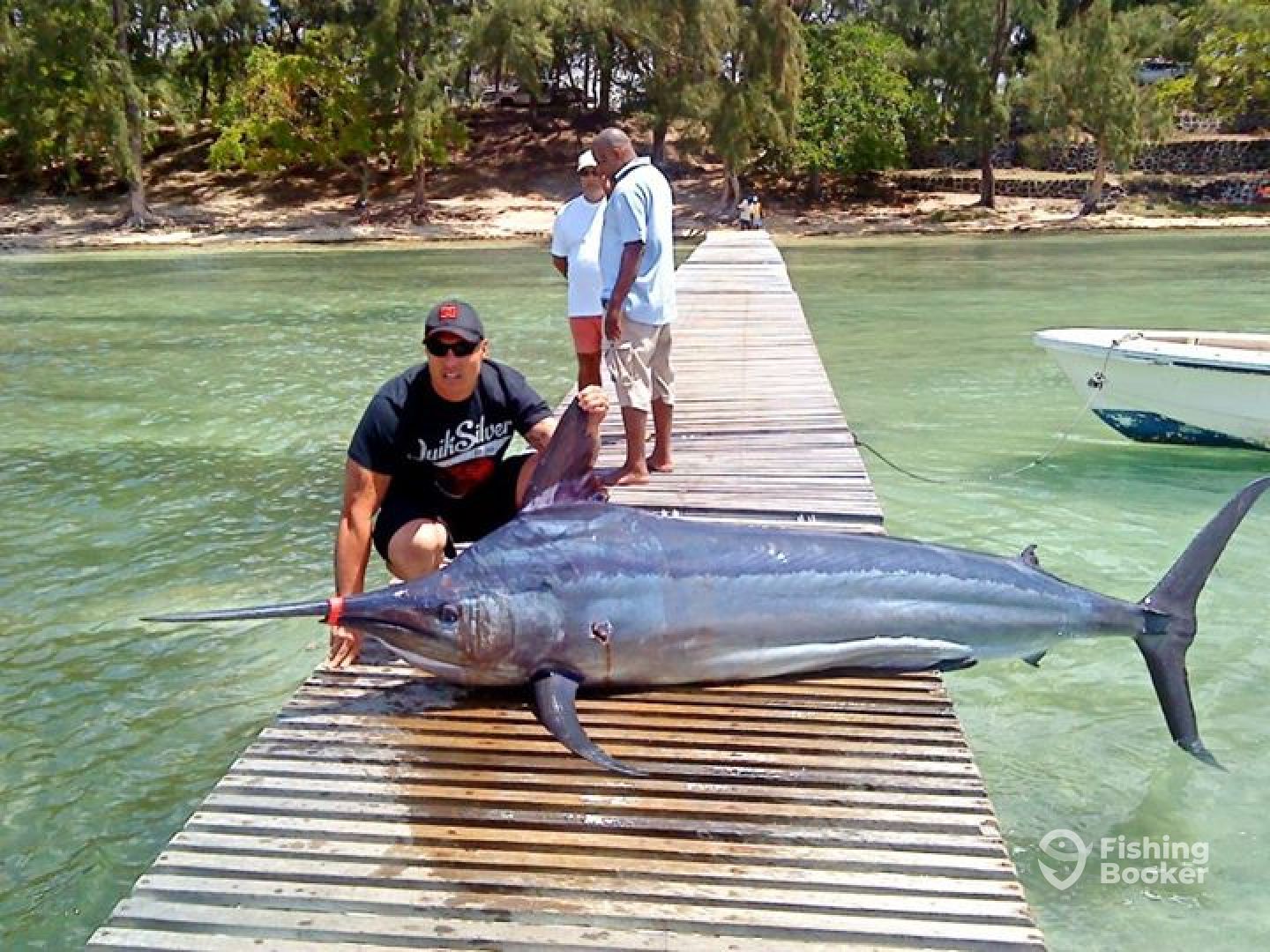 For fishing, the crew uses Penn and Tiagra rods and reels. The deck has 3 fighting chairs – the main one and 2 auxiliary chairs. There’s a variety of lures you can use, mainly for targeting big game pelagics. Of course, if you never go anywhere without your lucky rod, you’re welcome to bring it on board.

Try deep sea fishing Mauritius once and you will be hooked forever. These waters are home to world renowned big game trophies such as Yellowfin Tuna, Mahi Mahi, Wahoo, Black Marlin and the ultimate prize: Blue Marlin. Every angler has a chance to set a new record here, trolling just 5km (barely more than three miles) from shore.

You can enjoy excellent fishing in Mauritius all year, but the best time to target big game fish runs from October to April. These summer months produce ideal conditions for Sailfish, Wahoo, Mahi Mahi, Yellowfin Tuna, Dogtooth Tuna, Skipjack Tuna, and large Shark species. If it’s the coveted Blue Marlin you’re after, chances of landing this catch are highest from December through March. On the other hand, you will find Black Marlin biting the most in winter, from May to November.

Deep sea fishing in Mauritius mostly involves trolling with heavy tackle. Anglers use live bait, artificial bait, and rapalas, depending on their target species. Some fishermen prefer trolling with live bait such as Bonito or young Tuna when targeting Marlin, Dogtooth Tuna, and Sharks. You can use rapalas while fishing for Wahoo, Yellowfin Tuna, Dogtooth Tuna, and Barracuda. Jigging is also effective when targeting Mahi Mahi and some other species.

The best big game fishing Mauritius has to offer can be found near Black River in the West, Trou D’Eau Douce in the East, Grand Bay in the North, Grand River in the South, and Le Morne in the Southwest.

Mauritius
4.28
Based on 19,481 reviews by FishingBooker anglers 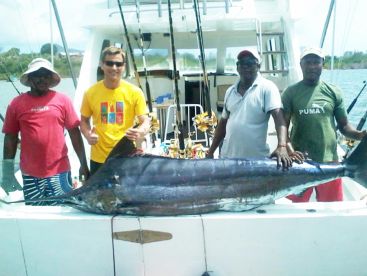 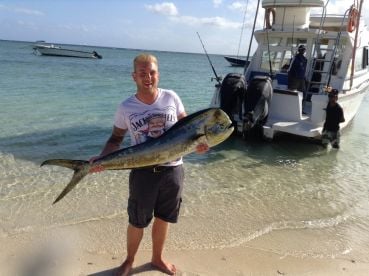 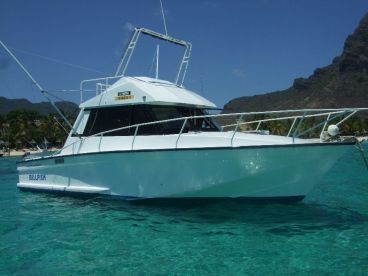 day fishing 5/2/20
Stuart M. fished with Billfish on February 5, 2020
Yes i would recommend going there in February
Full day
Magnus W. fished with Royal Big Game Fishing - Royal II on January 24, 2020
Be prepered and well trained......this is fun for real
Half day trip with very kind Captain Amaury De Cambiaire, Grande Riviere Noire
Jens S. fished with Marlin Cruise on January 4, 2020
Don´t expect to catch always Blue Marlen, we got a 21.3 kg Giant Trevallor and it was picked up for Restaurant after taking Picture. The Ocean has many surprises and this is what you should looking for. Perhaps the list of fishes to be cought there should be Extended after that catch.
Full day trip
Sharon L. fished with Club 1034 – Lady Diana on September 9, 2019
To pick a day where the weather is good failing which be prepared for rough seas and possibility of sea sickness which is unfortunate ??
6 hour trip
Gustav O. fished with Maranatha Sport Fishing on August 2, 2019
Book this trip! Excellent service from a very nice, friendly and professional father and son! They know their fishing, even I as an amateur can tell that. Next time we are in Mauritius we will go with them again.
Yellowfin for supper
Simon E. fished with Albatross on July 23, 2019
Not so many or the big fish round at this time , so a simpler, nearshore trip with plenty of variety was perfect
An extended day
Eduard J. fished with Fishing Master on July 9, 2019
Check with the captain about keeping the catch or not. If you want to keep the catch you will probably have to pay for it. Bad practice, but common in Mauritius.
Full day with captain Kevin
Paul D. fished with Coeur De Lion on May 24, 2019
The skipper (Kevin) and crew are friendly and try everything to put you in the fish. All of the equipment is top of the line and looked after. The boat is fast to get you to your locations quicker and has everything on it you need for an enjoyable day out.