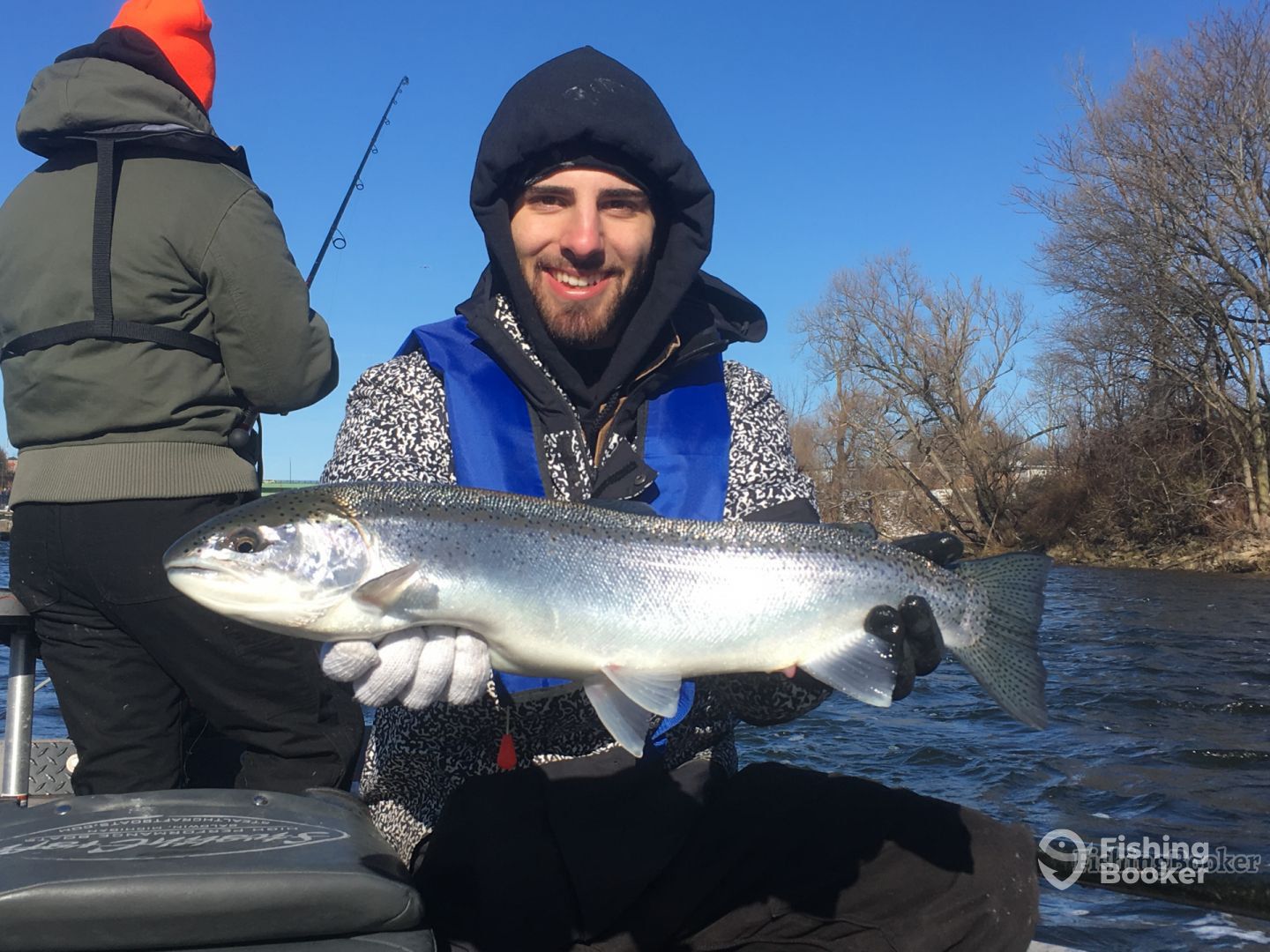 Come aboard his 18’ Stealthcraft power drifter with a 40 HP Mercury engine and enough room to accommodate up to 3 people. You’ll have quality Lamiglass rods and reels to use, and if you’re a fly rodder, your guide will bring the fly fishing gear with him, just let him know in advance. 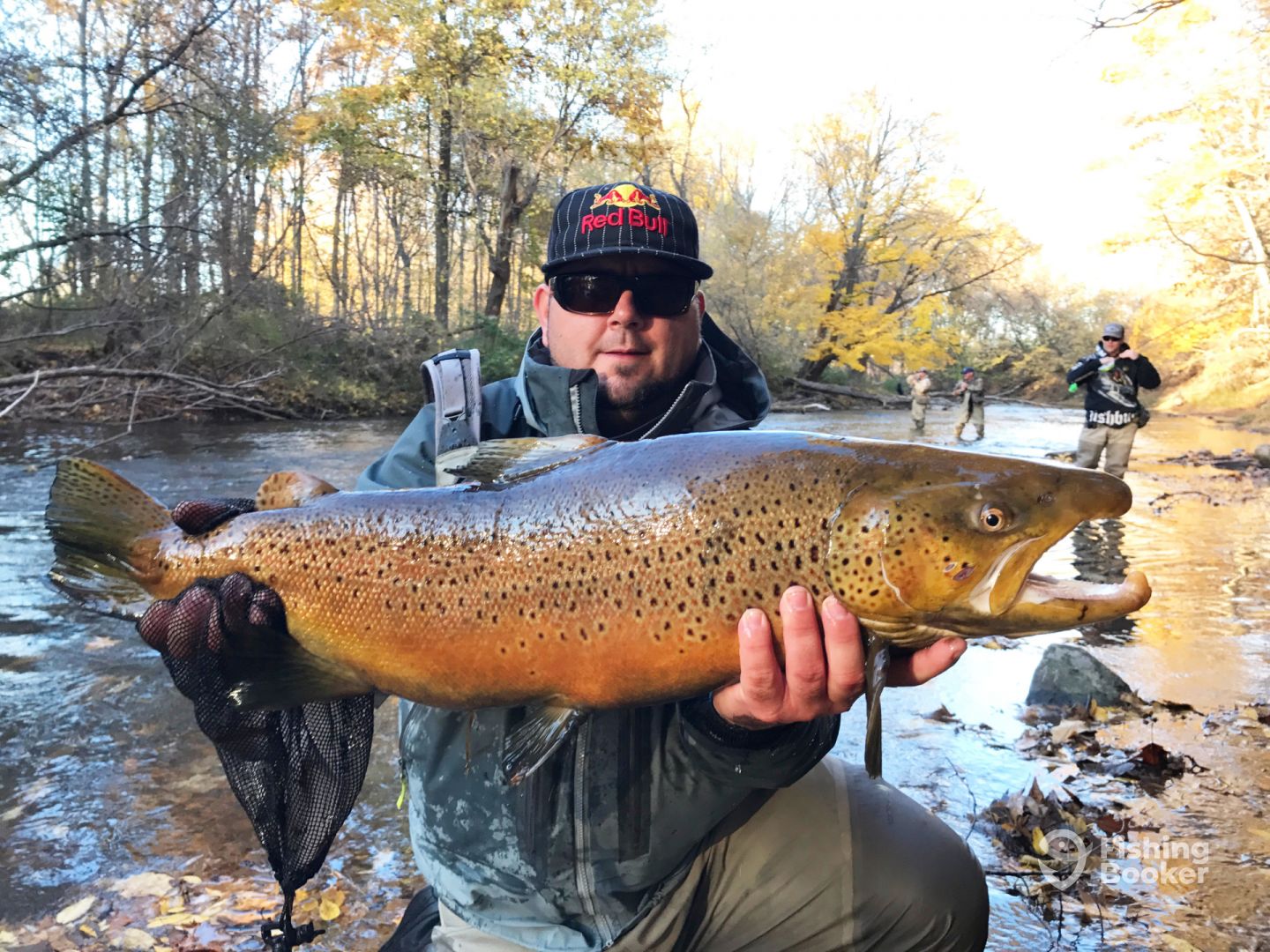 If you’re suffering from “Salmon Fever,” then the cure you’re looking for is Reel Addicted Charters! Captain Michael Ford specializes in Salmon and Trout fishing, running charters from the Hudson and Salmon River, as well as Lake Ontario. He holds both a USCG Master and New York State Guide License and knows all the sweet spots to land you a keeper. 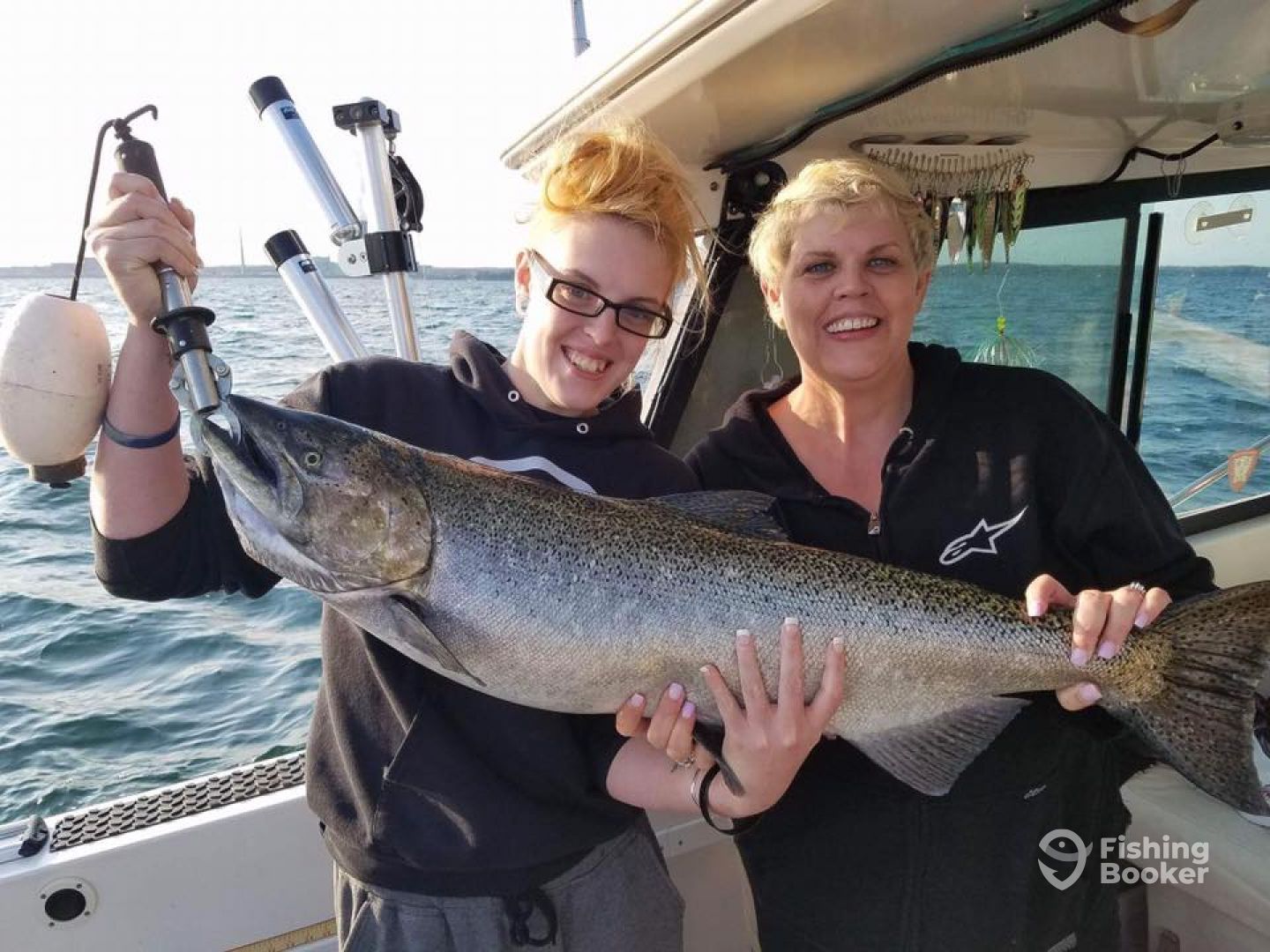 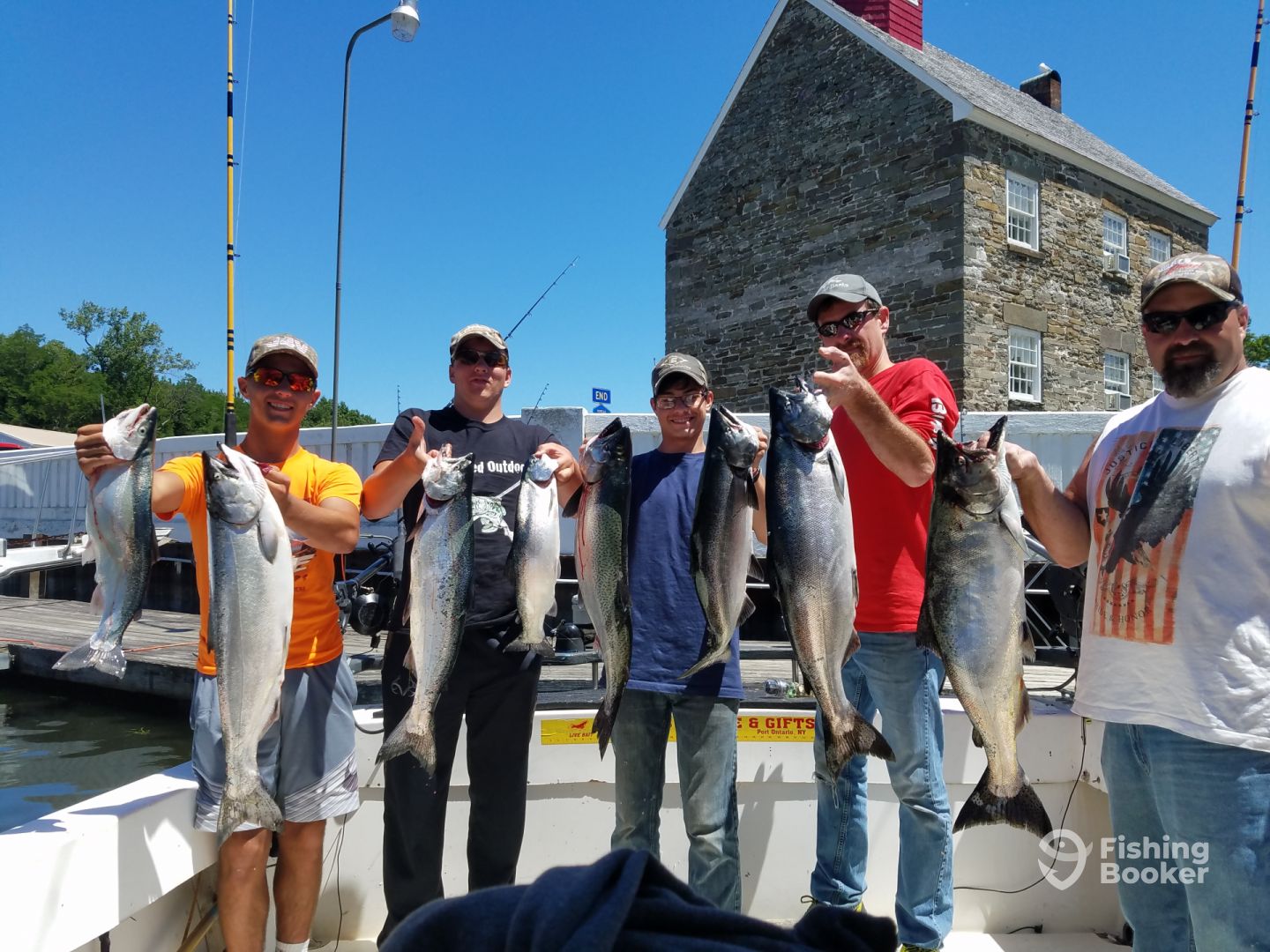 Anglers who are itching for some freshwater action will enjoy the offer from Black Jet Charters. They are situated in Pulaski, New York, close to the shores of Lake Ontario. When you are in the neighborhood give them a call and Capt. Matt Bell will give you a chance to have a great time and maybe bag a tasty fish. Families with children are welcome!

Oswego River fishing offers year-round opportunities for over 45 species of game and panfish. Even though Lake Ontario eclipses it in size, the Oswego River is home to more fish than any other Great Lakes’ tributary. From championship Bass and Salmon to migratory Steelhead, there is always something biting.

It’s easy to get overwhelmed by the list of potential catches in the Oswego River. It is home to the majority of freshwater species that you can even name. Anglers catch Chinook and Coho Salmon, Walleye, Smallmouth and Largemouth Bass, Northern Pike, Steelhead, Brown Trout, Yellow Perch, Channel Catfish, Sheepshead, and many more.
The river is most generous in springtime when anglers can encounter any species of fish from t Lake Ontario itself. April and May are rich with Steelhead, Brown Trout, Catfish, Freshwater Drum (Sheepshead), and Yellow Perch.
Summertime is great for Largemouth and Smallmouth Bass fishing. Walleye fishing is also on fire during the summer months.
Fall is great for trophy Salmon lovers. Large schools of Chinook and Coho begin staging at the river mouth. As the waters cool down, they begin to enter the river. Brown Trout and Steelhead don’t keep anglers waiting. They enter the river shortly after Salmon. Steelhead remain in the river during the winter months.

How to fish in Oswego River?

The beautiful Oswego River begins at Three Rivers, goes through the city of Oswego, and empties into the mighty Lake Ontario. The first dam in Oswego blocks the fish migration upstream. It goes without saying that this is the hotspot for all the river’s fish!
Wading below the dam can be difficult. The Oswego area has a large number of experienced and professional guides. The area holds a large fleet of boats so finding a local captain won’t be a problem at all.
The majority of the river guides prefer fishing on drift boats. These ‘water taxis’ allow you to cover much more water on your trip, which makes a big difference.
Spring and autumn Steelhead is usually caught on egg sacs, worms, plugs, and egg-imitating plastics. Brown Trout hang out at the river’s mouth and can be caught by casting with spoons or trolling stickbaits.
Summer provides great Bass and Walleye fishing. Smallmouth and Largemouth are usually caught on artificial bait, such as plastic, crank, and spinnerbaits. Live bait can also produce good results if you use crayfish, minnows, and worms. Troll for Walleye after dark for greater results.
Early fall is good for large schools of trophy Salmon that stage at the river mouth. Troll for them with flashers, cut-bait, and J-plugs. As the water cools, Salmon enter the river and can be caught with egg sacs, skein, plugs, and egg-imitating plastics. When Trout enter the river shortly after Salmon, they can be caught using the same technique.
During the winter months, you can fish for Steelhead after a few days of mild weather. Find deeper holes or slack water areas and bottom bounce eggs sacs.
If you are a fly fishing enthusiast, head to the north side of the Oswego River. The local guides generally prefer using a floating fly line, a weighted fly, and a leader. It’s very common to hook Steelhead and Brown Trout!
Oswego
4.66
Based on 20,001 reviews by FishingBooker anglers

Amazing experience
Michael C. S. fished with LATER ON Charters on August 17, 2020
I would recommend anyone that love to fish. Please get to OSwego and enjoy this amazing experience!
Half day trip with Captain Paul
Albert L. fished with Knotlost Charters on July 6, 2019
Make sure to do some stretching these big boys put up a fight
Half day fishing Trip with Captain Eric
Chakerie M. fished with Second Nature Sport Fishing Charters on June 29, 2019
To be patient while fishing because every day is definitely different. It may have some periods of waiting for a bite, but the Captain and 1st mate will never stop searching for a great spot.
Half day trip with Captain Paul
Richard C. fished with Knotlost Charters on May 5, 2019
The spring is for trout and maybe a stray Salmon here or there if you go to Oswego you will catch a fish. The Fall season is for Salmon both seasons are an incredible time.
Two Days of Non-stop Action
Nicholas B. fished with Broad Horizons Guide and Charter on April 13, 2019
Always a roll of the dice with April weather in Upstate NY but it turned out great for us. We caught our limit and more and even got an early season King. Recommend 100%.
Half Day Trip with Capt Paul
Michael A. fished with Knotlost Charters on August 24, 2018
We had some rough waters. The Capt did say a few trips were cancelled during the week leading up to ours. We still had a great time!
if you have always woundered ???
FishingBooker Member fished with Second Nature Sport Fishing Charters on August 19, 2018
Safty frist always, and have a great time !!!
Another great day with Second Nature
FishingBooker Member fished with Second Nature Sport Fishing Charters on July 29, 2018
Sunscreen, plenty of refreshments to keep hydrated and make sure to take the appropriate measures if you get seasick. Also make sure you get your fishing license before you get onto the boat